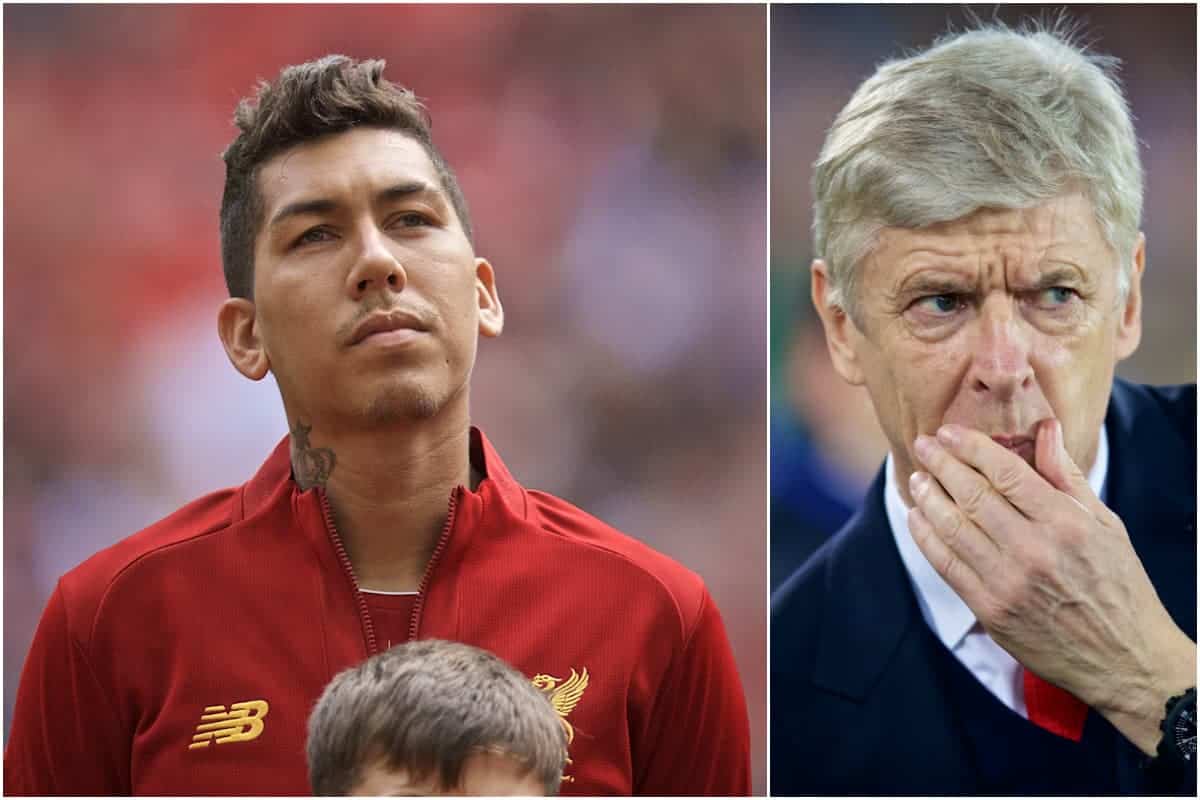 Arsene Wenger has explained how it is “difficult to find” a striker like Roberto Firmino, praising the No. 9 for “sacrificing himself” for Liverpool’s success.

Four years into his career on Merseyside, it is remarkable that Firmino can still be described as underrated.

But he remains so, with the 27-year-old not widely considered one of the best players in the world despite his consistently top-level performances for club and country.

It is Firmino’s team-first outlook that holds him back in his regard, but this is certainly for Liverpool’s gain as he is able to operate under the radar as arguably Jurgen Klopp‘s most important player.

Along with his 68 goals in 198 games—50 of which have come in the Premier League to make him the top-scoring Brazilian in the history of the English top flight—he is defensively and creatively crucial.

This is something Wenger attested to in his sage evaluation of Firmino’s role in the Liverpool attack, arguing that it is easy to “forget” him as Mohamed Salah and Sadio Mane receive the plaudits.

“I like [Salah] very much, he has huge potential, and Mane as well,” the Frenchman told beIN SPORTS.

“But you forget a little bit, the guy who sacrifices himself is Firmino.

“And like Suarez did for Messi and Neymar, [he is] the guy who works for the team, who works for everybody and gets them to shine.

“This piece of the jigsaw is always very difficult to find: a striker who is generous.”

By contrast, Wenger praised Salah in comparison with Lionel Messi, but argued that the Egyptian is “obsessed” with scoring, and would become a more well-rounded player with age.

“He’s 20 goals away [from Messi] basically, if you want to be as concrete as possible,” he continued.

“He has similarities with Messi, [but he] must find the consistency of Messi.

“He’s as good a finisher, but Messi has the complete thing, he gives the final ball as well, and Salah is a bit obsessed now with finishing himself.

This was apparent in Liverpool’s last outing at Burnley, as Salah ignored clear openings for both Firmino and Mane to score, opting instead to attempt shots on goal—much to the frustration of Klopp.

But most importantly, Wenger—whose sage view of the game should be respected—is right to acknowledge the importance of Firmino.

Praise for our No. 9 never gets old.