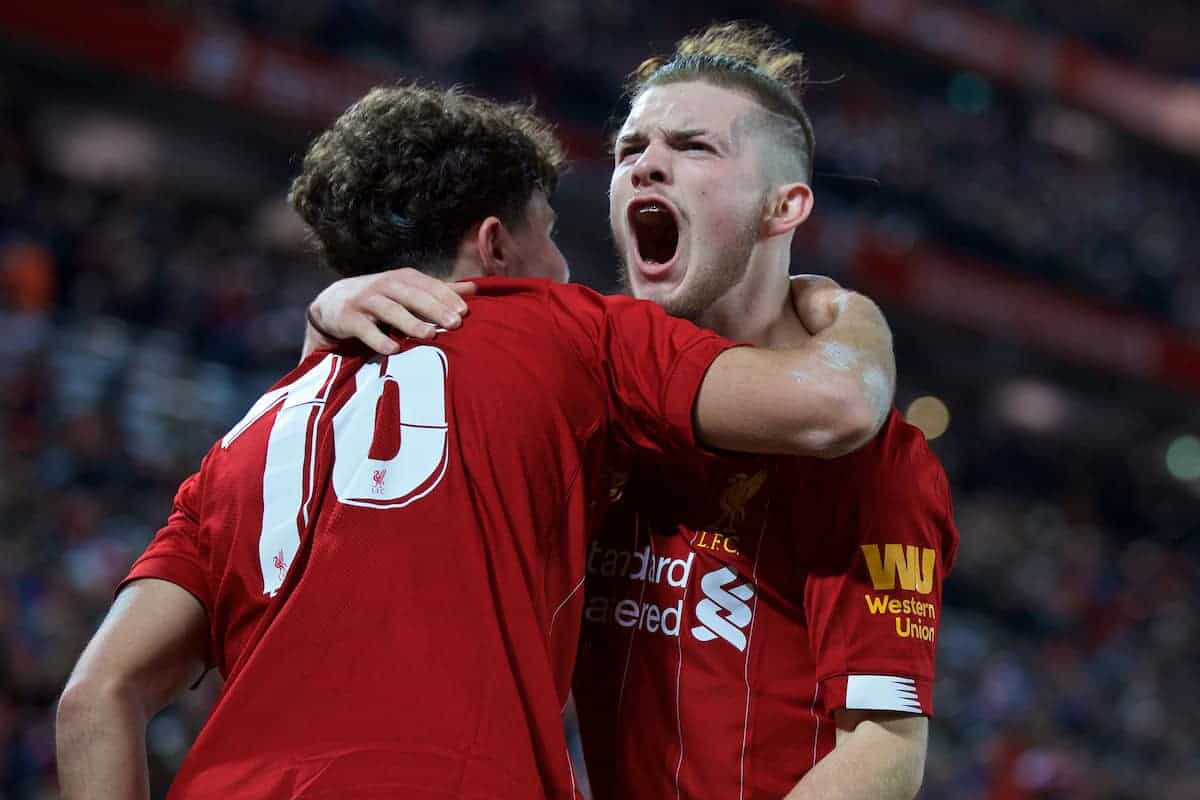 Liverpool emerged victorious on a wild night in the League Cup, with Curtis Jones scoring the shootout winner after a remarkable 5-5 draw with Arsenal.

Roars of “we are the champions, champions of Europe” flooded Anfield as a young Reds side kicked off against Arsenal, with five teenagers making their home debuts.

There was no shortage of early confidence as Caoimhin Kelleher and Sepp van den Berg played out the back and Neco Williams pumped long balls down the right, and it was the latter who set off the hosts’ opener.

It came in torturous circumstances for the Gunners, but jubilant for Rhian Brewster as he punched the air while watching Shkodran Mustafi turned in Alex Oxlade-Chamberlain‘s powerful cross for a sixth-minute own goal.

Oxlade-Chamberlain’s every touch was booed by the away fans, and every misstep jeered, and they were amplified after three goals in 15 minutes put Arsenal in front, first from Lucas Torreira and then two from Gabriel Martinelli.

Martinelli’s second came following a poor, unsighted backpass from Harvey Elliott, but the teenager had soon atoned for his mistake as he won a penalty at the other end; James Milner duly converted.

It was a first half perfect fitting of the occasion: an unbalanced, unfamiliar 45 minutes that saw errors and inexperience cost the Reds at the back, but energy and persistence pay off in attack.

It wasn’t just inexperience which cost Liverpool though, and in fact it was their oldest player, with the most minutes in his legs, whose sloppy pass at the back led to Ainsley Maitland-Niles’ strike for 4-2.

Klopp soon turned to his substitutes’ bench as Jones replaced the wholly anonymous Naby Keita, amid fears the Guinean had suffered a groin injury.

Liverpool seemed to spark into life after the change, and were back on level terms soon after through a pair of stunning strikes from senior players, Oxlade-Chamberlain just pipping Origi for the most impressive of the two.

Joe Willock did his best to challenge that goal from his predecessor, though, and Arsenal were back in front with 20 minutes to go as the undeserving Kelleher was beaten for a fourth time.

And as the clock ticked down, in the fourth minute of stoppage time, Liverpool ensured the game went to penalties with a brilliant late equaliser from Origi, who hooked home Williams’ excellent cross.

That set a penalty shootout decided by Kelleher, who dived the right way to stop Dani Ceballos and book the Reds’ place in the quarter-finals.