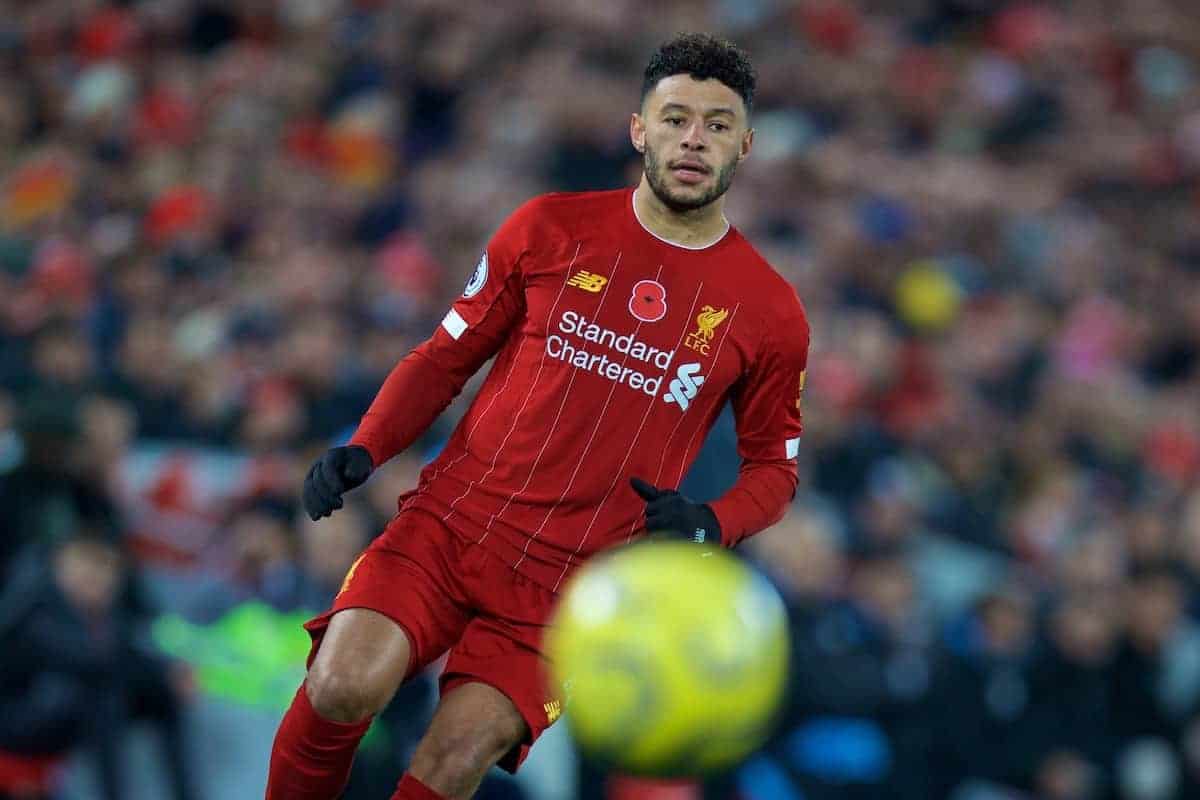 Jurgen Klopp has an early opportunity to test his options without Fabinho as Liverpool host Brighton in the Premier League on Saturday afternoon.

Fabinho was already set to miss this weekend’s clash due to suspension, before an ankle ligament injury ensured he will also miss the rest of the year.

It is a major blow for Liverpool, and one which may have altered Klopp’s plans for this game as it is less a case of an enforced rest for his No. 3 and more an enforced, long-term reshuffling of the ranks.

Brighton head to Anfield sat 12th in the table, with manager Graham Potter buoyed by a new two-year contract extension after just 13 league games in charge.

For the Reds, the visitors provide an opportunity to respond to a disappointing 1-1 draw with Napoli in midweek, and at least maintain their eight-point lead at the top of the league.

Here’s how Liverpool could line up against the Seagulls.

Fabinho joins Joel Matip on the treatment table at Melwood, with the one-time centre-back partners both sidelined for an extended period.

In his pre-match press conference, Klopp said the club are “not sure 100 percent” on how long the Brazilian will be sidelined, but “it looks pretty sure he will not be involved in the Christmas fixtures.”

Meanwhile, Matip is set to undergo another scan on his knee injury on Friday, in order to determine any progress or setbacks, but he will certainly be absent this weekend.

The positive news, however, is that Naby Keita has recovered from illness and could be back in the matchday squad.

The Guinean, along with Xherdan Shaqiri, provides an alternative for Klopp ahead of a busy stretch that will see Liverpool play 12 games in 37 days.

Klopp added that there were no new injury problems barring Fabinho, with those who didn’t feature against Napoli training on Thursday.

Fabinho‘s absence is undoubtedly a major blow for Liverpool, with the ex-Monaco midfielder one of the best-performing, most important players this season.

There is no like-for-like replacement for Fabinho, but Klopp has emphasised that the Reds “have solutions,” naming Jordan Henderson, Gini Wijnaldum and Adam Lallana as options.

Lallana has barely been tested as a No. 6 in a competitive game, and it is more likely either Henderson or Wijnaldum will slot in as the deep-lying midfielder—the latter did so against Napoli, when both were on the pitch.

For one player in particular, the negative of Fabinho‘s injury could turn into a real positive, with a first-choice starter dropping out of the side allowing Alex Oxlade-Chamberlain to step up.

Oxlade-Chamberlain has shone when called upon this season, but as he still works towards top form after a long-term layoff of his own, there remains more to come.

Like Keita and Shaqiri, the England international could provide an attractive, albeit very different, replacement for Fabinho.

Klopp made three changes to his side for the midweek clash with Napoli, and one of them arguably backfired as Joe Gomez struggled on his return to the lineup at right-back.

The 22-year-old is facing a difficult task in forcing his way back into the side and is likely to drop back out at the expense of Trent Alexander-Arnold, with the No. 66 joining Dejan Lovren, Virgil van Dijk and Andy Robertson in defence ahead of Alisson.

With the back five effectively set, and Mohamed Salah, Sadio Mane and Roberto Firmino surefire starters in attack, Klopp’s main focus will be on his midfield.

The most obvious solution is to drop Wijnaldum back into the engine room and start Henderson and Oxlade-Chamberlain as the more front-footed options.

This would require another three alterations from midweek, with Gomez, Fabinho and James Milner omitted to see the Reds take to the field like this: 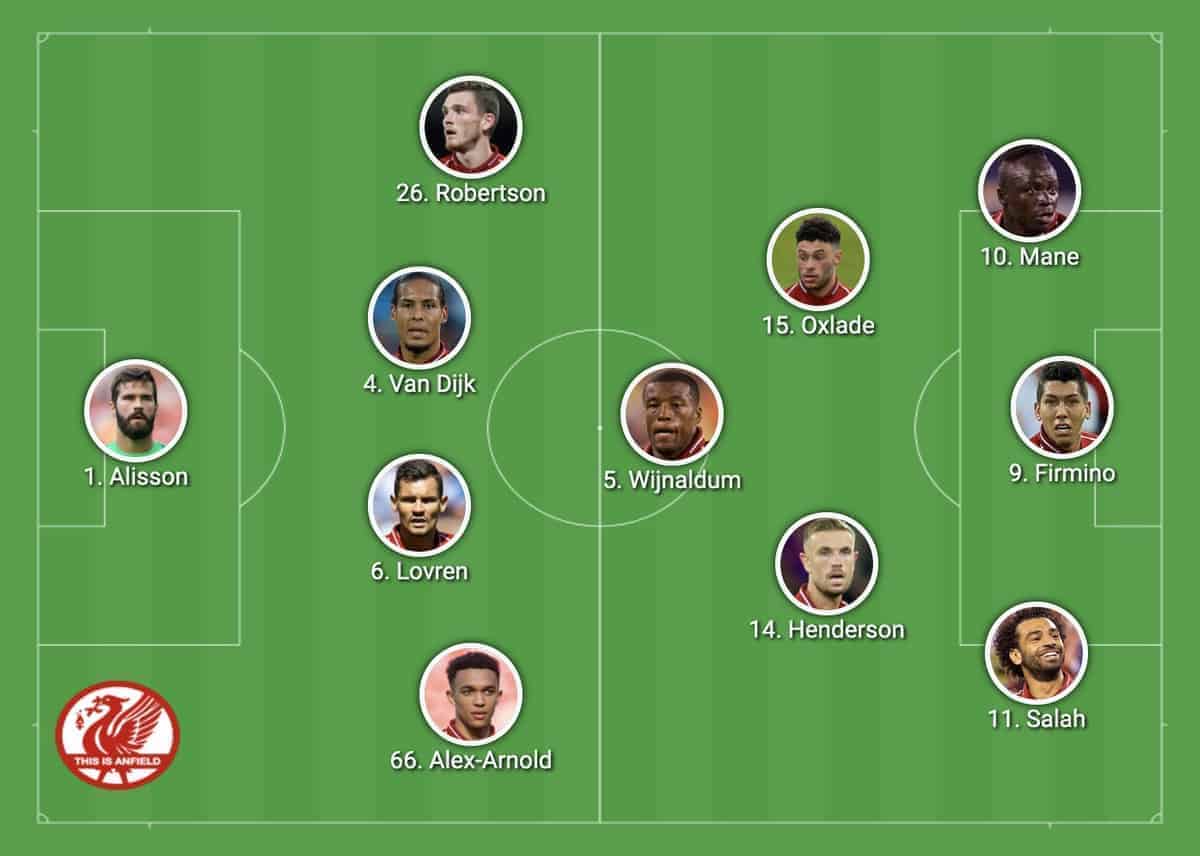 However, in discussing Fabinho‘s injury and possible solutions, Klopp did also mention that Liverpool could “change system” in order to adapt.

This presents an interesting situation, which reflects a similar stage of the season last year, when Shaqiri came to the fore in a 4-2-3-1 setup.

Though it did benefit from a more rigid ‘double six’ of Fabinho and Wijnaldum, this formation allowed the Reds to maintain form throughout the winter and sustain their title challenge until the last.

It would be undoubtedly wrong to suggest Fabinho‘s injury is a blessing in disguise, but it could prompt Klopp into a reshuffle to partner Wijnaldum and Henderson in midfield and allow Shaqiri back into the side on the right wing.

If so, Firmino could resume duties as No. 10, Mane stay on the left and Salah—who has scored all but one of his nine goals this campaign at Anfield—to move up front: 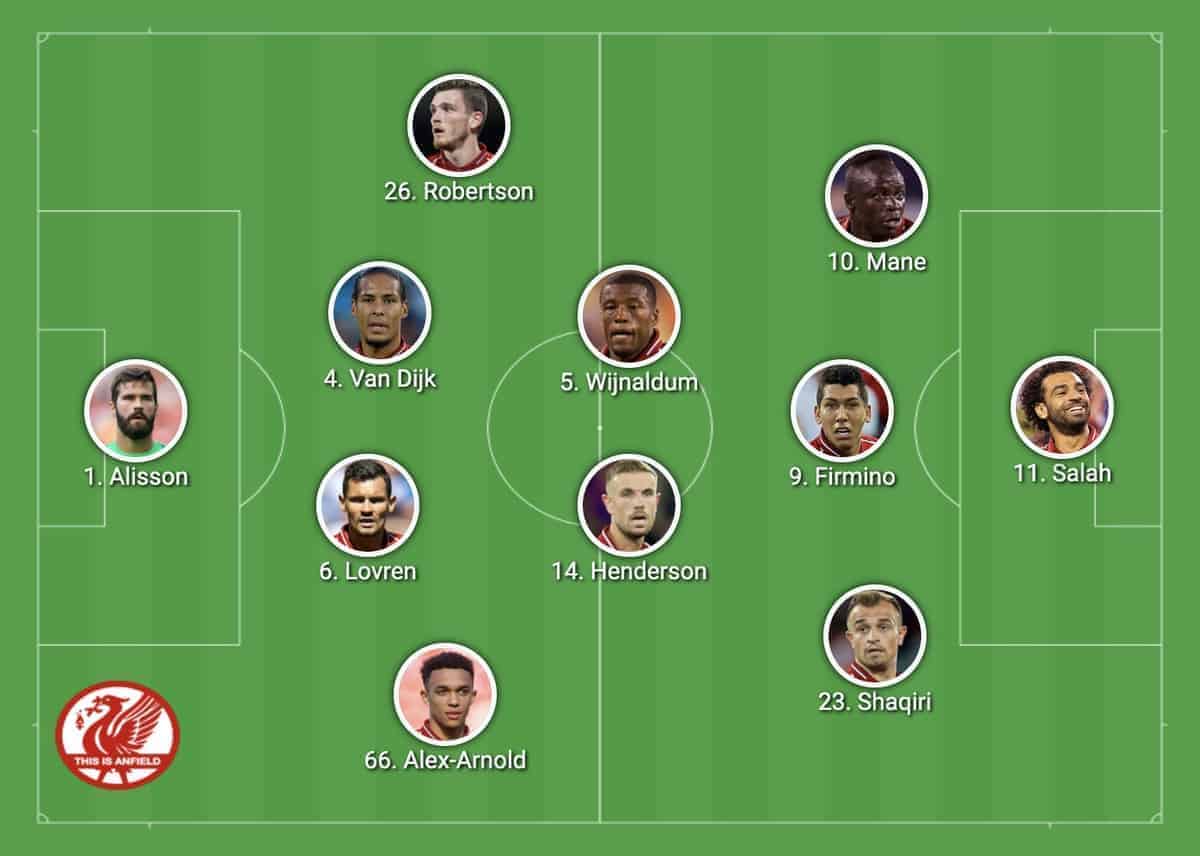 It is unlikely that Klopp will opt for such a drastic change with just two days between games to prepare, but a league clash at home to Brighton is an inviting fixture to do so.

Regardless, the aim will be for whoever comes in and takes Fabinho‘s place to step up and inspire Liverpool to a 13th win in 14.