Liverpool manager Jurgen Klopp refuses to entertain the thought a Champions League exit will enhance their bid for a first domestic title in 30 years.

The Reds currently top the Premier League by eight points from Leicester and a massive 14 points from defending champions Manchester City.

However, their European crown could be under threat against Red Bull Salzburg on Tuesday and, if they do not secure a point in Austria, they will face the prospect of dropping into the Europa League.

There is an argument, should that happen, Klopp could then write off the competition and play a second-string side in order to concentrate on the Premier League.

When it was suggested to him he could field a team of youngsters in the Europa League, he added: “Ahh! In the last 32, or 64. Whatever? Yeah interesting.

“So, we are not part of these thoughts obviously. We are really ambitious in that tournament – no really.

“So yeah, actually we want to go until the end again – we have nothing better to do in the middle of May or whenever the final is played.

“That was cool (last season) and we want to do it again. Absolutely nothing else is on our mind.

“But we know (it is) step-by-step. Tomorrow is really difficult and we have to be ready for that.”

An injury scare to Dejan Lovren at Bournemouth on Saturday threatened to leave Klopp with just two fit central defenders in Virgil Van Dijk and Joe Gomez, but the Croatia international has been passed fit and travelled with the squad.

With Joel Matip still out for at least another two weeks, having been sidelined since October 20, Klopp was asked whether he had considered bringing in reinforcements in January. 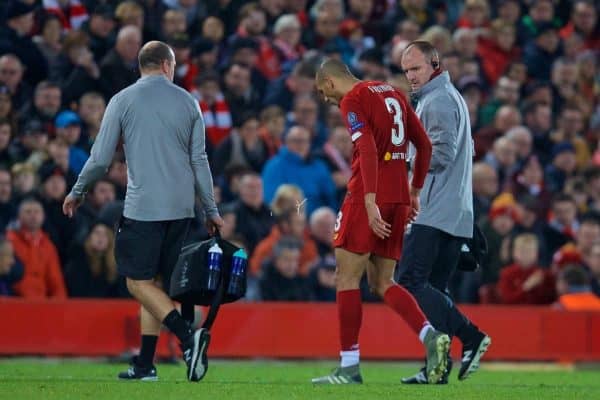 “But Lovren is not injured. It was a little bit of cramp, and it was the right moment to take him off, but it is cool, everybody is fine.

“We will not sign a centre-half because of injuries – that is the world outside who thinks we are short and we have to do it. But afterwards we would have six centre-halves and that wouldn’t make a lot of sense.

“And you need quality. You can’t have just somebody – I am somebody, I am tall, not quick but I look like a centre-half at least.”

Alisson seeks first clean sheet since Barcelona & next goal is 10,000 for Liverpool

Alisson seeks first clean sheet since Barcelona & next goal is 10,000 for Liverpool