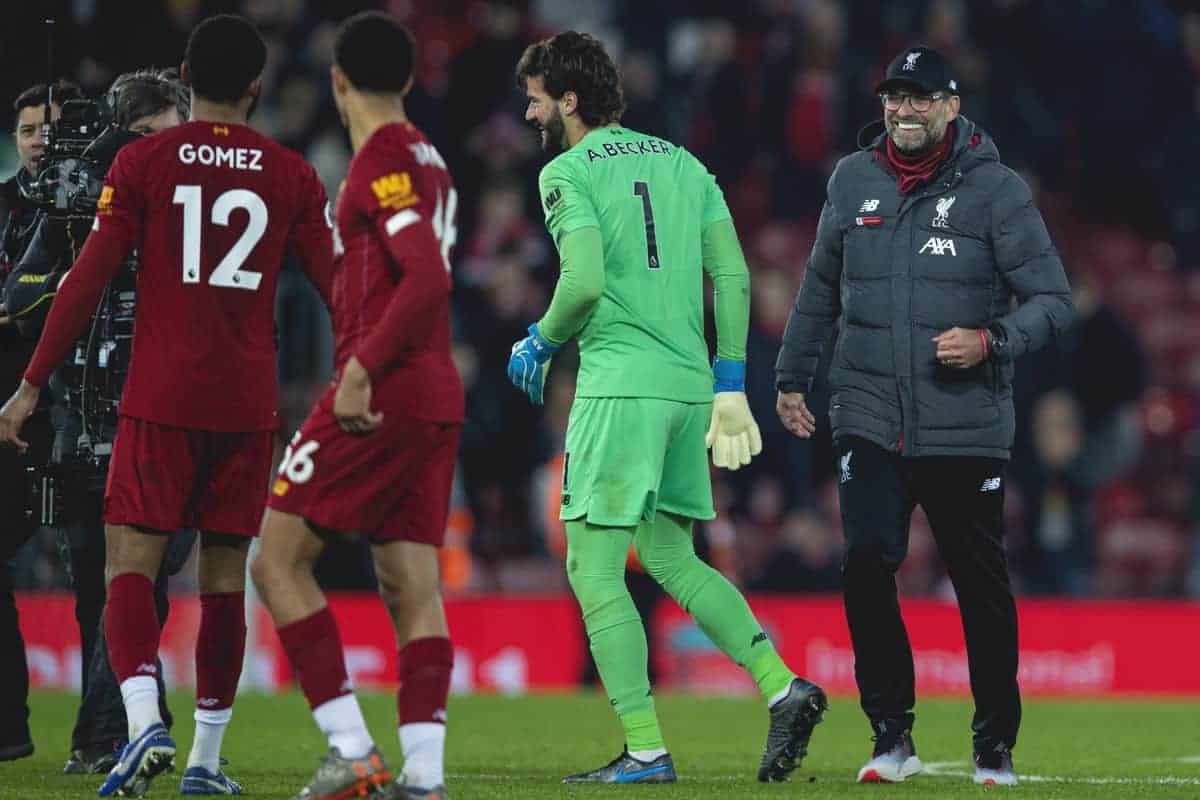 Liverpool felt the benefits of VAR as the tiresome debate continued in a 1-0 win over Wolves which extended their lead at the top of the Premier League.

In the buildup to the game, Klopp spoke of the need for “fresh legs” in order to sustain Liverpool’s table-topping form, suggesting he could make a similar number of alterations to the Merseyside derby.

But when the teamsheets were released, there was only one new face in the form of Adam Lallana, who took over from Naby Keita from the Boxing Day win at Leicester.

Interestingly, in the tightest turnarounds in festive fixtures, Klopp has made two, one, seven (the anomaly) and one changes in each of the past four seasons since he took over as Liverpool manager respectively, with this no departure.

Klopp confirmed ahead of kickoff that, were he fit, Xherdan Shaqiri would have started too, but there was no place for James Milner or Divock Origi.

Liverpool have dealt well with the fixture pileup this festive period, and while there could be more changes in the clash with Sheffield United on January 2, it seems as though the approach is to power through until the FA Cup third round.

Milner, Keita, Origi and perhaps Shaqiri could all come into the fold in the first game of 2020, while the likes of Adrian, Ki-Jana Hoever, Neco Williams, Curtis Jones, Harvey Elliott and Takumi Minamino may all be considered for the Merseyside derby.

It paid off as experience allowed the Reds to get an opener and grind the win out, and now the focus will be on recovery heading into the new year.

Among those to travel as part of the extended matchday squad was Joel Matip, who took a place behind the bench alongside the likes of Hoever, Caoimhin Kelleher and Pedro Chirivella.

It could be an indication that the No. 32 is closing in on a return, with Klopp providing an update on the fitness of his injured quartet on Saturday, indicating mid-January as a possible timeframe.

Matip was riding the crest of a wave prior to his knee problem, establishing himself as first-choice centre-back alongside Virgil van Dijk and signing a new five-year contract as a signal of his importance.

But in his and Dejan Lovren‘s absence, Joe Gomez has been able to reprise his partnership with the Dutchman and this has coincided with a run of clean sheets.

In his three starts in the league since returning, Liverpool are yet to concede a goal, while Gomez also featured in the shutout of Flamengo in the Club World Cup final.

He provides a slightly different option to Matip, with more pace on the recovery, and given the Cameroonian’s lengthy recovery period it is pleasing that Klopp has been able to call upon another top-class centre-back.

Gomez was near-flawless again on Sunday, and the shirt is now his to keep. 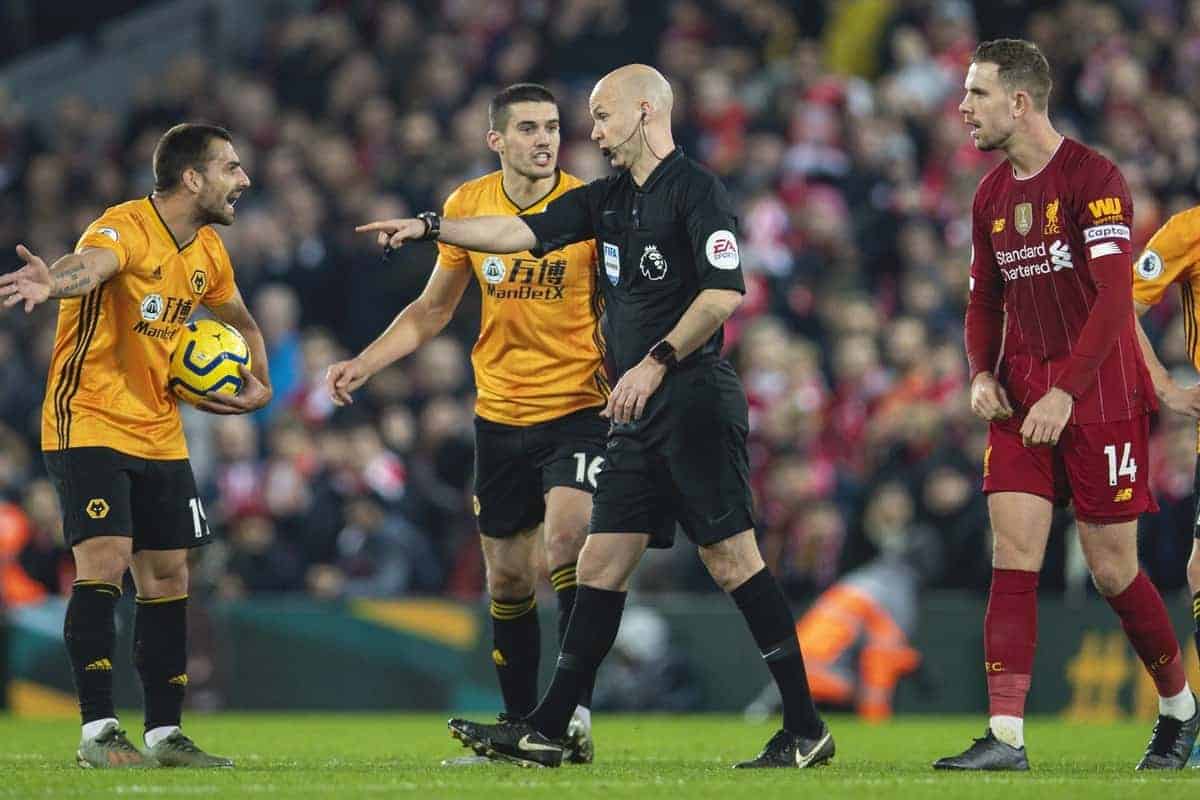 Fuck VAR, it’s not football anymore. The fans in the terraces are right.

In a festive period dominated by dismal officiating both on the pitch and at Stockley Park, VAR reigned again at Anfield.

Both goals in the first half were subject to lengthy checks, and fortunately for Liverpool it went in their favour.

Lallana was deemed to have played the ball legally in the buildup to Sadio Mane‘s opener and Jonny Otto deemed offside in the buildup to Neto’s ‘equaliser’, in two more examples of the pros and cons of the system.

The former made a mockery of referee Anthony Taylor’s initial decision to rule Mane’s goal out for handball, when it came off Lallana’s shoulder, while the latter saw Jonny ruled offside by a forearm and a big toe.

At half-time, the Wolves players and staff urged a handball check on Van Dijk prior to the opener, and unsurprisingly given the timing it was described as “inconclusive.”

Sure, it benefited Liverpool this time—unlike at Aston Villa last month, for example, when Roberto Firmino‘s armpit denied him a goal.

But VAR, its ruling, its implementation and, most importantly, the debate surrounding every game is tiresome and can’t be rid of sooner. 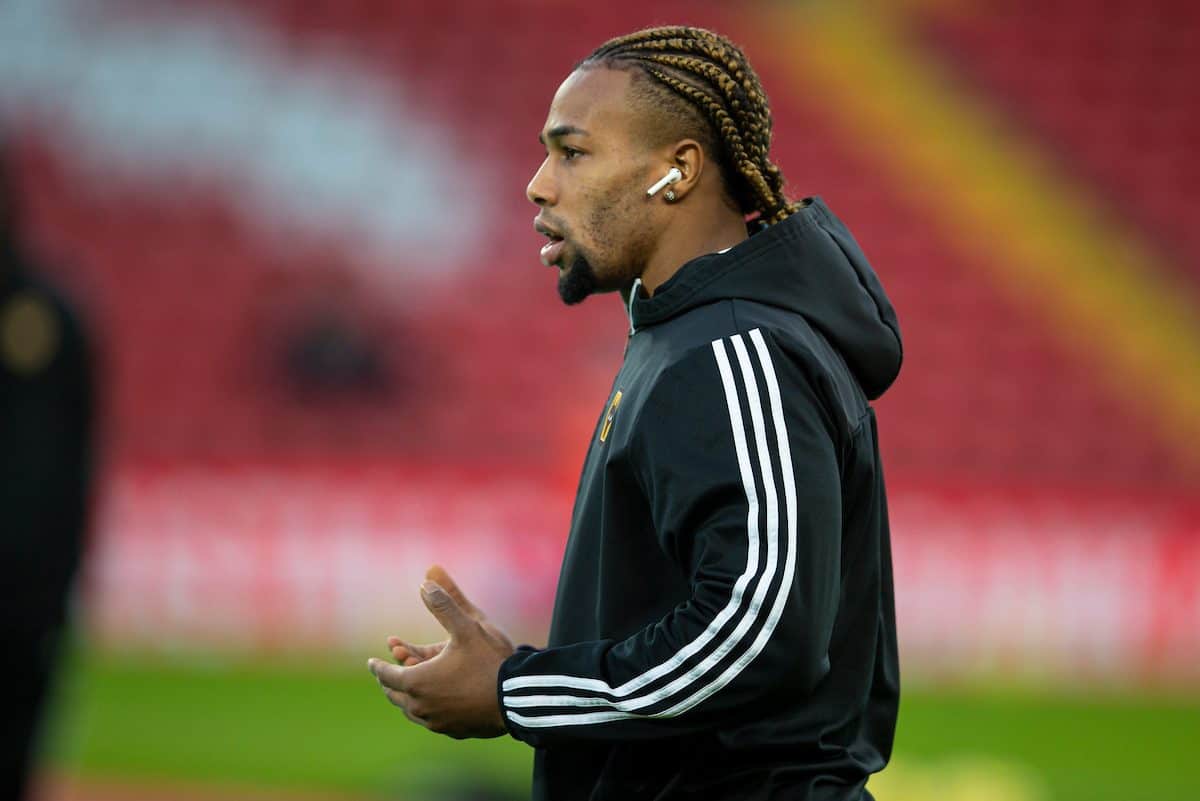 Klopp was full of praise for Adama Traore before the game—and before his match-winning performance against City—describing the winger as “exceptional” and revealing he has followed him since his breakthrough at Barcelona.

It will have come as a relief, therefore, that Nuno named the 23-year-old on the bench, as one of four changes prompted by a battle at Molineux less than 48 hours previous.

Adama came on as Wolves chased the game, and Nuno could be seen urging him and Jonny further forward whenever possible, looking to exploit Andy Robertson out wide.

Liverpool responded by slowing down the tempo, doubling up on Adama and executing tactical fouls to hamper the winger’s momentum, which almost led to a second goal for the hosts as he ran himself into trouble when heavily marked.

But he’s quick, strong, dynamic, industrious and adding genuine cutting edge to his game…could he be a Klopp player in the future?

Liverpool are now 19 games into the Premier League campaign, and are back with a 13-point lead over Leicester.

They are unbeaten in 50 league outings at Anfield, and are closing in on a full season’s worth of games without defeat in the English top flight, with their run currently standing at 36.

Klopp and his players will maintain their focus on the next game only, with no premature celebrations despite the gap between themselves as their challengers.

And this is the way it should be: Sheffield United next, and another big challenge for the Reds.