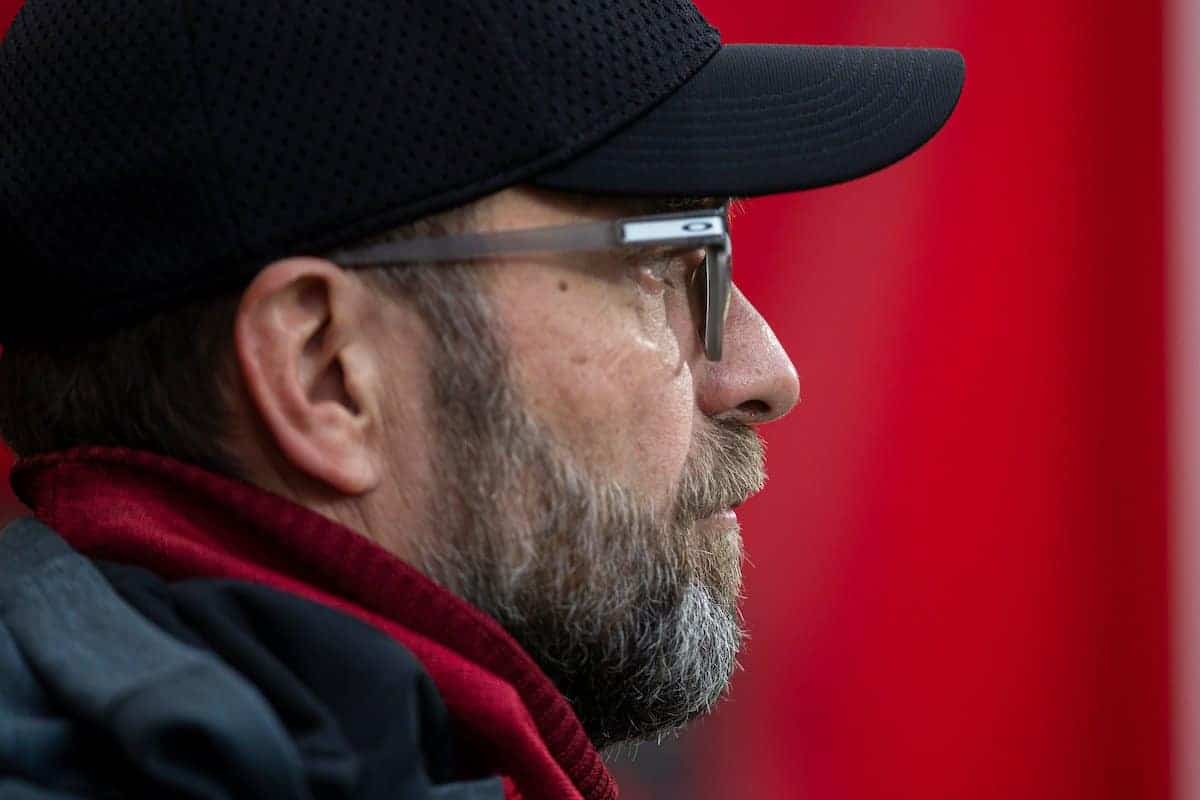 Jurgen Klopp insists he will be “sensible” with his selection for Sunday’s meeting with Everton, avoiding the “emotion” of the Merseyside derby.

The Reds host Carlo Ancelotti’s side just three days after a relentless 2-0 victory over Sheffield United, as they aim for progress in the FA Cup.

As with the League Cup, the FA Cup is seen as less of a priority by most this season, with Liverpool presiding over their most convincing title challenge in the history of the Premier League, along with defending their European Cup.

And after naming a full-strength side against the Blades, Klopp is expected to rotate heavily for the third round, having already confirmed Rhian Brewster will be involved.

Brewster’s inclusion hints at a youthful setup, and it is likely to be similar to the lineups seen against MK Dons and Arsenal in the League Cup, leaning on the experience of the likes of Adam Lallana and Divock Origi.

Klopp would not give much else away in his pre-match press conference, but said he would not be swayed by the fixture as he carefully manages his squad.

“That would not be sensible, and I have to be,” he said.

“The moment when I start getting emotional, and it’s not during the game, then all of us at Liverpool have a problem.

“We respect them, how you can imagine, we respect the competition, respect what the people want us to achieve—that’s a very important part of it.

“But I cannot do things because of the name of the opponent.”

Klopp has regularly highlighted the sparse nature of his squad in this winter period due to injury, with Fabinho, Joel Matip, Alex Oxlade-Chamberlain, Dejan Lovren, Xherdan Shaqiri and Naby Keita all ruled out for Sunday.

Takumi Minamino should debut, while Nat Phillips has made a brief return from his loan spell with Stuttgart to cover at the back, and along with Brewster, the likes of Neco Williams, Curtis Jones and Harvey Elliott could all feature.

Continuing to discuss the situation, Klopp emphasised that the recovery of his senior squad is of paramount importance, with those requiring a break set to be given one.

“For us it’s the day after the game, so it means we are still assessing the boys, everything, how they feel, how they reacted to the game last night,” he explained.

“It was an intense one, the boys played an incredible game; it was only possible because we invested a lot. We were dominant, ran a lot, so we have to see.

“I cannot make a lineup in this moment even if I wanted to, and that’s the thing. I have to make sensible decisions, obviously, about these things.

“Can I force anybody in that game and say ‘whatever happens, I don’t care: it’s the last game of the season’? It’s not.

“It’s always like this, if it was a league game against Everton or it would be another game, if it’s not the last game of the season you always have the same things to think about.

“That’s what I have to do still, I couldn’t finish that thinking process so far.

“So that’s it, we will see, what we try to do is bring in a team that is capable of doing the physical stuff in that game.”

Though Klopp is eager to avoid any emotion of his own in the buildup, he has once again stressed the importance of the Anfield crowd as Liverpool aim to avoid a replay later in the month.

“I heard a little bit about what Carlo said this morning, and they are obviously on fire—no surprise—and we have to make sure that we are ready for that,” he said.

“That’s why I said last night that we need the crowd, because that’s the only advantage we have really in this cup game.

“There’s no favourite, there’s nothing, there’s just two teams who play each other—in this case two teams from the same city, so it’s a derby, it’s a big one.

“The only advantage we have is it’s in our stadium, so let’s use that and give you everything, that’s the plan.”