The media were in awe of Liverpool’s ruthlessness in the 4-0 rout of Southampton and felt victory was inevitable despite the Saints’ brave approach.

Alex Oxlade-Chamberlain’s quick opener after the restart set the wheels in motion, before Jordan Henderson provided a cushion and Mohamed Salah finished the job with a brace.

It leaves Jurgen Klopp’s red machine needing 21 points from the last 39 available to secure the title and bring the coveted Premier League trophy to Anfield.

Here is all the key analysis from media on yet another victorious afternoon at Anfield.

The Mirror’s Mark Jones credited the Saints for having a go at the Reds, and said that even though it didn’t pay off, Southampton showed how Liverpool can at least be unsettled, if not beaten:

Premier League clubs are going to have plenty of time for analysis over the next couple of weeks as the winter break kicks in, and you can bet that most will be looking at how Southampton seemed to act as Liverpool’s Kryptonite in the first half here.

They might not have got the jackpot, but Saints should be lauded for their approach.

ESPN’s James Capps thought Southampton’s 4-4-2 set up unsettled Liverpool, but put the Reds’ struggles down to Klopp’s team causing their own problems through sloppy play:

Jurgen Klopp‘s side don’t normally come up against a traditional 4-4-2, and the combination of Shane Long and Danny Ings up front caused the home side’s defence all sorts of problems in the first half.

Meanwhile, the players further up the pitch did their defensive counterparts no favours at all with some sloppy passing that gifted the Saints a string of openings.

However, Richard Jolly, for the Independent, wrote how there was just a feeling of inevitability that the Reds would eventually come out on top, despite the pressure:

They have normalised winning and if Southampton’s first-half excellence presented problems, the predictable part was that Liverpool prevailed. They always do.

To come through a difficult first 45 minutes without conceding illustrated once again how Liverpool’s maturity and game management is now at the highest level, in the view of the Echo’s Ian Doyle:

And, no doubt given a reminder of their responsibilities by Jurgen Klopp and his coaching staff, Liverpool’s second-half showing underlined why they are sprinting towards the finish line, their game management having improved immeasurably during the past few years.

Standard Sport’s David Lynch attributed Liverpool’s ability to react, spurred by their desire to be the best, that inspired the Reds to almost ‘lash out’ in response to Saints’ efforts:

It is that ability to react almost angrily to minor setbacks such as being marginally second best for a half that saw the Reds end up as 4-0 winners.

Behind closed doors, Klopp’s side already know they are going to end the club’s 30-year wait for the championship, but they chase every win like a team that knows it can play its way into the record books.

The Liverpool Echo’s Paul Gorst felt all this showed exactly why the Reds are the world’s best team: 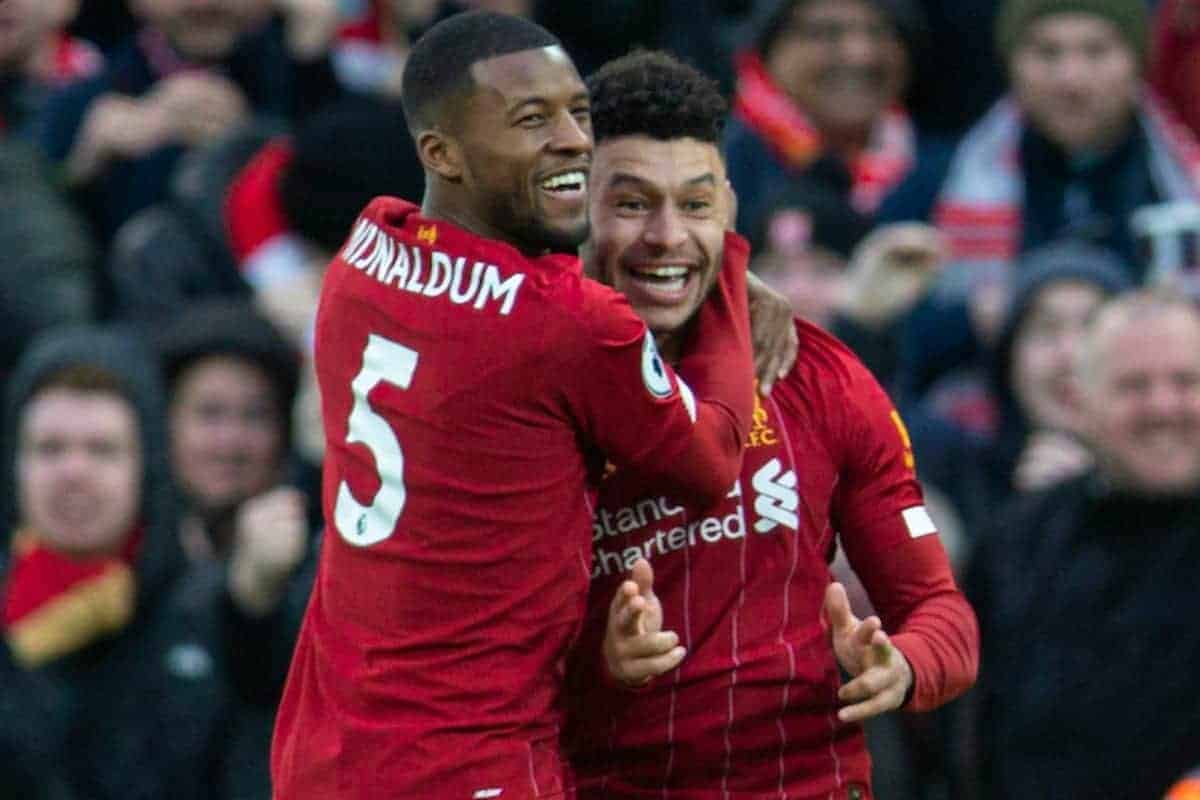 Capps was one of many journalists who were impressed by how the Reds were so unforgiving in finishing the match once ahead:

It could well have been a nervy second half after a poor showing in the opening 45 minutes, but after Oxlade-Chamberlain’s excellent opener, there was never any doubt as to who would be coming away from Anfield with the points.

Jolly assessed Liverpool’s “ruthlessness” as the key factor behind the Reds being so far ahead of everyone else this season:

Liverpool’s prowess is in part a result of their ability to win key moments.

Ruthlessness is a reason for the gargantuan gulf between them and the rest.

The Telegraph’s Sam Wallace was blown away by Liverpool’s hunger as he explained how the Reds were relentless until the final whistle, even when the three points were already in the bag:

This is a league leader that can well afford to drop points and yet not only do they refuse to yield on any terms, they are still coming at a broken opponent in the final minutes of the game.

However many goals they have scored, they play as if it is never enough.

The Mail’s Mark Draper was astonished by how the Reds were so clinical on the break, prompting him to question whether Klopp’s side are be the best counter-attacking team in the world:

For Liverpool do what they do so well. In fact, in the modern era of football you begin to wonder just how many teams have ever perfected the counter attack quite as ruthlessly as Liverpool? 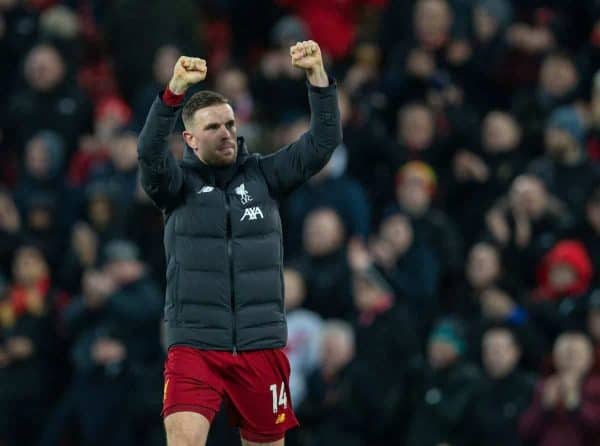 Doyle wrote as such, lauding how the captain inspired every teammate to raise their game and produce the second-half blitz:

The skipper had been the one player looking to inject tempo into the Reds’ humdrum effort before the break, too many of Klopp’s men lacking concentration and, dare it be said, real purpose. So when Liverpool finally started to fire, Henderson was inevitably at the fulcrum.

A lot of what the 29-year-old does can’t be quantified by raw numbers such as goals and assists, his work appreciated only by digging deeper into the statistics.

The BBC’s Emma Sanders wrote how Oxlade-Chamberlain is now finding his best form and credited his work in “controlling the midfield” with Henderson:

The scorer of that opener, Oxlade-Chamberlain, is starting to regain the form he demonstrated prior to picking up a serious knee injury while Henderson was magnificent again in controlling the midfield.

The Mirror’s Ian Parker also thought Oxlade-Chamberlain shone, and was particularly impressed with how he stepped up while facing the near impossible task of filling in for Sadio Mane:

And central to the Reds’ latest success, their 24th in 25 Premier League matches this term, was Alex Oxlade-Chamberlain.

Yet while nominally operating to the left of Roberto Firmino and Mohamed Salah, Oxlade-Chamberlain gave his own interpretation on how to play in Jurgen Klopp‘s front line. He may not be an out-and-out attacker like Sadio Mane or Origi but showed he can do a valuable job in Klopp’s front three.

Lynch assessed how Alisson was just as key to securing the victory as the goal-scorers, noting how the No.1 put in a “match-winning performance”:

Liverpool could have had no complaints had they gone in at half-time behind.

That they didn’t owed much to their remarkable goalkeeper, who seems to put in match-winning performances even in comfortable wins.

The Mail’s Dominic King loved Roberto Firmino’s display and analysed how the No.9’s selflessness is so vital and more than compensates for his lack of goals:

Firmino, of course, has been ticking his tally along on the road – most recently drilling in winning strikes at Tottenham and Wolves – but in some ways he is the forward for whom goals don’t matter. There is so much more to his game that is important for Liverpool and Southampton were the latest team to fall under his spell.

What he has done this season is knit Liverpool’s team together, the conduit for this brilliant squad to march relentlessly towards a first League title since 1990. Firmino’s brilliance is there for all to behold. No goals are needed to rubberstamp it.

Jones stated that Liverpool’s impending title win will confirm once and for all that Klopp’s team are the best Anfield has ever seen:

Twenty-two points clear and 100 points from the last 102 available is a simply remarkable series of events and results.

Liverpool will win the Premier League in the coming weeks and months (maybe less) and when they do then this side have every right to be regarded as the greatest of their illustrious history.

The Guardian’s Jonathan Wilson analysed how Klopp has turned the Reds into a winning machine, noting how the German’s work in further evolving the pressing game has been key to reaching new heights:

Klopp has taken those ideas to new heights, finding at Liverpool a club whose previous best days were based on a pressing game (albeit one quite different in tone from the modern version).

His version of pressing – dynamic and aggressive – is now the pre-eminent tactical mode, prompting evolution even in Pep Guardiola, whose press-and-possess football at Barcelona had laid the groundwork for this development.

Discussing chances of producing an invincible season, Gorst explained how the Reds will need to use the two remaining cup competitions to retain focus:

For complacency to truly not set in for the remainder of the season, though, you feel the runaway league leaders and future champions of England may need more achievements and accolades to chase down, domestically.

With the next destination of the league title now all but confirmed, what else is there to maintain the hunger, the desire and the drive?

And Gorst also thinks the huge lead in the Premier League should also allow for full focus on mounting a serious defence of the Champions League when it restarts:

Liverpool fans will simply settle for a league crowning, whatever happens, though.

Of course, such chatter ignores the defence of the Champions League that resumes on the other side of this mid-season break in Madrid and it will be fascinating to see how Klopp juggles his options for the remainder of this month with Atletico laying in wait.