Did it cross the line, or didn’t it? It’s a question largely on the lips of Chelsea fans who claim the latter but for Liverpool, it proved defining in their incredible European Cup triumph.

Jose Mourinho’s cries still echo around the footballing world and Luis Garcia continues a yearly reminder of the moment which set the club’s fifth European crown in motion.

The scene was set. The second leg awaited at Anfield on May 3, 2005 in the Champions League semi-final tie which was precariously placed following a 0-0 draw at Stamford Bridge a week earlier.

Liverpool and Chelsea’s modern-day rivalry was largely born out of the events which transpired in the semi-final clash, with a further 20 meetings in domestic and European action following within the next four years.

“I think the pressure is on Liverpool. We’ll go back to London as heroes independent of the result,” was how Mourinho assessed the situation prior to kickoff. 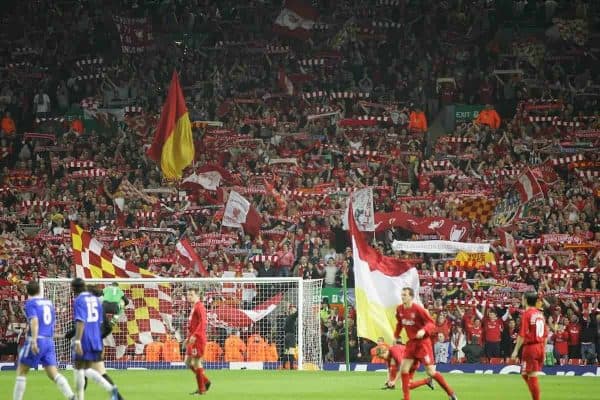 Anfield, however, was having none of it. Long before the game was due to start, Reds were out in force and created a wall of noise and an atmosphere still regarded as one of the best ever for those who were lucky enough to witness the events which transpired.

A fierce, feral and combative home crowd met Chelsea and John Terry later penned in his autobiography: “I walked out into that cauldron and heard that singing and saw that passion. The hairs on my arms were standing up. To see a spectacle like that is inspiring to anyone.”

It was the first European Cup semi-final at Anfield since 1984/85, making it an emotional outing for many.

And in just the fourth-minute, Garcia had edged Rafa Benitez’s team into the lead having poked the ball goal-wards after latching onto a loose ball.

Liverpool’s No. 10 pounced after Milan Baros was wiped out by Petr Cech, William Gallas cleared the ball but Garcia had already wheeled around to the Kop in celebration.

The referee pointed to the centre-circle and Liverpool were 1-0 up in a flash. And while Mourinho would go on to protest this fact in the years since, had the goal not been given a penalty and red card to Cech would have. 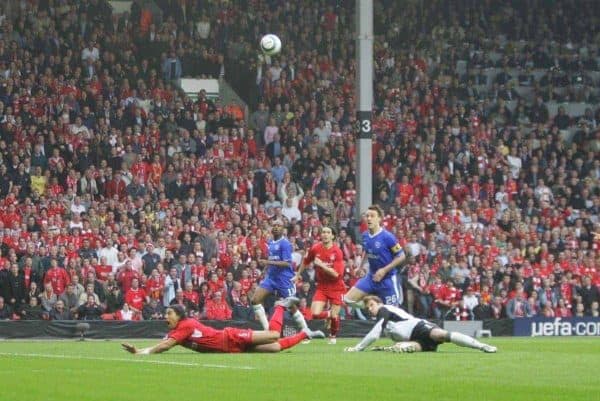 A man and in all likelihood a goal down would not have read as nice for the Chelsea boss, surely.

Nevertheless, the roof well and truly came off Anfield as Garcia put Liverpool one foot into the Champions League final, but an agonising 90 minutes would follow for Garcia and Co.

“For me it was and the referee gave it so…and I saw the linesman running back into position and just started screaming.

It was incredible. They had a machine to measure how loud the Kop was that night and I think when the goal went in it was one of the highest decibel readings ever in sport.

I don’t remember much about the game. But those last 20 minutes I watched from the bench and was suffering.”

The visitors would then take ownership of the ball but failed to find the ruthless edge needed to clinch the all-important away goal for much of the game.

The final 30 minutes dragged on for eternity as the Reds looked to make sure of the result, and when the fourth official instructed a further six minutes of stoppage time it sent shockwaves and nerves to flood all those of the Liverpool persuasion. 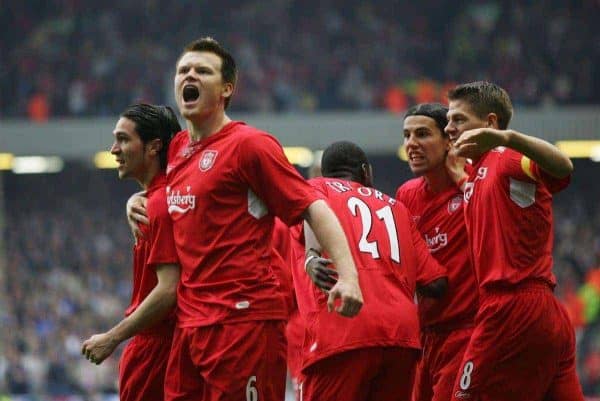 A barrage of Chelsea pressure arrived and bodies were thrown in the way at every opportunity, then the moment came and went for the Blues.

With over 95 minutes gone, Eidur Gudjohnsen was handed Chelsea’ best chance of the game after Jerzy Dudek emerged from his goal-line to punch the ball clear but failed, only to see his volleyed effort fly across the goal face.

That was all she wrote. And after 20 years without an appearance in a European Cup final, the wait was finally over.

It would prove to be the preface of a night like no other, where the fifth European Cup would safely return to Liverpool in the only way they know how: dramatically.