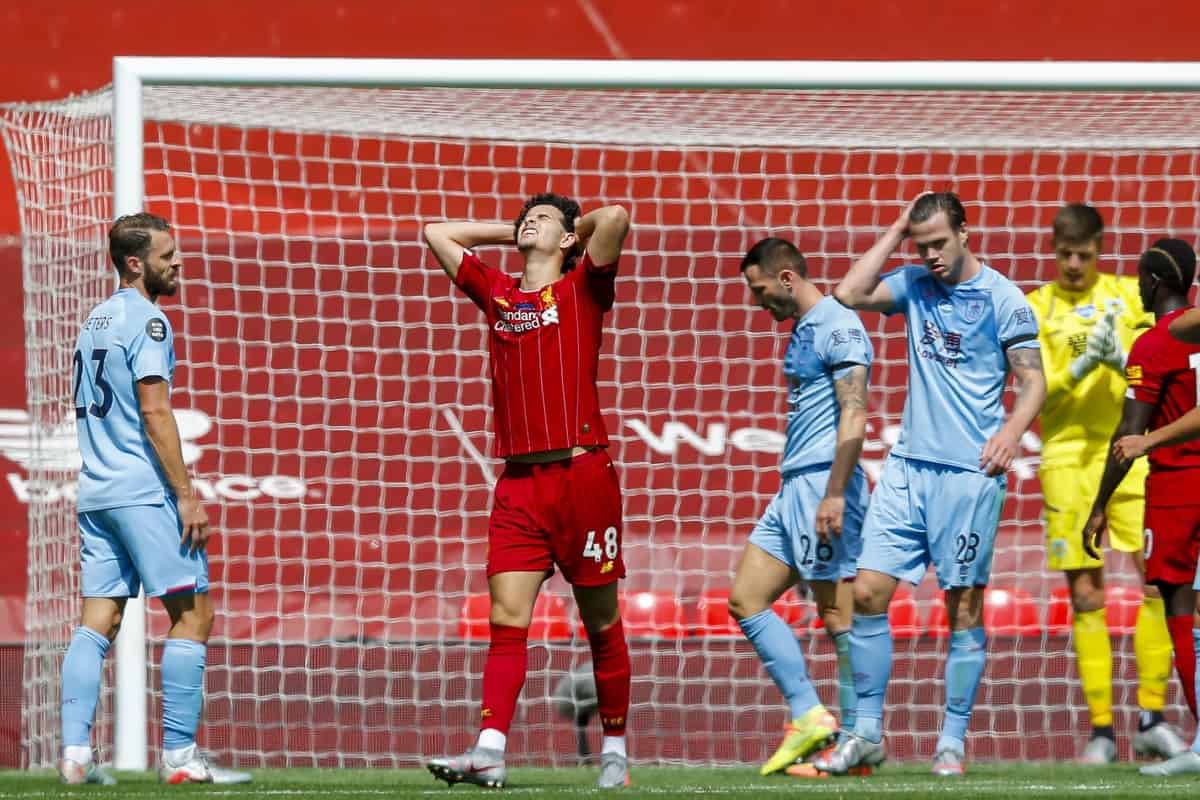 Liverpool’s perfect Premier League record at Anfield came to an end on Saturday, with Burnley‘s smash-and-grab approach earning a 1-1 draw against the champions.

The beauty of Liverpool’s early title coronation is the ability to rotate throughout the final weeks of the season, and particularly give opportunities to deserving young players—on Saturday, that meant starts for Neco Williams and Curtis Jones.

They were complemented by experience, of course, and with Nick Pope vying with Alisson for the Golden Glove award, he was forced into a brilliant save to keep out Mohamed Salah from close range in the 18th minute.

Salah’s determination to win a third consecutive Golden Boot was clear, and Pope was required to keep him out again—before one of the most unlikely of scorers broke the deadlock.

That was, of course, Andy Robertson, who stole in from the right-hand side of the box to steer an unbelievable header beyond Pope and into the far top corner for 1-0.

Some really sloppy passing across the back gave Burnley some half-chances towards the end of the half, but they were unable to capitalise and the first 45 ended with another fine stop from Pope to keep out Sadio Mane.

Fabinho controlled the game from the No. 6, though despite their dominance chances came at a premium for the Reds.

Salah somehow blasted a free effort high over the bar, grasping at his openings in his bid to end the season as top scorer, while Roberto Firmino‘s Anfield drought continued for another game.

At the other end, having been feeding off scraps throughout up against Joe Gomez and Virgil van Dijk, a simple long ball, knock-down and finish gave Burnley their equaliser through Jay Rodriguez; no clean sheet for either ‘keeper.

It then became a game with one side desperate to win and aid their chances of breaking the all-time points record and another hoping to snatch the points, to extend a run of four games unbeaten and consolidate their place in the top half.

Substitute Johann Berg Gudmundsson rattled the crossbar amid a series of corners that saw rookie referee David Coote persistently overlook fouls on Alisson, which was the closest either side came to a winner as the game ended 1-1.

The result, of course, means Liverpool’s record of winning every league game at Anfield this season comes to an end, and with eight points needed from their final three points, hopes of beating Man City‘s 100-point record are now much slimmer.