Jurgen Klopp has all but closed the door on Liverpool’s incoming transfer dealings this summer, despite murmurings surrounding the search for a new centre-back.

After Dejan Lovren departed at the end of last season, the Reds were left with three specialist senior centre-back options, Fabinho and a handful of youngsters to call upon.

But with Joe Gomez and Joel Matip having experienced a number of stints out of the side through injury and a congested campaign ahead, an extra experienced body at the back was on the wishlist for many.

This was revised after the aforementioned duo succumbed to respective fitness concerns just two games into the 2020/21 season, which saw Fabinho drop into the position at Chelsea and Lincoln.

The likes of Ben White, Aissa Mandi and Ozan Kabak had all been linked throughout the summer, but Liverpool’s window is set to close with Kostas Tsimikas, Thiago and Diogo Jota as the only newcomers.

“I don’t expect a lot [in the rest of the window], to be honest,” Klopp told reporters.

“The centre-half position you think you are well covered, we have three absolutely top, top, top-class centre-halves, young players in behind and Fabinho at the back end. 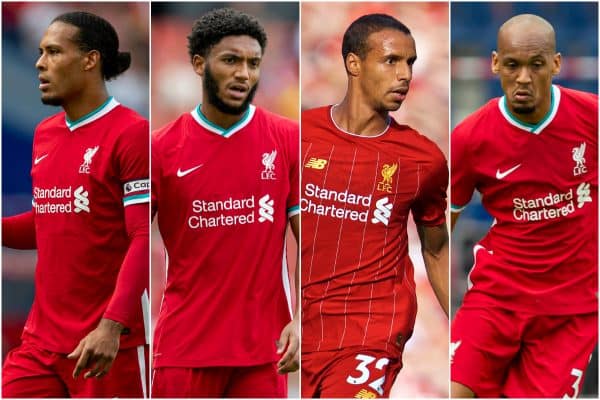 “And all of a sudden three players are out for a few days, that’s not nice. But we cannot sort that in the transfer market, to be honest, because that’s just not possible.

“We will not even try if nothing more serious happens, so I hope we don’t have to try that. But if the situation stays like it is in the moment then no, nothing happens for all the rest.

“I think we are in quite a good place now squad wise and what will happen on the outgoing side I have no idea in the moment, we will see.”

Liverpool are to be boosted by the return of Gomez for Arsenal‘s visit on Monday, a timely recovery with Thiago cast under doubt with an unknown injury – meaning Fabinho will move out of defence and back into the midfield.

Klopp has also placed his belief in emerging young centre-backs Billy Koumetio and Rhys Williams, one of whom could find themselves on the bench at Anfield for the Gunners’ visit before featuring in the League Cup days later.