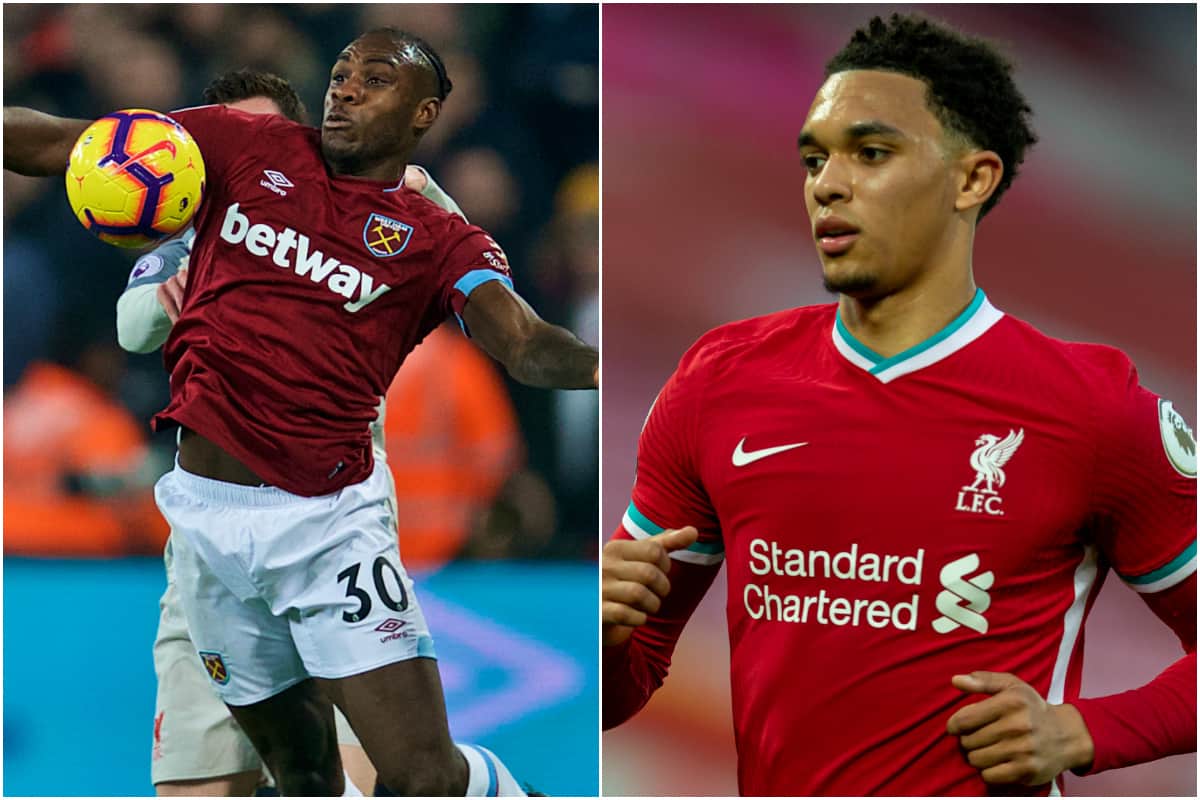 West Ham fans are eyeing a win at Liverpool on Saturday, with the Hammers heading to Anfield in ominous form, but are still wary of the threat of Trent Alexander-Arnold.

Jurgen Klopp‘s men have sealed three wins on the bounce since the draw at Everton, beating Ajax, Sheffield United and Mitdjylland.

The Reds host West Ham this weekend, in what could arguably be one of their toughest games of the season to date.

David Moyes’ side are in impressive form, drawing with both Tottenham and Man City recently, as well as winning 3-0 at Leicester.

Ahead of the game, we spoke to Geo from Hammers Chat (@hammers_chat) to get his thoughts on West Ham‘s form and where Saturday’s match could be won and lost.

Barring Newcastle on the opening day, we have not only had good results, but played some very nice football too.

There was a possibility we would have gone to Anfield without a win to our name at this point, given our tough start on paper, but we are turning up with confidence instead.

Is Moyes still the man to take the Hammers forward?

I can’t use the word ‘still’ as I have never been a fan of him.

I thought he did well, at best, to keep us up last season, considering our squad and the fact we weren’t in the bottom three when he took over.

This season, however, I have been very impressed thus far and find myself somewhat warming to him.

I do remain a little apprehensive, though, as there are a few players that I think are key to his ‘new’ system and without one of them, I am unsure as to what he is going to do.

It looks likely that we will be missing one on Saturday.

Who have been your three players to watch so far? 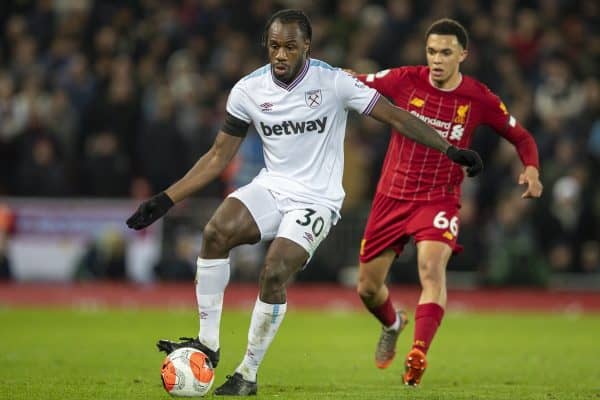 Michail Antonio was in incredible form post-lockdown and it has continued this season. He is not a natural striker but is finishing like one, and he was unlucky not to be called up for England.

Antonio’s power and pace have always been there, but his technique has improved a lot.

Arthur Masuaku isn’t good at left-back, but in this wing-back role he is superb.

He can carry the ball with his pace and dribbling, is a skilful player and is capable of producing a decent cross now and again.

Masuaku is our most improved player and has a good understanding with Aaron Cresswell, who plays behind him as a left-sided centre-back.

Declan Rice had a quiet start to the season, but I thought he was outstanding a few weeks ago in the win over Wolves and continues to make the difficult look easy.

I’ve not seen someone win possession in tackles so consistently as he does in a long time.

Rice is playing a slightly different role this season, becoming more of a box-to-box midfielder, but it is suiting him well.

What is the aim moving forward? 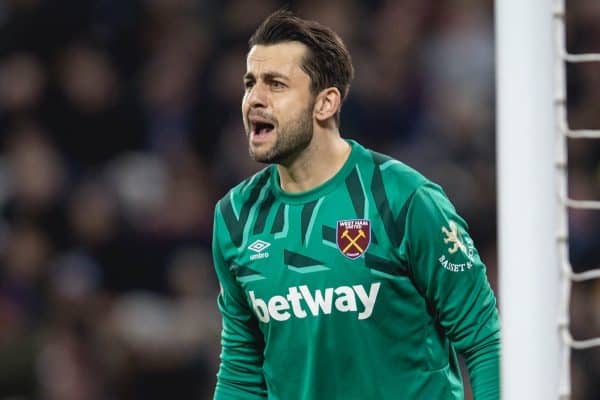 I will still stay safety, and by that I mean no relegation battle.

A top-half finish would be a good return if we continue to play the same style of football, as the entertainment value is there currently.

If we can execute plan B, without Antonio, then I will be optimistic.

I would like us to be reasonably comfortable for when the FA Cup comes around, and see us go far in that – I am a bit of a romantic when it comes to the cup.

Give me the trophy and 17th instead of a sixth-placed finish any day.

As for Liverpool, will they retain their title?

It will be tough without Virgil van Djik, won’t it?

I think this season feels like 2015/16 again – maybe not to the extent that someone like Leicester win the title again, but I just get an inkling that yourselves and Man City have lost a bit of the fear factor.

More sides will have a pop at each of you compared to last season and that will set us up for a good campaign.

Saying that, the sides that perhaps should challenge – Man United, Chelsea, etc. – look poor so far.

But to answer your question, I am not expecting you to win the league because Van Dijk is worth points.

Looking ahead to Saturday’s game, who do you fear?

Does everyone say Mane or Salah for this? They must do? I personally think your full-backs will cause us trouble.

The way we play means our two ‘attacking midfielders’ have to play quite central when going forward, but also chase the full-backs when defending, which is not an easy task.

Tottenham took advantage of it in the first half for their third goal and I worry that Pablo Fornals could struggle running about after Trent Alexander-Arnold.

He works hard but is just a bit too slow, unfortunately.

I certainly see Aaron Cresswell vs. Mohamed Salah as a key battle.

Cresswell is not a natural centre-back, but plays better in this role than he does as a conventional left-back.

I feared Riyad Mahrez would cause him problems last week but he didn’t really – I don’t think he has been tested enough yet and I think Salah should change that.

If Antonio is fit enough then I can’t wait to see him against your defence. I do think he will cause you problems.

I fancy us and I am not sure why.

I have not been convinced by what I’ve seen from Liverpool so far this season and thought better finishing from Sheffield United last weekend could have led to them winning.

We are playing some decent stuff and have a bit of swagger about us.

If Antonio is injured then I will rescind my prediction, but if we are unchanged then 1-0 to the Hammers.