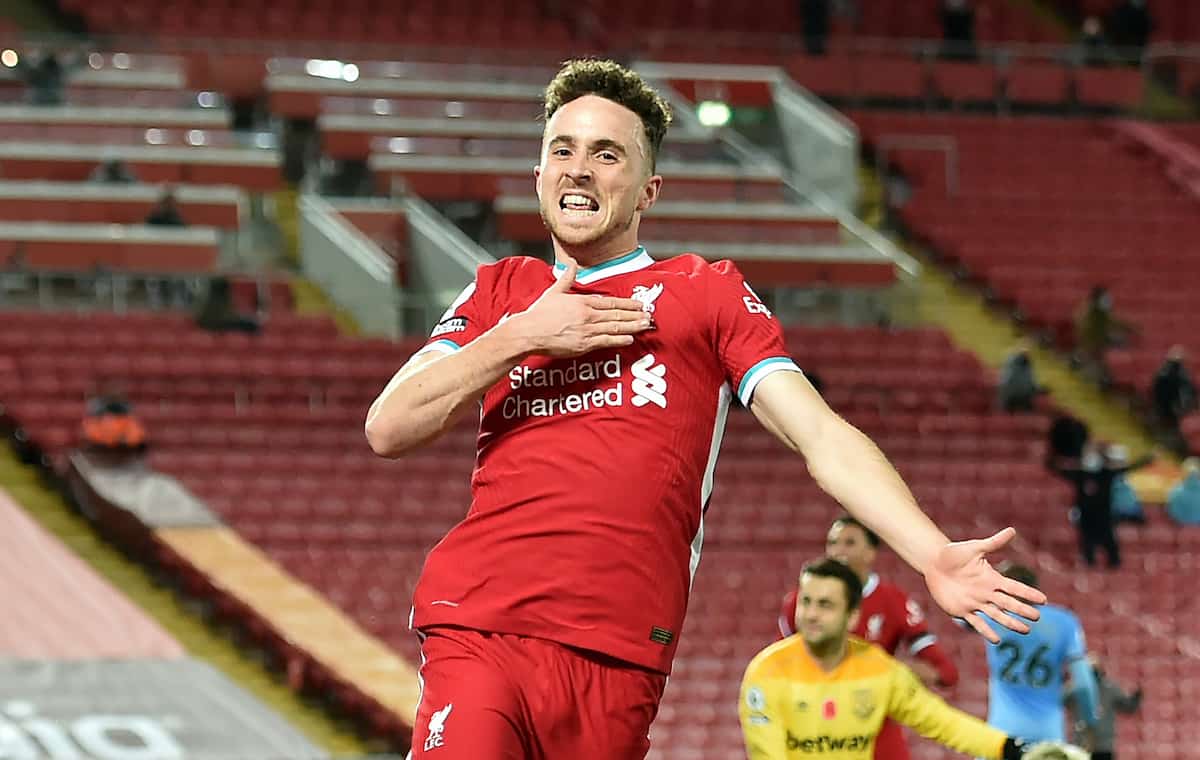 Diogo Jota can etch his name alongside Mohamed Salah‘s should he find the net against Man City today, in what would be his fifth successive game with a goal for Liverpool.

Jota, should he score, will become the first Liverpool player to score in a fifth game in a row since Mo Salah in March 2018, who did so in a sequence of seven.

The last Liverpool player to score a hat-trick in back to back games was Jack Balmer in November 1946 – (he did so in three games in a row). Jota could match that feat today.

In the Premier League, Liverpool have won 20 meetings and City 10, while at City the Reds have won four with 10 draws and nine defeats.

At the Etihad Liverpool have won three with six draws and eight defeats, winning one of the last 11 and taking six points out of a possible 33.

The Reds have not lost four in a row at City since 1937, and they have drawn 10 times at City in the Premier League with only their fixtures at Arsenal (11) and Everton (12) producing more.

They have conceded 13 times at City in the league under Jurgen Klopp – more than against any team under him on the road.

An Early Buffer On the Line

Liverpool have lost their last three games played on this date.

A victory in this game would see Liverpool extend their lead over City to eight points, though City would have a game in hand.

Going into this round of fixtures only West Brom (10) have conceded more top-flight away goals than Liverpool (9).

In the five games Liverpool have played since Virgil van Dijk’s injury they have conceded only once from open play and twice in total.

Joe Gomez could play the 100th league game of his career, while James Milner could make his 550th career league appearance.

City have won three and drawn one of their four home league games against Liverpool under Pep Guardiola.

The City boss has a record of four wins in the last 12 clashes with Jurgen Klopp in all competitions (three draws and five defeats), with 11 coming against Liverpool.

And Klopp has beaten Guardiola eight times as a manager.

Hosts Under the Microscope

They have scored in 40 of the last 41 home league fixtures – only Wolves in October 2019 managed a clean sheet.

Last season they won only four of the 10 games against ‘big-six’ teams, earning 13 points, scoring 17 and conceding 14. They have beaten Arsenal 1-0 this season.

When losing 5-2 at home to Leicester earlier in the season it was the first time in 686 games a Guardiola side had conceded five in a game. It was also the first time in 438 games City had shipped five at the Etihad.

City are looking to record back-to-back league wins for the first time this season.

They have scored nine goals in their opening six league games – their lowest tally for 10 years when they scored seven in the first half a dozen fixtures of 2010-11.

In the last four league outings, they have conceded only twice and they have kept three clean sheets in a row in league and cup for the first time September 2019.