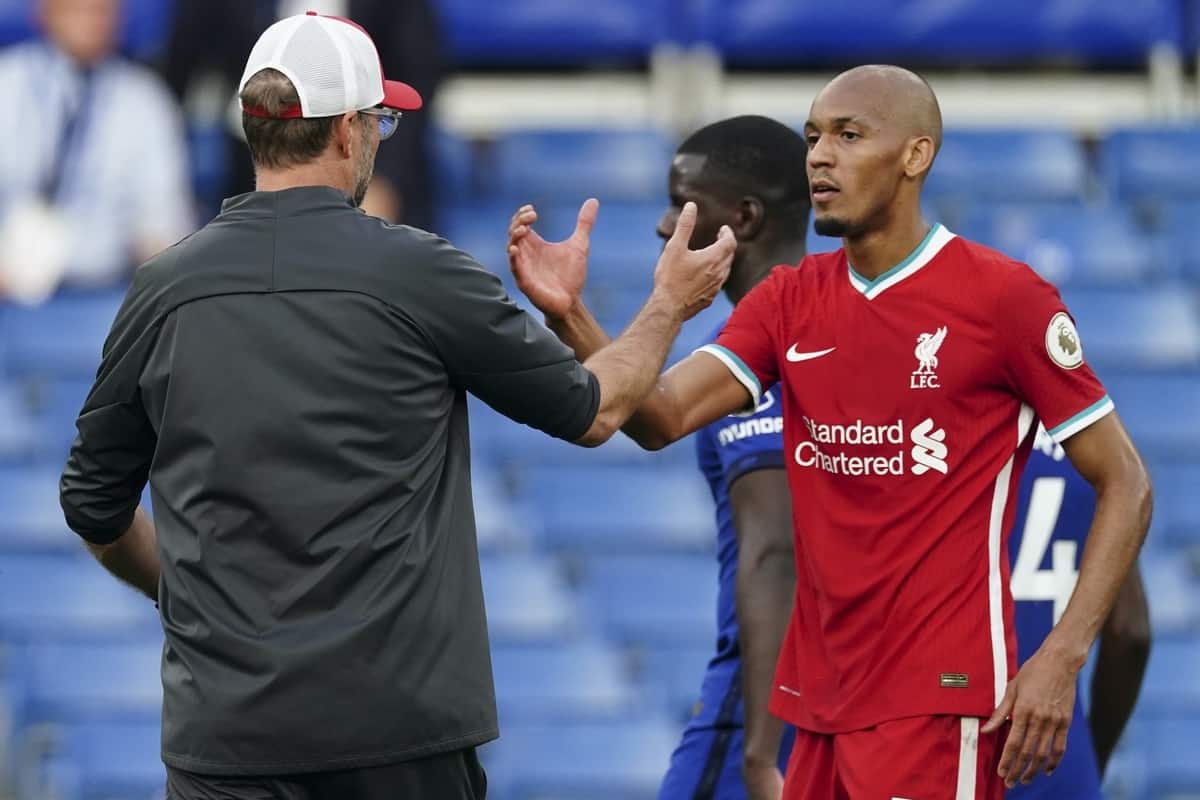 Jurgen Klopp will again patch together a Liverpool side as Leicester visit Anfield on Sunday, with the return of Fabinho the key talking point as he names his selection.

The Reds have been stricken with injuries throughout the campaign so far, and now await the comeback of a number of key players ahead of the festive period.

On a positive note, this month brought the final international break of the year, and though a number of absences stemmed from the past fortnight, Klopp can now look to a prolonged run with his side at Kirkby.

Liverpool are now settled into their new training ground, with Fabinho among the first to report for duty as he recovers from a hamstring injury.

The Brazilian could return to the starting lineup against Leicester, as Klopp faces a number of big calls with his XI.

Fabinho back, Hendo out

Speaking ahead of the clash, Klopp revealed that Fabinho had returned to full team training in the days prior, which suggests he will be fit to feature.

Whether that comes as a starter or not depends on how his body reacts to the increased workload, but the manager did not seem too hesitant as he discussed the fitness of his No. 3.

Klopp did, however, rule out Jordan Henderson, while Thiago is unlikely to be available with there a reluctance to rush him back from a knee problem.

Trent Alexander-Arnold is another recent casualty and will be missing, while Virgil van Dijk and Joe Gomez are long-term absentees, and despite Alex Oxlade-Chamberlain stepping up his recovery he will not be available.

Despite the club’s best efforts, Mohamed Salah is also out having contracted COVID-19 while in Egypt.

Fortunately, the likes of Andy Robertson, Neco Williams, Rhys Williams and Curtis Jones have all shaken off knocks.

Provided Fabinho is ready, and it seems likely, Klopp has a number of options available to him as he prepares to take on a side who headed into the weekend top of the Premier League.

If Klopp opts for the former in both cases, he could spread the experience out across all areas of the pitch while fielding a strong enough XI to put Leicester to the sword.

Alisson is a guaranteed starter at the back, and given he has been afforded a fortnight to prepare at Kirkby, James Milner is the most likely candidate to step in for Alexander-Arnold at right-back.

With Fabinho in the No. 6 role, Nat Phillips could be given another start alongside Joel Matip at centre-back, with Andy Robertson at left-back and Gini Wijnaldum and Naby Keita joining the Brazilian in a three-man midfield.

Salah’s absence is at least soothed by the form of Diogo Jota, and he can support Sadio Mane and Roberto Firmino in the front three. 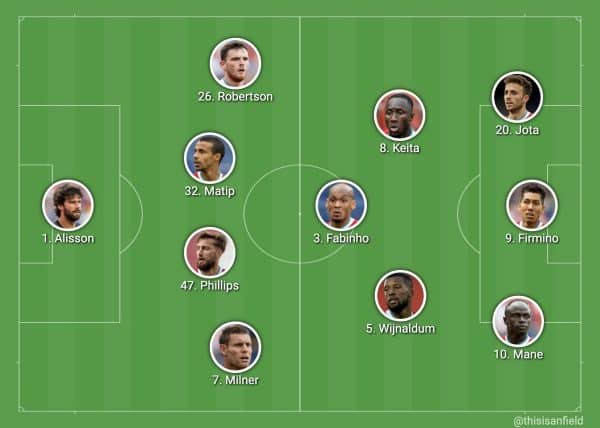 With Fabinho perhaps best used at centre-back, however, Klopp could retain his new system, which resembles anything between a 4-4-2, 4-2-3-1 or 4-2-4 at different stages.

The only change to the aforementioned XI would therefore come in attack, with Xherdan Shaqiri a possible wildcard on the right flank after a series of bright performances of late.

Shaqiri could also be deployed in the No. 10 role, with Jota and Mane on the flanks and Firmino up front, which provides an interesting option that would reflect his approach with the Swiss national team.

A back four of Milner, Fabinho, Matip and Robertson provides a blend of experience and quality, with Fabinho likely tasked with keeping Jamie Vardy quiet, as he did with Timo Werner when deployed at centre-back against Chelsea. 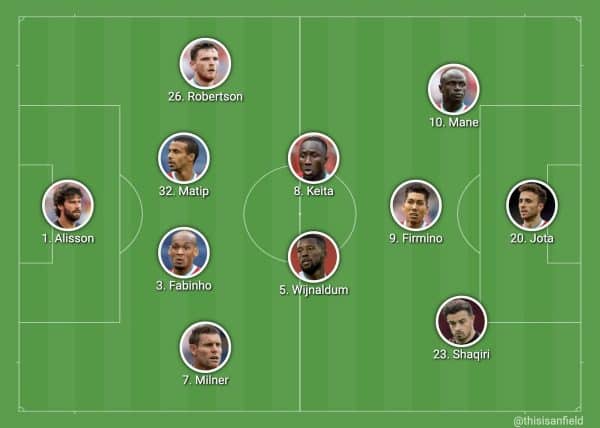 Of course, Klopp could still play it safe with Fabinho‘s fitness and turn to his youth ranks, with Williams and Jones also options in defence and midfield.

But given his availability over the international break, in all likelihood the 27-year-old will be fit to start, which is a major boost for Liverpool as they look for a big win in the league.