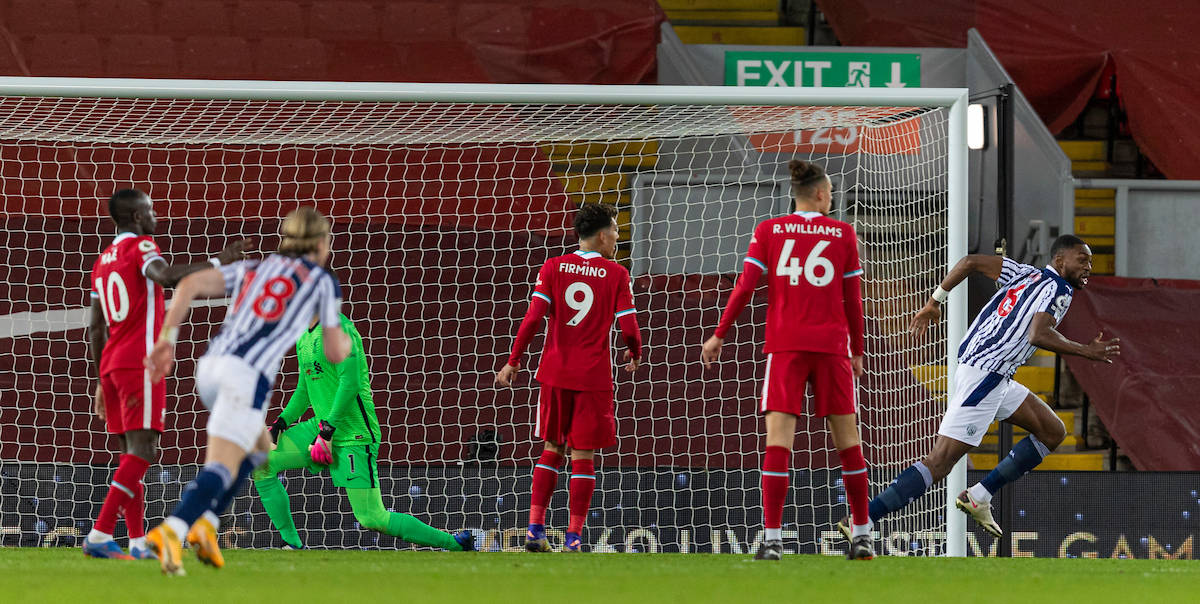 There is no use criticising Allardyceball as Liverpool proved their own worst enemy as momentum continues to come in peaks and troughs.

That’s the thing when it comes to dreaming. There is always the risk of a rude awakening. It was pantomime season at Anfield on Sunday, and it was Sam Allardyce in the role of the villain.

We’ll always be ridiculed for ‘that’ celebration after a 2-2 draw at home to West Brom during the early days of Jurgen Klopp’s reign, regardless of where he’s since taken us. It’s just the way rival supporters are left to take solace from the scraps that fall from the big table of success. We’ve been there ourselves, and one day we’ll be there again.

As a football fan, you take your comfort wherever you can find it.

When it comes to the Premier League, only one team can win it and once you take out the half dozen or so clubs that are distracted by the relegation battle and another half dozen that are content with the sanctuary of midtable, only envy consumes those who were left wanting in the previous season’s title race.

Sunday’s result will have lifted many a Christmas.

Allardyce has been one of the most impressive footballing curmudgeons over the last couple of decades. He’s a man who marries textbook pragmatism with supreme confidence before mixing it with a scientific approach.

Throw in a pint of wine and his self-sabotaging of his one-game spell in charge of the England national team, plus his statement that he was good enough to manage Real Madrid, and there is something quite compelling about him. Allardyce even upset Everton supporters in dragging them away from a potential relegation battle.

Still to this day Allardyce remains the last opposing manager to pick off a Premier League win at Anfield when at the helm of Crystal Palace. That was over three and a half years ago now, during which he didn’t just preside at Goodison but also took a year and a half out of the game.

Top of the table at Christmas again, but struggling to find a consistent stride. Three points garnered from a possible nine in recent games against Brighton, Fulham and West Brom doesn’t speak of the Liverpool we have come to know, while our away results across the broader spectrum this season so far take on a midtable hue.

Set against this, there was the seven we put past Crystal Palace, the verve with which we defeated a talented Wolves and the magnificent last gasp victory over Tottenham. This, all part of a league campaign in which we’ve lost just once, from a game where we conceded seven, a huge contributory factor to the fact that we’ve shipped ten more goals than both Everton and Manchester United.

Thus, while two points dropped at home to a team in the bottom three is an anomaly, an event that none of Liverpool’s greatest teams of the past were immune to, it speaks of a carelessness that we can’t afford to be participating in.

While we can trust most teams behind us to take points off each other and suffer their own aberrations at home to opponents that are meant to know better, there sits Manchester City six points adrift, with a game in hand.

On Sunday, the first half must have been as close as we’ll ever experience to how Celtic supporters watch the vast majority of their home games. Total and utter encampment in the opposition half.

Derided for a 4-6-0 formation, Allardyce’s team admirably restricted Liverpool’s 0-5-5 formation to one goal, however. A Sadio Mane goal of great beauty.

As half time arrived, I was left with that nagging sense of déjà vu. Allardyce has a knack of defending a narrow deficit, coiling his team into a tight defensive spring from which they pounce for an equaliser from a set-piece.

And so, it came to pass. The second half was an entirely different game. The corner from which West Brom’s goal came was unnecessarily conceded. Even the way the ball hit the post and went over the line, via a goading degree of backspin, was given the added ingredient of Sammy Lee within arms outstretched in celebration mode.

By the time Semi Ajayi’s goal came, it wasn’t as if the invite hadn’t already been handed out. Karlan Grant had been denied by a fine save by Alisson.

In a game of immense frustration, Joel Matip suffered another injury, and Klopp won himself a yellow card.

On one hand, you aim to shake this result off and simply ‘move on’, while on the other you must assess the bigger picture. We’ve come this far this season despite the catalogue of injuries we’ve sustained yet the side effects are such that our momentum is only hitting the peaks in fits and starts.

With regards to Sunday, it’s the easy thing to slag off Allardyceball, but there is no wrong approach to football. You set out your stall for expansive football or you pragmatically cut your cloth accordingly.

Allardyce concentrates on the strengths of his teams, he floods the space his opponents choose to occupy, his players guard the ground rather than follow the ball and the player. There is a certain art form to playing without the ball; it’s all about smothering the space.

One more game until we bid farewell to the tumultuous year that has been 2020 and Steve Bruce will aim to replicate the Allardyce template with Newcastle United on Wednesday night.

We overwhelmed pragmatism against Crystal Palace yet were frustrated by it against West Brom. Which version will we opt for at St James’ Park though?