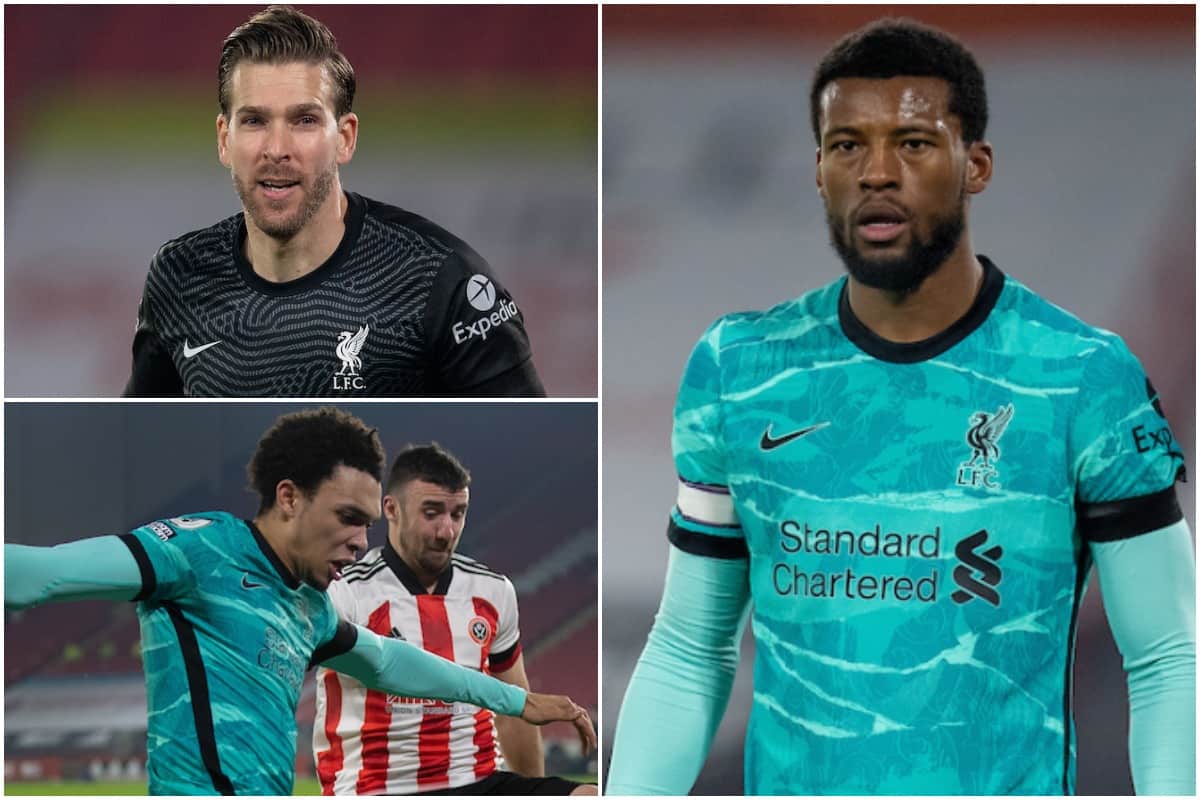 Relief and renewed optimism were the prevailing emotions as Liverpool returned to winning ways against Sheffield United, with the manner of performance as much as the result seeming to offer hope.

There was rarely any doubt that three points would be earned against the Blades in a dominant performance, with only the home goalkeeper standing between Jurgen Klopp‘s side and a huge scoreline in truth.

Ultimately, 2-0 proved a bit of a mood-lifter at both ends of the pitch: not close enough to be termed ‘edging’ the win, but with enough defensive work being done to show fight and determination remains intact.

Captain on the day Gini Wijnaldum told the club website that while initial missed chances can be frustrating, keeping the positive approach is the only way forward – and the clean sheet was just as important.

“In the situation we are in right now you just hope that every chance you create is a goal but, unfortunately, it doesn’t work like that in football, so we knew that if we create chances you can miss,” he said.

“You are disappointed when the first and the second chances don’t go in, but on the other side you have to stay focused and deal with the situation in the game because anything can happen. You can’t stay in the moment where you are disappointed because you didn’t score the chances you had.

“[The clean sheet] is also a good feeling for those guys [in the much-changed defence] and for the team.

“It gives us confidence because the last few games we’ve conceded a lot of goals so that will help us as we look towards Chelsea next. Hopefully we can get a winning streak.”

The Reds remain with the ambition of finishing in the Champions League spots again this season, despite all the setbacks and issues we’ve had to deal with.

Three points earned at Bramall Lane and poor results for the likes of Leicester and West Ham means the Reds are just two points off fourth now.

But consistency is everything, and our Dutch midfielder made it clear that the win over Sheffield United has to be just the start of a run to move up the table.

“That’s what we have to do if we want to finish in the top four. We have to put a run together and just hope the teams above us slip.

“We can only control our own performances so we have to look at it game by game, give everything and try to win the games.”

Winjaldum’s insistence that not conceding against Chris Wilder’s side was of immense importance was echoed by several members of the squad, as they took to social media after the match.

Glad with this solid win and clean sheet ??? pic.twitter.com/DrcChYDucE

A clean sheet and a win on the road. Perfect Sunday. ?? pic.twitter.com/Y3EbXysM2r

Curtis Jones made reference to Alisson Becker in his post-match interview and those sentiments were followed up by stand-in stopper Adrian.

Well earned 3?? points tonight… happy to be back between the sticks again getting a lovely clean sheet, this one is for you, hermano @Alissonbecker
??? #YNWA #AlwaysTogether pic.twitter.com/d4qUrHx5M7

Well done boys! 3pts and a goal ?….That was for you brother! @Alissonbecker ?? pic.twitter.com/bXdnU7oa8R

Two Reds also made a welcome return from injury, with James Milner and Naby Keita getting their first run-outs with late sub appearances.

And several other players took to social media to praise the overall performance level of the team and to look forward to future challenges.

A tough battle and a very well earned 3 points! pic.twitter.com/lX8bvGMroV

Happy with my first PL win, now we have to keep going?? @LFC#SHULIV pic.twitter.com/MU09pwrhGP

Next up comes a crucial match in the battle for the top four, as the Reds face Chelsea on Thursday night.

As Gini said, it’s important to string together a run of good performances and results, with the Blues currently just ahead of the Reds in the table and unbeaten so far under new boss Thomas Tuchel.