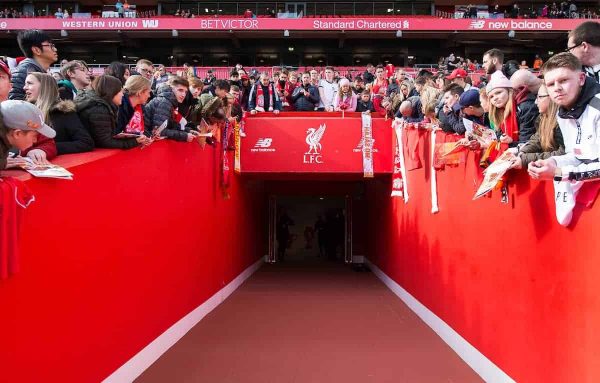 Liverpool have reached out to season tickets holders to show their appreciation with a class gesture for the upcoming season.

It’s been a tough 16 months around the world due to the pandemic, with nothing as it was once – including the tradition of going to the match.

Football is more than just a game, it’s a community and it’s a form of escapism that has been greatly missed, with the end of the 2020/21 season a welcome return to some normalcy with 10,000 inside Anfield.

The hope is that Anfield will soon welcome back a full crowd with UK restrictions scheduled to lift on July 19, restoring a sorely missed part of our lives.

And looking ahead to the new season, Liverpool are to pay tribute to the club’s season ticket holders for their continued support by embellishing their names in the player’s tunnel for the duration of the campaign.

Nice touch from the club ? pic.twitter.com/gh5eFhq4NW

In an email from Phil Dutton, the vice president of ticketing and hospitality, Liverpool are eager to “show our appreciation and to say a proper thank you for remaining by our side” and want to “encapsulate just what you support means to us.”

It is a touching gesture that will be appreciated by many after an extended period away from the stadium, with only four home games last season open to a select few fans.

Liverpool stress that fans can opt out of the initiative if they so wish, with names set to appear in the tunnel until the end of the season and potentially for any subsequent seasons – where permission will be sought once more if that is the case.

The Reds have in the region of 27,000 season ticket holders and it will be an appreciated gesture at a time when they can now hopefully both see their name in the tunnel and watch the Reds live on the pitch.

The expectation is that the opportunity to return to Anfield en masse will arrive in pre-season, with friendlies against the likes of Rangers, Osasuna and one of Newcastle or Aston Villa mooted.