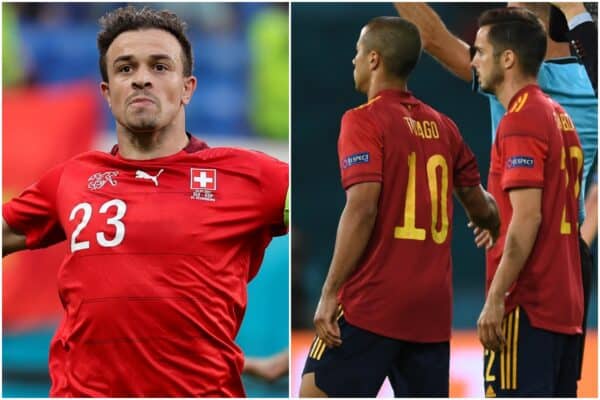 Xherdan Shaqiri scored his third goal of the Euros as Switzerland took Spain to the limit on Friday, but it will be Thiago in the semi-finals after a shootout victory.

With Granit Xhaka suspended for the quarter-finals, Shaqiri wore the captain’s armband for his nation in their clash with Spain in St Petersburg.

It was a difficult start for the Swiss, as Jordi Alba’s effort was diverted in by long-rumoured Liverpool target Denis Zakaria in the eighth minute, putting Vladimir Petkovic’s side on the back-foot.

Despite Spain dominating in terms of efforts it was a relatively even game throughout, with Switzerland’s main threat coming from corners, of which Shaqiri took many.

Steven Zuber came close to levelling the scores in the second half only for Unai Simon to make a smart block, before a stroke of fortune broke for the underdogs.

With the ball bouncing kindly for Remo Freuler, the midfielder was able to square it to Shaqiri in the box for Liverpool’s No. 23 to stroke home with his weaker right foot to make it 1-1.

Freuler was later shown a red card by Michael Oliver in a questionable incident, which left Switzerland – without Shaqiri, too, having been substituted four minutes after the sending off – to hold on for penalties.

Unfortunately, they were unable to replicate their heroics in the last 16, with Fabian Schar, Manuel Akanji and Ruben Vargas all producing woeful spot-kicks to undermine the efforts of Yann Sommer and put Spain through to the next round.

Thiago made his third appearance of the tournament with seven minutes left of extra time, with all three of his Euros outings coming from the bench, amounting to 50 minutes on the pitch so far.

It is a strange role for the world-class midfielder, but Luis Enrique has preferred Pedri, Rodri, Koke and Sergio Busquests throughout, reducing Thiago to a peripheral role.

Spain’s victory set up a semi-final clash against Italy, who advanced at the expense of Belgium later in the evening, with the Reds’ No. 6 likely to be a substitute again on Tuesday.

For Shaqiri, it is a proud but disappointing end to the tournament, with the winger taking to Instagram after the game to praise his team-mates for going “so close.”

“So proud of every member of this team!” he wrote. “Thank you my brothers for these amazing emotions during the Euros!”