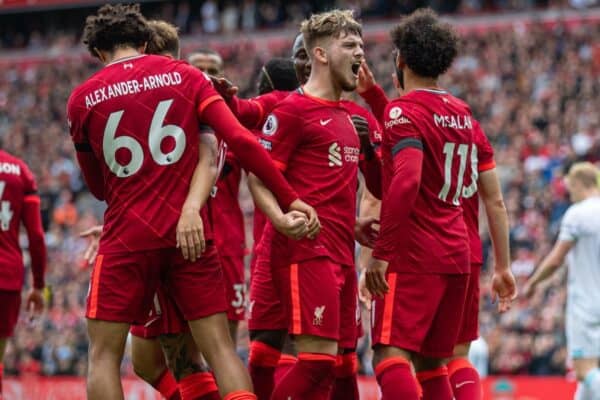 Are Liverpool walking squad depth tightrope with no further signings?

As deadline day steadily approaches, just how well-equipped is Liverpool’s squad to battle on all fronts this season?

The Reds have made an ideal opening to their 2021/22 campaign, but it has been a quiet summer on the transfer front, with Ibrahima Konate the only new signing.

Gini Wijnaldum and Xherdan Shaqiri are among seven players to have permanently moved on and the argument about whether or not Jurgen Klopp needs to bring in new faces continues.

And so we’ve taken a look at both sides of the argument ahead of a key period in the transfer window.

Squad is strong as is

If Klopp’s options were depleted last season, he now finds himself with a plethora of them at his disposal.

The Liverpool manager was able to field a formidable starting lineup for Saturday’s 2-0 win at home to Burnley, despite Andy Robertson, Fabinho, James Milner and Alex Oxlade-Chamberlain all not seeing any minutes.

On the face of it, this is a squad that looks primed to compete across four different competitions.

Liverpool now have four top-class centre-backs contesting for playing time – the goalkeeping situation is also strong – which is a luxury that seemed unthinkable in 2020/21.

Neco Williams is admittedly still a work in progress but will hopefully mature into a reliable deputy to Trent Alexander-Arnold, while Kostas Tsimikas has thrived in the absence of the injured Robertson.

Meanwhile, in midfield, Liverpool possess an eclectic mix of combative and creative figures of varying ages.

The vastly experienced trio Fabinho, Thiago and Jordan Henderson, who have over 1200 combined career appearances but average an age of 29, would arguably make up the Reds’ ‘best’ midfield, but there is no guarantee of that.

Naby Keita‘s encouraging start to the season makes him a deserved starter currently, while 18-year-old Harvey Elliott excelled on his first Premier League start on Saturday where Klopp quickly acknowledged his “mature game.”

The youngster already looks like a trustworthy squad player, rather than someone who will suddenly only feature in the domestic cups.

That player could very well be 16-year-old Kaide Gordon, who caught the eye in pre-season.

* Could still depart this summer

Further down the pecking order, Milner, Jones and Oxlade-Chamberlain all bring their own plus points, from the former’s evergreen dependability to the latter’s forward drive.

Liverpool’s attack remains as potent as ever, too, with Mohamed Salah, Sadio Mane, Diogo Jota and Firmino all vying for minutes and presenting a welcome selection headache for Klopp.

There was a time when the dropoff from the front-three was huge, but having four elite attackers has alleviated that issue, and the return of fans looks to have certainly reinvigorated the No. 9.

It’s difficult to have many qualms with Liverpool’s squad, but a few key factors cloud the current situation.

The biggest concern surrounding Liverpool’s squad is fitness, with a number of figures either returning from serious problems or proving to be injury-prone.

The early signs suggest that Virgil van Dijk is back to his very best, and with Gomez being eased back in and Konate waiting in the wings – Nat Phillips could also still stay put – centre-back shouldn’t be a problem.

Midfield is a more intriguing area, though, with Keita and Oxlade-Chamberlain two players who have been hard to rely on in recent years.

In the last three seasons, the pair have made just 52 league starts between them from a possible 228 matches combined.

Keita may be thriving at the moment, but another setback would suddenly leave the midfield looking lighter, especially with Thiago, Henderson and Milner all in their 30s and not without injury problems themselves.

Meanwhile, Elliott and Jones are still maturing as footballers and won’t yet necessarily perform at a high-level week in, week out – nor should they have to.

For this reason, the addition of another central midfielder wouldn’t go amiss and Atletico Madrid’s Saul Niguez jumps out as an ideal target.

The Spaniard is at an age (26) where he still has years ahead of him but has already made 339 appearances for the current La Liga champions, highlighting his experience.

A loan move could even be in the offing, if recent reports are to be believed.

Eduardo Camavinga is another who could add depth in the middle of the park, with Rennes reportedly willing to sell him for €35 million (£30m) this summer.

At 18, he would represent both a present-day and long-term option, with his average of 2.8 tackles per game in Ligue 1 last season greater than any Liverpool player in the Premier League, Thiago topped the pile with 2.5.

The other major issue lies with the fact that Keita, Salah and Mane will all depart for the Africa Cup of Nations in January and potentially into early February, giving Klopp a mid-season headache.

Granted, the trio should only miss the league games at home to Brentford (January 15) and away to Crystal Palace (January 22) in addition to the FA Cup third round, but it is far from ideal.

The onus would suddenly be on Jota and Firmino to stay fit, following a relentless Christmas schedule, during which time fatigue could be setting in.

The signing of another forward would, therefore, be wise – a younger option who could be viewed as an exciting prospect, but also someone ready to do a job immediately.

Names who stand out include Wolves wide men Pedro Neto and Adama Traore, Belgian youngster Jeremy Doku and West Ham‘s Jarrod Bowen, all of whom have been linked with moves to Liverpool.

Unpredictable Newcastle trickster Allan Saint-Maximin is a more left-field option, while Ismaila Sarr may also still be on Klopp and Michael Edwards’ radar.

Doubts still remain over Takumi Minamino and Divock Origi being able to fill the void, they have 11 goals between them over the last two seasons, so it would be hugely risky to depend on them and ignore a new signing.

No business would be negligent

If no new additions come in once September 1 arrives, it shouldn’t be deemed a disaster for Liverpool.

There’s an argument to say that it would be negligent, however, at a time when the Reds must continue to compete with big-spenders Man City and Chelsea.

If Liverpool were guaranteed an injury-free season, their options would be strong enough to challenge for the title, but too many individuals have question marks against them physically and we saw how quickly it can all unravel last season.

Keita and Oxlade-Chamberlain are the two who spring to mind most, and with others around them ageing, a new central midfielder makes perfect sense.

Similarly, Shaqiri’s exit has opened up a space in more attacking areas, even if the prodigious Elliott can help fill that void.

AFCON has the potential to be problematic, so acquiring the signature of another forward in the mould of Salah and Mane is important to help spread the load at a time of the year Liverpool have known to struggle under Klopp.

It remains to be seen what will occur in the days leading up to the close of the window, but it could prove to be a pivotal period in Liverpool’s season come next May.

The FSG-aimed pitchforks will be out if the Reds’ squad isn’t refreshed – if that happens, the owners will need injuries to be kind this time around.