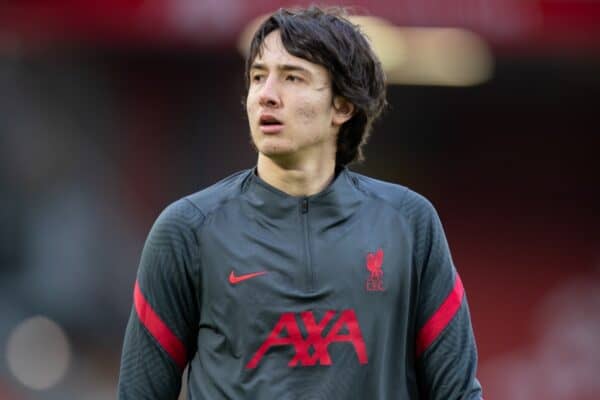 Young Liverpool goalkeeper Marcelo Pitaluga has been lavished with praise after his first 90 minutes of action in six months, standing out for the under-23s.

Pitaluga had not been involved for the young Reds since a 3-2 win at Chelsea in February, which saw him helped off just before half-time with a muscle injury.

The Brazilian ultimately missed the rest of the campaign, but was part of the lap of honour at Anfield on the final day of the Premier League before heading to the Algarve for further rehabilitation work.

Spending pre-season with the first team, Pitaluga remains a regular in senior training while turning out for the academy sides.

The second game of the under-18s’ season – a 5-0 thrashing of Man United – saw the 18-year-old play 45 minutes before being replaced by Harvey Davies in a planned substitution.

A week later, Pitaluga started and played the full 90 minutes in the U23s’ 1-1 draw with Brighton, producing a number of strong saves to keep Liverpool in the game against a strong Seagulls side.

His manager, Barry Lewtas, reflected on a landmark for the £1.8 million signing from Fluminense, hailing him as “excellent.”

“I said to him after the game, ‘that was your first game back at this level and you did so well’ because he had so many corners to deal with which he dealt with really well,” Lewtas told the club’s official website.

“I was really pleased for him.

“He’s had a bit of time out through injury but I think to come back at this level with a performance like that speaks volumes about his personality, his character and also his ability.”

While the goalkeeping ranks are particularly strong at Liverpool, with Adrian third choice behind Alisson and the 22-year-old next-in-line Caoimhin Kelleher, Pitaluga is clearly being primed for a step up.

He has impressed coaches at both senior and academy level, and his performances with the U23s over the course of the season could see him cement himself as a long-term option.

As Lewtas attests, Pitaluga’s mentality is one of his key assets, allowing him to adjust well to life in England and an increase in expectations.

It remains to be seen how the young Brazilian progresses in the years to come, but there is a clear path in place for him at Liverpool.