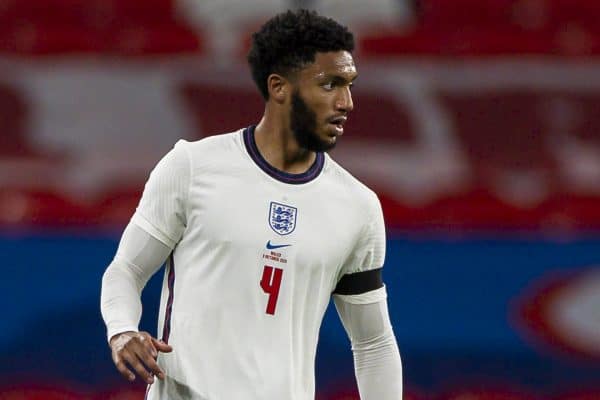 England manager Gareth Southgate admits he is “very cautious” over a return for Joe Gomez following his long-term injury, saying it is a “really important one to get right.”

Gomez missed eight months of action after suffering tendon damage in his left knee while training with England during the November international break.

After making his return with three appearances during pre-season, the 24-year-old has been on the bench for the first three games of the campaign, with Jurgen Klopp preferring Joel Matip as partner to Virgil van Dijk.

There will be a time when Gomez and Ibrahima Konate are both utilised – perhaps as early as the League Cup third-round clash with Norwich on September 21 – with the depth of Liverpool’s centre-back ranks particularly impressive now.

It is clear that both Klopp and Southgate are mindful of risking re-injury when it comes to Gomez, and speaking on his chances of a recall to the England setup, the latter said he was “very cautious.”

“Joe we kept in contact with throughout his rehab. We would be very cautious about when we put Joe back in,” he told reporters, as relayed by the Mirror.

“The rehab from that injury is a really important one to get right, he needs to be settled in with Liverpool with plenty of minutes on the pitch, feeling in a good place with all of that, before we start thinking of selecting him with us.

“But he’s a boy we think a lot of and it’s good to see him close and available for selection which is great.”

It has been a tough time for Gomez in recent years, with a series of long-term injuries providing setback after setback, but when fit he is a top-class defender.

Still only 24, there is plenty of time for the Englishman to recover and reclaim his starting berth for both club and country, with his issues not an indication of him being prone to injury.

Rather, Gomez’s problems have largely been freak or contact injuries, which suggests he is unfortunate rather than unreliable.

In a long season, he will undoubtedly get his chance at the back for Liverpool, and hopefully at that point he can prove he is still capable of performing at the highest standard as he has in the past.