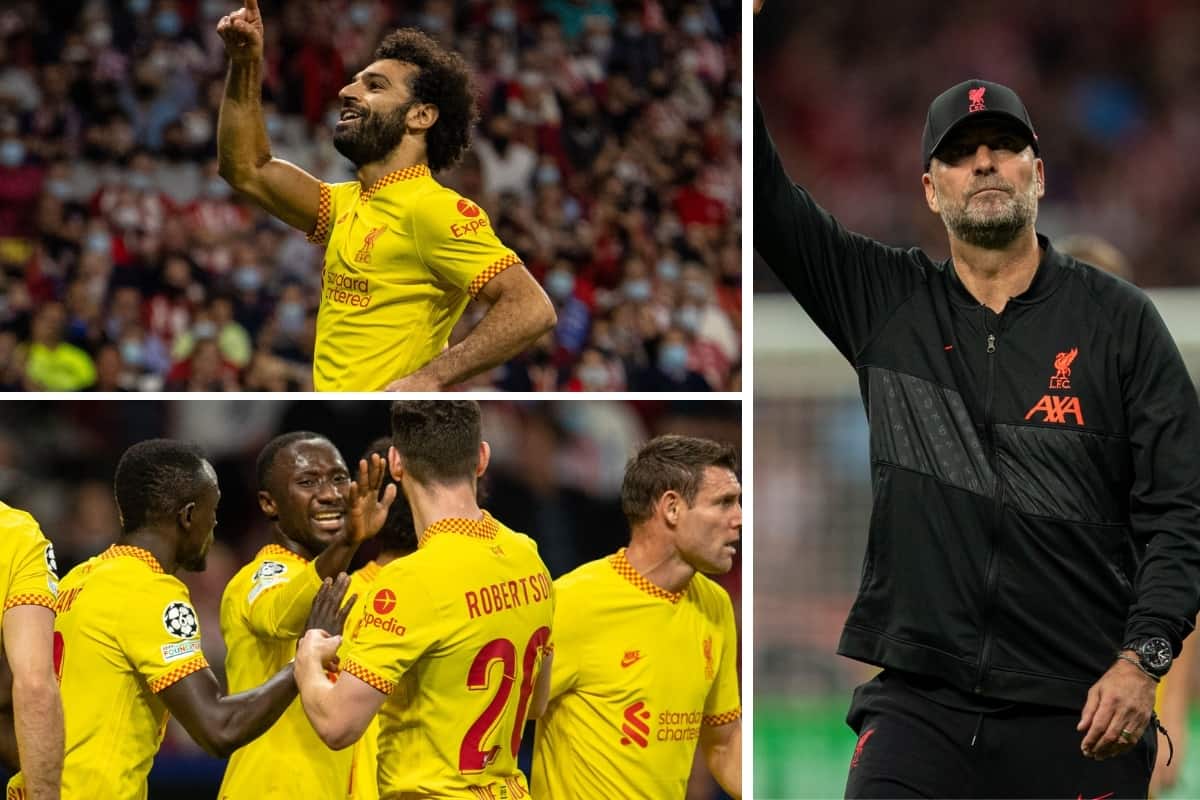 Liverpool sealed a vital 3-2 Champions League victory over Atletico Madrid on Tuesday night, but after a difficult night in Spain how do supporters feel looking ahead?

The Reds surprised Atletico early on at the Wanda Metropolitano, with goals from Mohamed Salah and Naby Keita forcing Diego Simeone’s side to come out of their low block.

That they did, with Antoine Griezmann restoring parity before the break, only for Salah to net the decisive penalty in a dramatic second half that saw Griezmann sent off.

It was the first time Atletico have lost at home in Europe since 2017, and Liverpool deserve credit for the manner in which they won.

But there has still been criticism of certain players in the aftermath, which makes the post-match discussion an interesting one.

Here, This Is Anfield’s Jack Lusby (@LusbyJack) speaks to Karl Matchett (@karlmatchett) and Lewis Bower (@LewisBower2021) in the wake of Liverpool’s big win.

A big win in Madrid…

KARL: Can’t complain all round when you win away in Europe, especially somewhere as difficult to go as Atletico is!

The group stage mostly gets ignored later in the season, unless you happen to progress with a late winner en route to winning it, so as Jurgen put it, a dirty win is perfectly fine.

We’re almost there and the biggest positives from this match are more to do with the coming weeks than the performance level itself – if we complete the job at Anfield in the next game, we can rotate and rest accordingly.

LEWIS: Salah continues to be the best player in the world.

It’s not just the goals, but the speed of thought and execution. He’s better than ever with more variation to his game, although he’s always been underrated as a creative outlet.

It’s a blessing to watch Salah play football at the moment.

It was nice to see Ox come from the bench and make a sizeable impact. He added a little impetus in both attacking and defensive phases.

It’s important that bench players are ready to come on and I think Ox would tell you he isn’t happy with his minutes and performances this season. Hopefully it’s a springboard.

JACK: Like Karl says, it really doesn’t matter how we get these wins, just that we do.

I had low expectations going into the game and couldn’t believe how lax Simeone’s setup was, particularly given the Watford game three days earlier – a back five, with a winger up against Salah? Really?

To Atletico’s credit, they clawed back into the game and were somewhat unfortunate to go down to 10 men, but Liverpool’s quality shone through.

Three wins from three is the key positive. It could make the festive period much easier.

What do you make of the Naby Keita criticism? 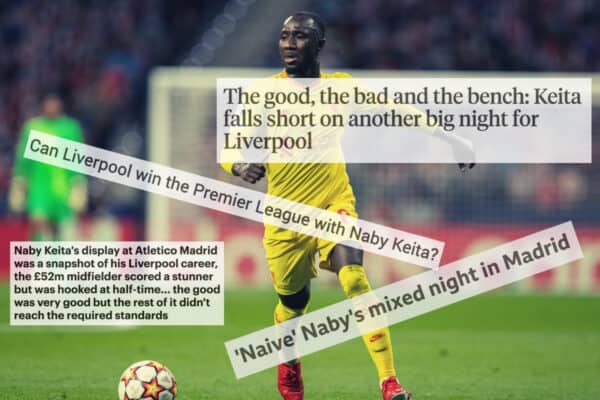 KARL: Same as usual: I mostly ignore it.

We played a midfield three which were thrown together at the weekend because they were fit, no other reason.

They did pretty well, but the difference between Watford and Atletico is vast, and each of the three players has had real issues with playing back-to-back games in recent campaigns.

So a few leggy showings, missed moments and inability to go the distance was expected.

As for the criticism for the goals, as usual they ignore much of the rest of the context of what goes on in team shape and positional work elsewhere, so as I say: I ignore it.

LEWIS: I understand the criticism in the vacuum of last night’s football match, but not how it is weighted throughout the over-arching commentary of the entire squad.

There have been midfield lapses, especially defensively, throughout the season thus far.

This was notable against Milan and Brentford, while Man City did shine the brightest light on the midfield – but they are one of the best sides we will face this year.

There has been very, very little input from reputable journalists on such problems in a draws against newly promoted sides or a half-decent Milan win, but a first away win in the Champions League over Atletico in 40 matches draws out the knives – in a game where Keita’s midfield counterparts did not cover themselves in glory either.

Keita has had a difficult time at Liverpool; he does not choose to be injured.

It is a shame that now he has finally overcome a string of injury issues he is seemingly targeted for a level of performance his team-mates would not be.

Naby is held to different standards, it feels.

It is not about shifting blame either, or feature-length articles about other players, but Keita deserves to be judged against the same standards as his team-mates – as one of Liverpool’s best performers this year. 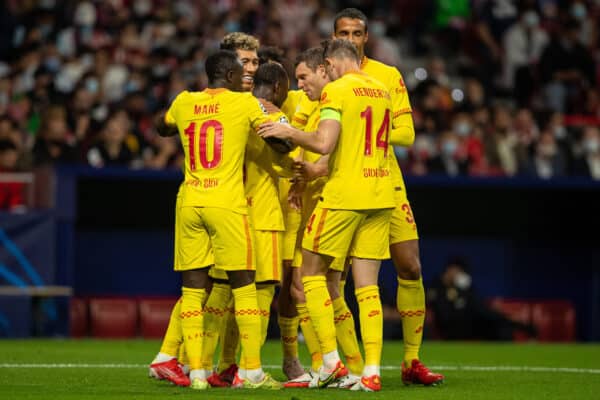 JACK: Liverpool are the first team to beat Atletico at home in the Champions League in four years, but much of the focus – and negative focus at that – from Merseyside journalists after the game was on one player.

It was far from a vintage performance, and Keita was at fault in the buildup to Atletico’s goals, but he also scored a stunning volley and was not the only player to struggle.

If it was the similarly poor James Milner who was hooked at half-time, would there have been as many column inches about the vice-captain?

In my player ratings immediately after the game, I scored Milner, Trent Alexander-Arnold, Andy Robertson and Sadio Mane all lower than Liverpool’s No. 8 – but in the context of the win, they should all have been higher anyway.

As Karl and Lewis note, it all conveniently ignores the wider picture and is hugely unfair on Keita.

And would you make any changes for Sunday?

KARL: Yep. If fit, Curtis comes in. Fabinho is definitely in.

Expect the rest will be ‘as you were’, with either Milner or Henderson starting the right side of the three in the middle.

No changes in attack and I’d only swap a centre-back in for Matip if he’s struggling for any reason, but there’s a fair old gap between Atleti and Old Trafford so we should have no concerns over recovery and being at 100 percent.

JACK: Though the criticism was unjust, I’d hazard Keita is one of those to come out for Sunday, as Fabinho is a guaranteed starter.

Beyond that, and perhaps a rotation of centre-backs to include Joe Gomez, there is little need for changes with five days between games.

LEWIS: I’d like to see Fabinho come in for Milner. Fabinho, Henderson, Keita.