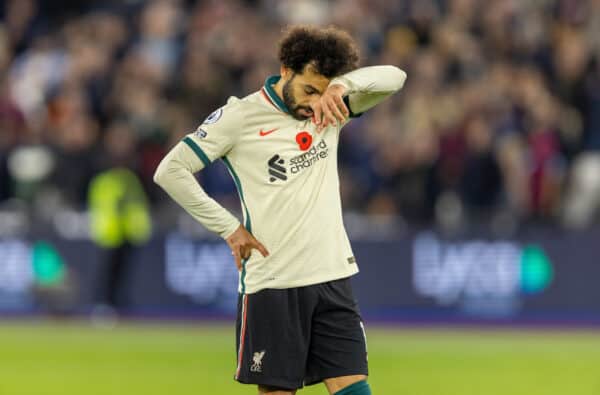 Liverpool dropped to fourth in the table after what was a disappointing result going into the international break, losing 3-2 away to a battling West Ham side.

Set pieces are one of West Ham‘s favourite routes to goal, and it proved to be so again as Pablo Fornals opened the scoring directly from a corner.

Not before a VAR check, though, as the traffic around Alisson meant there was always the potential for a foul on the goalkeeper.

The officials seemed to focus on the presence of Angelo Ogbonna, as he was the closest to Alisson when the Brazilian challenged for the ball.

But the real problem for the goalkeeper was Michail Antonio who was on top of him, perhaps even holding him, right until the last second as the ball came in. This prevented Alisson from getting a run at the ball and from being able to leap higher.

In the end, it wasn’t a foul by Ogbonna, but neither can Alisson be blamed too much for the incident due to the presence of Antonio.

He could have hung back, he could have made more of the initial contact from the striker, but there was little else he could have done as Fornals’ corner floated directly into the goal.

The entire defence didn’t cover themselves in glory, and only Virgil van Dijk can emerge with any credit, but Alisson could have done better for the second goal as he was only able to get a weak hand on Fornals’ shot.

It wasn’t the best afternoon for the Brazilian, but it’s very rare a goalkeeper will go an entire season without a game like this.

Unfortunately for Alisson, many of those in front of him were just as bad.

Liverpool haven’t felt like a threat from free-kicks in recent times, despite Trent Alexander-Arnold having scored the odd one.

But the foul on Mohamed Salah occurred an ideal distance from goal to get the ball up and over a wall.

Liverpool worked the free-kick to the point it didn’t even have to go over the blockers as Alexander-Arnold rolled it for Salah to control before the right-back curled it around the wall and into the top corner.

The last free-kick Trent scored came against Chelsea at the end of the 2019/20 season, so this was a welcome strike – and maybe one Liverpool were due.

Another missed chance in the title race

This result plus the recent draw with Brighton were missed opportunities for the Reds to really make a statement at the top of the table.

Man City‘s recent loss to Crystal Palace and Chelsea‘s draw with Burnley show that none of the title challengers are without their weaknesses.

But Liverpool have failed to capitalise on dropped points by their rivals on both occasions, and are now even behind their most recent opponents in the table.

They could be top of the table by a point going into the international break but are instead four points off Chelsea. At least City and Chelsea look beatable, too.

West Ham‘s position in the table isn’t a fluke or just a lucky early run from an outsider. They have the potential to do well against top teams and have already knocked both Man City and Man United out of the League Cup.

Going into this weekend the Hammers had one of the tightest defences in the league, in so much as they didn’t allow the opposition to create good quality chances.

West Ham genuinely good at the moment. Also have the second lowest xG against in the Premier League. #WHUFC https://t.co/OsumG8Km8I

They are very good at turning their defensive shape into an attacking one on the break without leaving gaps, and this was exactly what they did in this win.

If Liverpool are to challenge for the title they should be performing better than this, but that West Ham were able to beat them isn’t as surprising as it might have been in previous seasons.

Premier League focus for the next three months

An international break on the back of a defeat is never fun: a long two weeks to dwell on a loss and no game in a few days to bounce back and quell the negativity.

But it at least allows the Liverpool players to regroup and it is also more time for Firmino, who was greatly missed against West Ham, to recover without missing games.

The Reds return to action with three home games in a row at the end of November, with the first of those a chance to show they mean business against an improved Arsenal side.

It’s an opportunity to get back to form by winning three in a row in two separate competitions.

With the Champions League wrapped up, they need to plan around this year’s league games rather than thinking about potential prize money for winning games in Europe.

Staying in the Premier League title race is the most important thing.