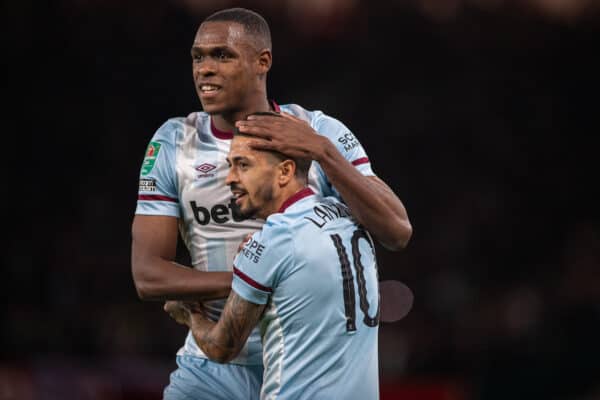 West Ham look set to provide Liverpool with a huge challenge on Sunday afternoon, with Hammers fans dreaming of a top-six finish.

That streak will be put to the test on Sunday, however, with an in-form Hammers side waiting to spring a surprise at the London Stadium.

David Moyes is excelling currently, creating a team full of energy, quality and team spirit, so Liverpool will need to be at their best to get all three points.

Ahead of the game, we spoke to Hammers fanatic and co-founder of We Are West Ham Podcast James Jones (@ByJamesJones) to hear about his team’s form, the Reds’ title chances and the weekend clash.

You must be delighted with West Ham’s start to the season?

Delighted is a massive understatement.

Last season came as a bit of shock for West Ham fans having battled against relegation for the few years before it, especially since moving into the new stadium, and there were some questions about whether we could repeat it this time around.

But David Moyes continues to work wonders and we’re picking up where we left off.

The fact we’re doing all this with such a thin squad and Europa League football to contend with is testament to the way Moyes is managing the squad.

He’s got everyone pulling in the right direction and that’s showing on the pitch.

We’ve only lost two games in all competitions this season, both of which came via last-minute winners, so that just shows how good and consistent we’ve been, which isn’t something we’re used to at West Ham.

What has been the key to the Hammers’ recent success?

The mentality is one. Moyes has completely overhauled the mentality of the players, as well as the whole club in general.

Even after beating Aston Villa 4-1 away, Moyes, Declan Rice and Ben Johnson all came out in front of the Sky cameras and admitted that while they were delighted with the result, there were elements of the performance they weren’t pleased about and will be working on.

West Ham managers and players of old would’ve been raving about it, now we’re being publically critical of ourselves, even after such an impressive result on the road.

It just proves that the mentality within the squad is exactly where it should be for a team battling for a top-six finish.

Also, the players are all playing for each other. As we’ve got such a small squad, it means everyone still has a role to play and I think that’s benefiting us.

It means no one is left out or frustrated at not getting enough minutes and it allows everyone to be on the same page in terms of what’s required.

What are your realistic aspirations for the season now?

At the beginning of the season, I think most West Ham fans would’ve settled for a top-10 finish and a decent run in Europe.

Fifteen games in and now we’re wondering whether we should be targetting another top-six finish and perhaps even a trophy.

If we win our Europa League group, which is looking likely, it means we go straight into the last 16, which is massive.

Anything can happen then. We’re also in the quarter-finals of the Carabao Cup and we’re establishing ourselves in the top four of the Premier League at the moment.

To be honest, I think many fans would sacrifice a few positions in the league if it meant lifting some kind of trophy.

We’ve not won anything since lifting the FA Cup in 1980 and it really feels like if we were ever to end that trophy drought, this is the squad of players and manager to do it.

Who do you see as West Ham’s three most important players?

Neutrals are beginning to wake up to the fact Rice is becoming a world-class midfielder, if he isn’t already.

He’s so important to us and the way we play and he does the exact same thing for England. Without him, our midfield suffers a little bit.

Antonio is just a handful up front and will always be amongst the goals if given the service. He will bully defenders all afternoon if he has to.

While he has been quite inconsistent with his goals and assists this season, Bowen’s work rate and pace on the wing will cause most teams problems.

Without him, we’re also not as effective going forward and he’s arguably been one of our unsung heroes of the season so far.

The fact that Liverpool are unbeaten so far says all you need to know about their title chances.

I’d say they have the most devastating attack in the Premier League, for obvious reasons, and that will mean that whatever happens, they will be there or thereabouts come May.

I’d love it if the Reds won it again because it would mean Chelsea didn’t, which would be lovely.

Which Reds player would you most like to see in a West Ham shirt, and why?

Mohamed Salah is an obvious choice but I think he’d suit the way we play down to a tee.

We’re pretty effective on the counter-attack so his pace and goalscoring ability would make us unstoppable in that area of our game.

He’s also the best player in the world right now, so what club wouldn’t want to see him playing for them?

Liverpool are so lucky to have him.

I think the battle between Antonio and Virgil van Dijk will be an interesting one.

They are two very physical players who are used to bullying their opposite numbers each week – it will be intriguing to see who comes out on top.

Elsewhere, the midfield battle could be the decider.

Rice will have a chance to show what he’s all about against a top-class outfit and if Fabinho isn’t playing then he might have a bit of an advantage when it comes to getting on the ball and making things happen.

He does that very well and is getting better at it with every game.

There are bound to be goals given the way both teams like to play and given the circumstances – I’d certainly take a point right now.

Salah will probably score a Puskas Award contender but Pablo Fornals will chip in with his obligatory goal against Liverpool.

Either way, I think this has the potential to be a really fun game of football.