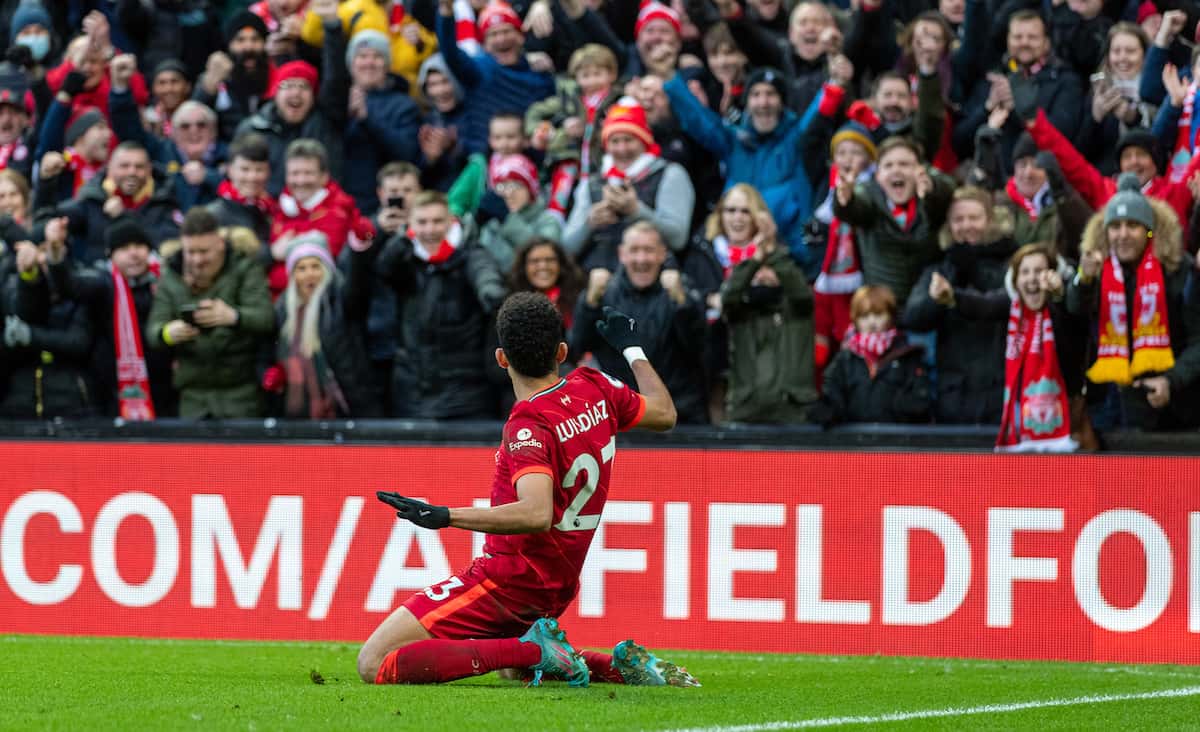 It was one each for Liverpool’s front three as Jurgen Klopp’s side came from a goal behind to earn an invaluable 3-1 win against a Norwich side that held their own.

The Reds were heavy favourites heading into the Anfield clash, even with seven changes from the win in Milan in midweek.

But what that did do is disrupt the rhythm in the XI and with chances left unfinished, Norwich took the opening thanks to a wicked deflection off Joel Matip.

Anfield roared to life with two changes, and after a couple of attempts of it at the San Siro, Sadio Mane did get his bicycle-kick goal to level the scores.

Mohamed Salah and Alisson then rekindled their Kop-end magic to put Liverpool into the lead with his 150th goal for the club before Luis Diaz opened his account.

It made for plenty of admiration for Klopp’s changes and the Reds’ forward contingent on social media.

Substitutes once again the difference today. Thiago is something else.

I’d say that was an instant change in Liverpool’s play since Thiago came on, and Origi has Norwich’s back four on ice. #LIVNOR

A five minute turnaround for the Reds.

Jurgen Klopp's new found ability Ro change a game with his substitutes will be huge. Can change shape and inject intensity. Thiago the catalyst

Jürgen Klopp’s substitutes have done it again for the second game in a row.

What an absolute manager.

And lots of love came the way of Mane, Salah and Diaz

what an absolutely RIDICULOUS goal for 150

so good, Mo Salah. Wrongfooted two defenders and I reckon about 50,000 pairs of eyes.

Diaz is going to be some player for us mate, unbelievable

The skill, the patience, the unerring calm to finish that, at this stage of the game. Salah is unbelievable. #lfc

starting front three all scoring in the same game, couldn’t be Liverpool

The ball, the touch, the feint, the goal.

Mo and Sadio have changed this club forever. Hendo is as important as ever.Thiago is brilliant at football. Divock is the greatest player to ever play the game. Diaz is just getting started. Klopp has created not one, but 2 or 3 unbelievable teams with this squad. #UpTheReds #LFC

ALL OF OUR FRONT THREE SCORING.

THINGS YOU LOVE TO SEE.

Fuckin loved the fight we showed there you know. Even at 3-1 the lads were killing themselves to win the ball. Brilliant. Massive massive win!! Henderson and Gomez were incredible! Mane, Salah and Diaz just magic! Get in redmen!! Pass a bevy ??

It was panning out as one of those games for the Reds, but that Klopp called in the cavalry, namely Thiago, he changed the game in a matter of moments.

The boost for each of Mane, Salah and Diaz will be immeasurable and ahead of a huge week with Leeds and a cup final to come, it’s one that keeps the momentum firing on all cylinders.

Reds could have done without the scare but that’s another three points in the bank and pressure placed on Man City, job done. Now onto the next one.