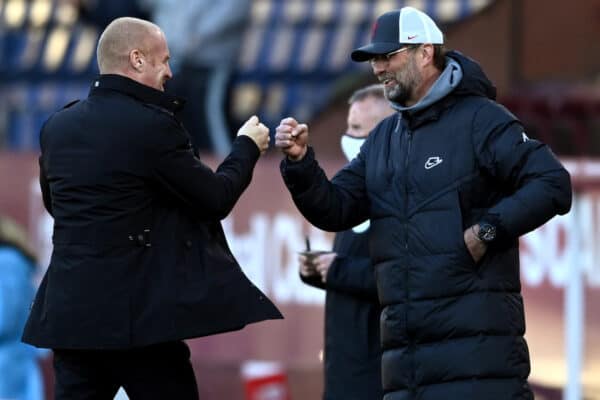 Jurgen Klopp doesn’t expect “we have them early” feeling vs. Burnley

His side may be chasing a club-record fifth successive victory in meetings between the sides at Turf Moor, but that does not mean the Reds have had it easy against the Clarets.

And Klopp believes their opponents’ position at the bottom of the Premier League is not a true reflection of their status.

“I’ve been six-and-a-half-years here and playing there was always uncomfortable, there was not once one game where I thought ‘we have them early’. It never happened,” he said.

“They stay in the game with the mentality they have. I had the pleasure to watch the Tuesday night game against United and probably this situation explains the Premier League best.

“Burnley are bottom of the table, with games in hand I know, but the quality they produced that night was incredible, especially the second half.

“They played pressing up the pitch and it was a proper team performance and together with the stadium that is the thing they need to do – they know better than I do – to stay in the league.

“It sounds like when you are in February and bottom of the table no one cares about the games you have in hand but there is a big possibility for them to stay in [the league] because of the power they can produce as a team.

“We have to be ready, that will be a tough one definitely.”

Klopp, whose team is on a five-match winning run in all competitions, knows Burnley pose a threat unlike any other in the top-flight.

The January addition of Wolfsburg striker Wout Weghorst has only increased the danger to his side.

“They have brought in a new striker and if you saw the game on Tuesday you will have seen he is a pretty lively boy up front,” he added.

“He fulfils the role of Wood for sure, deflecting balls, but he was really very active all over the pitch.

“Burnley ask for all the physicality you can put in a game because we cannot have the ball all the time and in the moments they have the ball they do exactly what they want to do.

“We just have to be aware and really focused and really concentrated and that’s how we prepare the game.

“We are ready for a proper fight and if we can match the intensity of Burnley or even go over it then we have a good chance.

“If not, rightly so, we will get nothing and that’s football.”