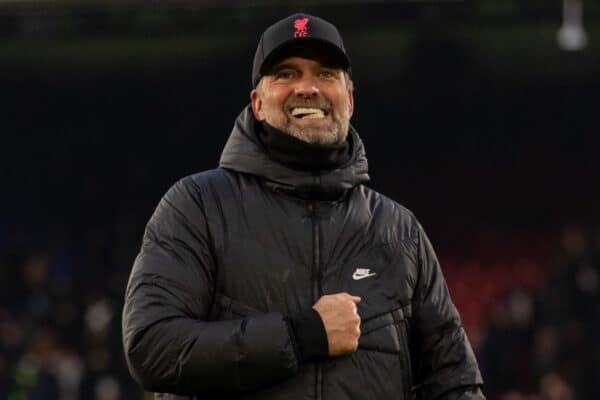 Liverpool manager Jurgen Klopp insists there is no point in focusing on chasing Manchester City as the Premier League table can change so quickly.

The 6-0 demolition of Leeds – the club’s biggest home win since September 2007 – lifted the Reds to within three points of the defending champions and current leaders.

It also boosted their goal difference so they are now four ahead of Pep Guardiola’s side having played the same number of games, but by the time Liverpool play the Carabao Cup final against Chelsea at Wembley on Sunday, City could be six points ahead again.

That is why Klopp is not focusing on the table, merely on squeezing as much out of his players as he can.

“The thing is now we have the cup final at the weekend, City play (Everton) and they might probably win this game and it’s six points again before we play the next Premier League game.

“We don’t have to count these things. We just have to win the game.

“It is an interesting period of the season definitely: we play the final, then FA Cup, then West Ham and no-one should count the points before we play them because we lost there.”

Nevertheless, Klopp’s celebration in front of the Kop at the end – firing out eight fist pumps instead of his usual three – hinted at how significant he felt the result and performance was.

“I’m not sure had it been 10 seconds later I wouldn’t have done it but in that moment I got carried away,” he added.

“I really love how the whole stadium responded tonight to the game and how we were able to win the game as a unit and I couldn’t be more thankful for the support of the people.

“I am really happy that from time to time – it will not happen a lot – we can give them a performance and scoreline like tonight.”

After a seventh defeat in 10 matches, Leeds are now only three points above the relegation zone but head coach Marcelo Bielsa insists he will continue to stick to his principles.

“How am I not going to question what I’m doing? Of course, I question myself,” he said.

Asked whether the owners had expressed concerns about the club’s slide towards the bottom three, Bielsa added: “Not specifically but when a team is going through what we are going through it is only going to awaken doubts.

“And I know the consequence of the succession of results of the team I manage.”