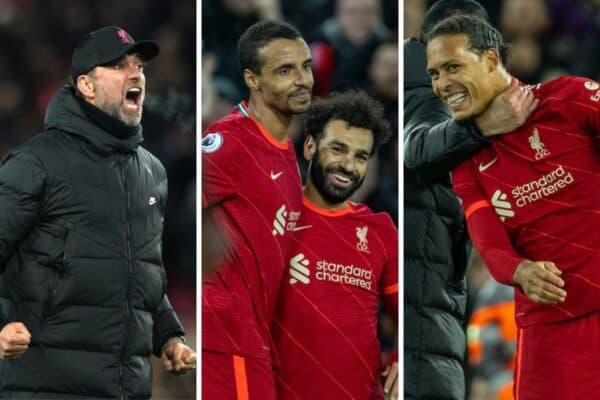 Nerves? Not for Liverpool against Leeds as they sought to cut the gap down to three points, with a 6-0 rout an emphatic signal of intent from Jurgen Klopp‘s side.

There was to be no hiding from the significance of Wednesday’s match, with the rearranged game demanding three points to take the title race up another notch.

And the Reds delivered. Six-fold.

It had all you would want, starting with Mohamed Salah converting from the penalty spot with conviction.

And then came the moment we have all dream off. Joel Matip‘s marauding run ended with a goal and it was as glorious as we all hoped it would be.

From 40-yards deep to a one-two with Salah and then a first-time finish, it was a delight and his teammates’ reactions showed just how well-liked he is.

If that was not good enough, Salah then notched his second penalty of the night just 20 minutes after his first – this time with a thumping finish high into the net for his 27th goal of the season.

That concluded a rampaging first half but the pain for Leeds did not stop there, with three more goals added to the scoreboard within the last 13 minutes of play.

Sadio Mane was responsible for two, working himself into the perfect position to convert from the deliveries from Jordan Henderson and Divock Origi – there are those impact subs again!

And just when you thought it was to finish 5-0, Virgil van Dijk was left to freely roam the box to convert from Andy Robertson‘s header, making for more jubilant scenes in front of the Kop.

Would you look at those smiles at full-time, we love to see it.

Just look at what it means!

The perfect night for Liverpool with six goals, a clean sheet and the gap at the top of the league cut to three. Now, it’s time for the League Cup final. Off to Wembley we go.