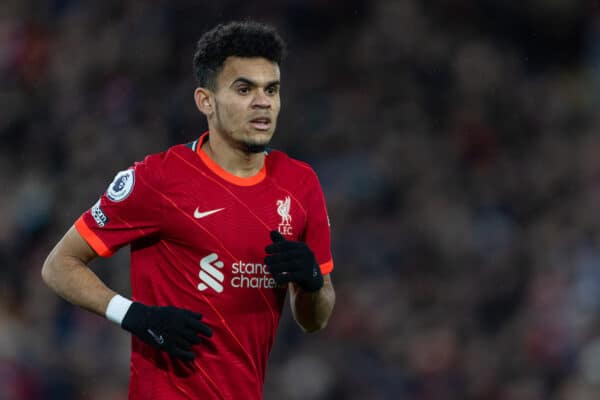 Brighton 0-2 Liverpool: Player Ratings – What the media and statistics say

Luis Diaz was again the star of the show in Liverpool’s 2-0 victory away to Brighton, as the Reds picked up another three points in the Premier League.

Jurgen Klopp‘s men faced a potentially tricky visit to the Amex on Saturday afternoon but came through it with a win.

It was Diaz who opened the scoring, heading past Robert Sanchez, before Mohamed Salah sealed the win with a second-half penalty.

Liverpool are now back to within three points of Man City, as another title battle gathers momentum by the week.

Here we compare our player ratings with those from the Liverpool Echo, the i, WhoScored and FotMob and the TIA readers.

The Colombian showed great bravery to head home the opener and he looked a huge threat every time he isolated a defender one-on-one.

TIA’s Henry Jackson described Diaz as “magnificent” against the Seagulls, also declaring: “This lad is going to be a superstar.”

Ian Doyle of the Echo was similarly impressed with the winger, hailing his “superb” work ethic and “threat” on the counter-attack.

Joel Matip (7.8) came in second place for Liverpool, performing immaculately at the back and assisting Diaz’s goal.

The 30-year-old won all four of his aerial duels, according to FotMob, which summed up his level of dominance.

The former was lauded as the “best in the world” in his position by Jackson, while Doyle handed the latter a nine-out-of-10 rating.

Fabinho (6.6) and Naby Keita (6.6) got the joint-lowest averages, but in truth, both played well.