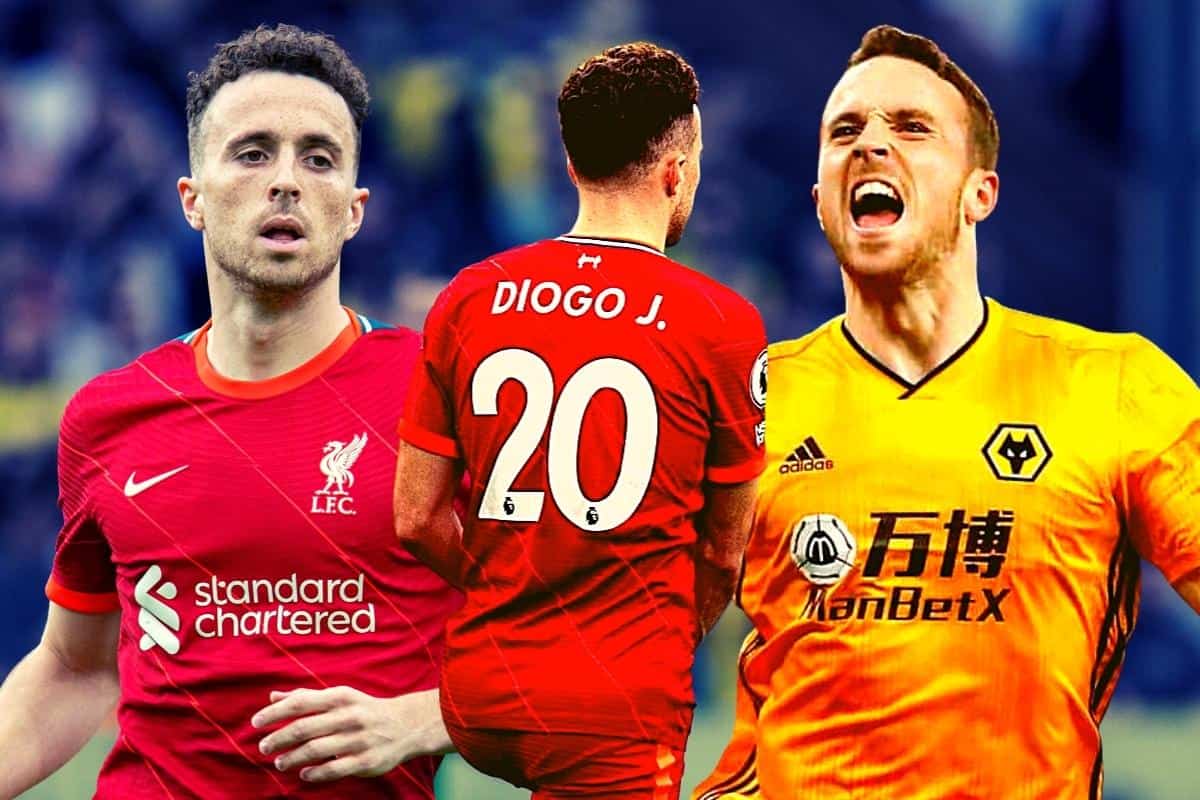 You may or may not already know, but Diogo Jota is not the real name of Liverpool’s No. 20, with the Portuguese’s shirt at Wolves closer to the truth.

Jota, as he is now almost universally known, was not called that when he was younger.

Instead, the first son of Joaquim and Isabel was born in Massarelos, a parish of Porto, under the name Diogo Jose Teixeira da Silva.

While his first name may be less common in elite football, his other names are much more frequently seen on the backs of shirts.

For example, Joao Carlos Teixeira, the attacking midfielder born 45 minutes up the coast from Jota, spent four years with Liverpool before departing for Porto in 2016, briefly becoming team-mates with the free-scoring forward.

So why did Diogo Jota change his name? Here’s what we know.

When did he change it?

It is claimed that a young Diogo would request ‘Diogo J.’ on the back of his shirt from a young age, supposedly to differentiate himself from the other Silvas.

He was effectively known, then, by his first and second names, Diogo Jose.

His brother, Gondomar midfielder Andre, kept the family name – which could see him easily confused with the RB Leipzig striker Andre Silva.

So why do we know him as Jota?

Put simply, the Portuguese pronunciation of the letter J is ‘jota’.

It is pronounced with a hard J, unlike former Brentford, Birmingham and Aston Villa midfielder Jota, whose name is pronounced ‘hota’ due to the differences in the Spanish language.

“It didn’t take long for colleagues to start calling for a certain ‘Diogo Jota‘,” Portuguese publication Expresso explained in 2016.

“After all, that’s what they read every time the kid started toward the area and his back was the only thing they could see.”

And why did he wear ‘Silva’ on his shirt at Wolves?

While he now wears ‘Diogo J.’ on the back of his shirt with both Liverpool and Portugal, he initially wore his surname ‘Silva’ with Wolves.

The Midlands club confirmed in 2017 that their new loan signing from Atletico Madrid would be required to ditch his nickname due to EFL regulations stipulating that only surnames must be worn.

Upon Wolves‘ promotion to the Premier League in 2018, however, he returned to ‘Diogo J.’, which has led Jota to the household name he enjoys today.