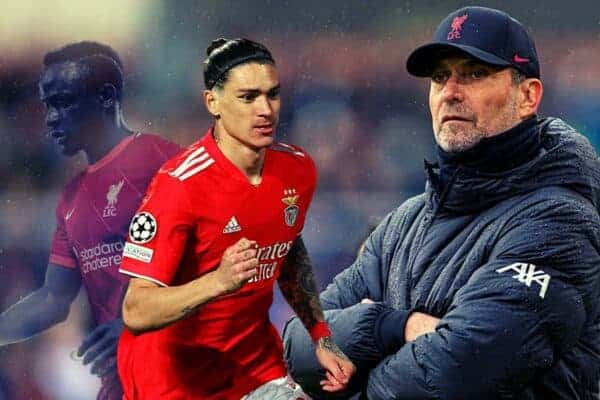 With Darwin Nunez coming in and Sadio Mane on the way out, another example of Jurgen Klopp‘s subtle and inevitable evolution is in play at Liverpool…

No football club can stand still and prosper for long.

The trick to creating the type of longer-term legacy that has fuelled Jurgen Klopp’s decision to extend his time at Anfield can only be pulled off by consistently seeing ahead of the curve, reading the patterns, and trying to predict the future.

Nobody wants to see the back of Sadio Mane, but if he has decided that enough is enough at Liverpool then you must respect his wishes.

Only Mane himself knows the reasons behind his desire to swap Merseyside for Munich, be they powered by the prospect of earning more elsewhere or it being a simple case of reaching a time in his career when he wants an easier life.

With an 18-team, 34-game Bundesliga that is all but guaranteed of being won by the time Christmas rolls into view, and one domestic cup, Bayern Munich’s focus going into the second half of their season tends to be absorbed by the Champions League.

Throw in a three or four-week winter break, and I can completely get why the Bundesliga looks so attractive to Mane.

It offers a wonderfully balanced footballing landscape that will make his biannual trips to Africa, for international tournament football with Senegal, much kinder on his mind, body and soul too.

In many respects, having served Liverpool for six years, Mane has completed two Klopp cycles, something that not many players have had the endurance to live with, especially during his time in charge of Borussia Dortmund, where he arguably broke some of his players to a degree.

There is a theory out there that football clubs operate in cycles of three years.

It is a bit like how you have sleep cycles of 45 minutes, and every three-quarters of an hour you reach a point of shallower sleep, where you are vaguely alert to the noises of the night, before drifting into deeper sleep once again – or alternatively, you find yourself awake at 4am and have no idea why.

What has unsettled many Liverpool supporters is that Mane’s will to leave has arisen while ambiguities linger over the future of Mohamed Salah too, also while Bobby Firmino has clearly fallen down Anfield’s attacking pecking order and Divock Origi sails off into the Serie A horizon for a well-deserved new adventure.

Part of this need for change is rooted in Liverpool’s strict wage structure, yet that is the same wage structure that has brought us to where we are as a football club, one which can enter the final two games of the season with the very real possibility of completing the quadruple, no matter how painful it was to ultimately fall short.

Driving back from the chaos of Paris, we had eventually drifted from the therapy of music to football discussion shows on the radio, where former professional footballers, who clearly aren’t habitual Liverpool observers, declared that Klopp needed to rebuild his team.

It was all complete nonsense, of course; much of what was being said was based on the assumption that Klopp had built a team that hadn’t been added to for the last three years.

Evolution in football is subtle rather than bludgeoning, and Bob Paisley was a master of the art. It was like you were sat with him at a table, where he had three upturned cups and one small ball.

Watch, as he shifts the cups around, keeping an eye on the cup you thought the ball was under, not only for you to guess wrongly at the end, but also that you didn’t even notice that he had replaced the cups with wine glasses.

From the 1974 FA Cup-winning team he inherited, by the time Paisley was delivering a league and UEFA Cup double two years later he had introduced Phil Neal, Jimmy Case and David Fairclough to the mix, along with Ray Kennedy who, as an extra trick, he had transformed from an inconsistent striker into a left-sided midfielder of silken vision and movement.

A further two years down the line, the European Cup was being retained at Wembley, with a team that boasted a new spine of Alan Hansen, Graeme Souness and Kenny Dalglish.

Across these years, from positions of seeming irreplaceability, Ray Clemence, Alec Lindsay, Tommy Smith, Emlyn Hughes, Peter Cormack, Brian Hall, Steve Heighway, Kevin Keegan, John Toshack and Ian Callaghan were all manoeuvred to the exit door, as were many of the players that Paisley replaced them with.

What Paisley had was an unerring knack of calling time on players who, in most cases, personally felt that they weren’t ready to leave, and who from a supporter’s point of view had been cut loose too soon, only for the Liverpool manager to be vindicated.

It’s difficult to point to a single transfer call that Paisley got wrong.

Klopp has undoubtedly studied how Paisley did this; Klopp is now spinning his own version of Paisley’s way.

Since we won the Premier League in 2019/20, we no longer call upon the services of Dejan Lovren, Georginio Wijnaldum, Xherdan Shaqiri and Adam Lallana.

Alex Oxlade-Chamberlain is likely to be on his way this summer, while Adrian remains but is unlikely to be called upon ever again. I’m sure others will be moving on too.

Among those to have picked up a Champions League winners’ medal just three years ago in Madrid, some of the names feel like they departed aeons ago. Simon Mignolet, Alberto Moreno, Daniel Sturridge and Rhian Brewster feel like they call to us from a far-more-distant past than 2019.

There were others who we fretted the loss of before the trophies began to tumble our way too. Philippe Coutinho and Emre Can live under this category.

It could be argued that, just like Paisley, Klopp has not got a significant transfer call wrong, be that in who has departed, nor in his recruitment policy, or even within the patience he has been willing to show in waiting for the right player.

Since we won the Premier League title in 2019/20, Klopp has brought in Thiago, Diogo Jota, Kostas Tsimikas, Ibrahima Konate, Luis Diaz and Fabio Carvalho. Darwin Nunez will be next.

Of these, only Thiago is over the age of 26. The future is bright, but only because we have a manager who is alert to the need for a consistently subtle change, a manager who believes in footballing evolution.

For Mane, and quite probably Salah beyond him 12 months from now, there will be a pain and sadness to be felt upon their departures, but new energy will take their places, because Klopp will already know who he wants to succeed them.