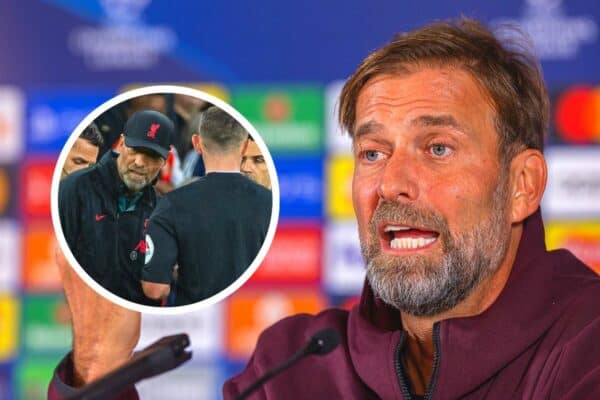 “It was obvious…” – Jurgen Klopp on the 3 big decisions ref got wrong vs. Arsenal

Jurgen Klopp has explained his disbelief at the three big decisions he believes referee Michael Oliver got wrong in Liverpool’s 3-2 defeat to Arsenal on Sunday.

The Reds twice came from behind to level the scores at the Emirates, only for a winning penalty from Bukayo Saka to see them leave north London empty handed.

On a Premier League weekend that saw a series of dubious refereeing decisions, Liverpool certainly didn’t get the rub of the green, and ahead of Wednesday’s Champions League clash with Rangers, Klopp was asked for his thoughts on the game two days on.

The German picked out three decisions he believe Oliver got wrong on the day.

Gabriel Martinelli opened the scoring for the home side within one minute of kickoff, but it’s since been revealed that the goal wasn’t checked for offside due to a VAR technical error.

Had the goal had been looked at by Darren England, the VAR on the day, there’s every chance it would have been disallowed, with Klopp adamant that Saka was coming back from an offside position in the build up.

“The first Arsenal goal, how I heard now, was pretty likely offside, we just cannot find out because the camera was not there or whatever, I don’t know exactly the reason,” he told reporters.

“But when I saw the picture I thought it was obvious that Saka came back from an offside position.”

Klopp also believes Liverpool should have had a penalty in the first half, when Diogo Jota‘s attempted cross struck the hand of Arsenal defender Gabriel.

The boss pointed out the view of former Premier League referee Dermot Gallagher on Sky Sports’ ‘ref watch’ feature, who agreed that the Reds were unfortunate to have not been awarded a spot kick in the first period.

“I think on Sky Sports, the ref watch, when Mr. Dermott twice says the decision was wrong from the best English referee Michael Oliver,” Klopp continued.

“One penalty was no penalty. Before the season we had the big referee meeting and they said ‘no soft penalties anymore’.

“Then, we saw the season already the kind of situations we had for handballs, and there were penalties with exactly the same situation, but not in this game.

“But Mr Dermott, not to forget, thought ‘yes, this is a penalty’.”

Arsenal‘s winner came after Thiago was judged to have brought down Gabriel Jesus in the box.

Oliver immediately pointed to the spot, and his decision wasn’t overruled by VAR. Klopp remains strong in his belief that it was the wrong decision.

“Second half, we score our second goal,” he continued.

“Open game, we’re not as good as we were in the first half, but open game. Then we concede a penalty that was not a penalty, and from that moment on we had to chase the game and Arsenal could counter-attack and they had obviously better situations, that’s all true, but it’s difficult to judge that game really.”

Liverpool could have defended a lot better against Arsenal, and Klopp said as much on Tuesday evening, but understandably, he feels it’s harsh to judge his side on a game where there were so many contentious decisions.

“That we don’t play our best football, I saw that,” he said.

“But we played away against the team first in the table. Great team, top players. But we lost it in the way we lost it and it’s difficult to judge.

“What do we miss? In this specific game, just the correct ref decisions would have been helpful to be honest, and then we can judge the game.

“If we win that game, for the outside world, our problems are completely sorted, we know it’s not like that. We lost the game and three players, that’s obviously exactly the opposite of what should have happened.”