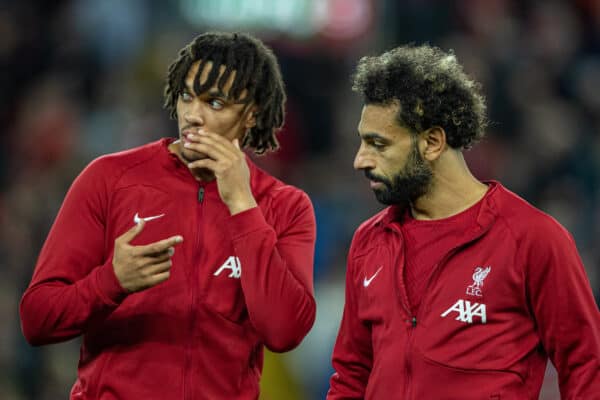 Liverpool were beaten 2-1 at home to Leeds on Saturday night, with the Reds devoid of quality from far too many players in yet another league defeat.

Alisson has been Liverpool’s best player this season and this was another assured showing from him.

He, unfortunately, slipped for Leeds‘ calamitous opening goal, but didn’t let the moment affect him and made a big save to deny Jack Harrison and was great with his hands all night.

A priceless footballer who is continually tasked with a lot more than he ought to be.

Alexander-Arnold was much improved against Leeds, even though he was lucky when Brenden Aaronson hit the bar, having switched off in the penalty area.

One outrageous pass should have led to Darwin Nunez putting Liverpool ahead before half-time and he was a threat down the right all evening.

Defending solidly in general, too.

This was a bad night at the office for Gomez, whose performances are far too hit-and-miss at the moment.

His wayward pass allowed Rodrigo to tap into an empty net early, after not even getting his head up to look out for danger, and he got worse from then on.

A lack of concentration and poor decision-making were on show throughout and you could sense the Anfield crowd growing restless and Leeds growing in confidence.

While Gomez was having a nightmare alongside him, Van Dijk was a, slightly, better performer for the Reds.

He let very little unruffle him, staying calm and not committing himself, and he was also a threat with his aerial presence in attack.

Did look less assured in the second half as Leeds grew in confidence, though, and was weak in the tackle for Crysencio Summerville’s late winner.

This was Robertson back to his best at Anfield, with the Scot producing surging runs and great quality with his left foot.

He had more energy in his legs than appeared to be the case pre-injury earlier in the season, and he also displayed his snide side after a tussle with Aaronson.

Excellent performance, making him the exception.

What on earth has happened to Liverpool’s ‘lighthouse’?

There was a time when he was as important as anyone, but he now looks like a weak link and his leggy, cumbersome side again came to the fore against Leeds.

Too many touches were heavy, he was walked past too often and his general influence was sorely lacking, despite him clearly trying his best.

Rightly substituted on the hour mark.

Thiago returned to the starting lineup after an injury absence and the positives outweighed the negatives at Anfield.

The Spaniard was typically elegant in possession, breaking the lines with his vision, although he did play some loose balls and was too eager in the tackle.

One big tackle on Harrison on the counter-attack was a key contribution but was part of a disjointed, one-paced midfield.

Facing the team he suffered that horror injury against last season, Elliott couldn’t get going all evening.

There were moments of class, including one superb first touch out wide when took down a long ball, but he lost possession in key areas a few times.

A timely reminder that he is still only 19 and very much a player learning his trade.

Deployed at the tip of Liverpool’s midfield diamond, Firmino was bright to begin with but became ineffective as the minutes ticked by.

The 31-year-old showed great link-up play with Nunez for one chance and he pressed well off the ball, and was denied twice by Illan Meslier late on.

Energy levels waned in the second half and was not at his best by some distance.

The Egyptian King was denied in the first minute after an audacious effort was cleared off the line, but he didn’t have to wait too long, burying a finish to make it 1-1.

He was otherwise quiet by his world-class standards, however, and was too selfish several times when an easy pass was on.

Needed to do more.

Nunez was partnered with Salah in a two-man strikeforce and he threw in a mix of good and bad against the Whites.

His rawness was on show, from sloppy passes to missed chances, but he also worked hard off the ball and tried to make things happen, almost scoring a brilliant curled winner.

Still a work in progress.

Added some legs and drive, but also didn’t do enough when he had the ball.

Did more than Fabinho, but a Dejan Lovren-esque shot in the dying seconds was abysmal.

Why did he replace Trent? Strange call by Jurgen Klopp.

This was another big night for Klopp, who will have been hoping for some momentum after the midweek win away to Ajax.

Again, it was another massive step in the wrong direction, though.

He again went with the 4-4-2 diamond formation, but the performance lacked cohesion and intensity – something we have seen so often this season.

Klopp must be wondering what on earth is going on, but that’s not to say he shouldn’t shoulder some of the blame for the same performances and some odd substitutions.