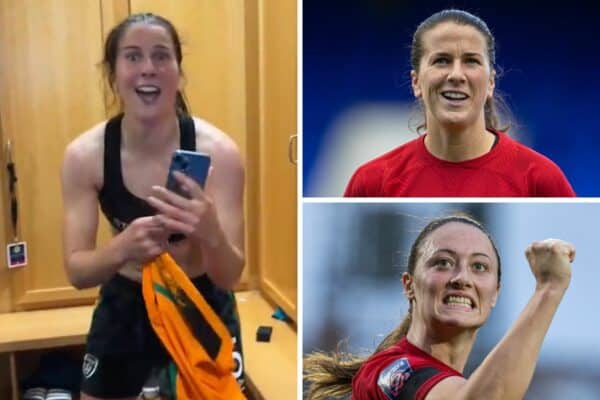 Two of Liverpool Women’s key players, including their club captain, made history by helping their country qualify for their first World Cup on Tuesday evening.

Both Niamh Fahey and Megan Campbell played the full 90 minutes as Republic of Ireland beat Scotland 1-0 in their World Cup play-off final at Hampden Park.

The victory means both players are set to feature in next year’s tournament, which will be held in Australia and New Zealand in July-August 2023.

Reds striker Leanne Kiernan is also an Ireland international but was not involved on Tuesday, as she continues to recover from an ankle injury she sustained in the season opener against Chelsea.

There were jubilant scenes on the pitch and in the dressing room at full-time, with both Campbell and Fahey posting images and footage of the celebrations on social media.

A lifelong Liverpool supporter, captain Fahey has been a key player for club and country since joining the Reds from Bordeaux in 2019.

After five years at Man City, defender Campbell arrived at Liverpool in June 2021. She has represented Ireland from a young age and now has over 40 international caps to her name.

The 29-year-old has also developed an impressive long throw-in ability, which she used to Ireland’s advantage on numerous occasions in Tuesday’s victory.

Liverpool goalkeeper Eartha Cummings was an unused substitute for Scotland, who have missed out on the opportunity to qualify for next year’s tournament.

Elsewhere, despite putting her side in front in the first half, Rhiannon Roberts’ Wales failed to qualify after being beaten 2-1 by Switzerland. Fellow Liverpool team-mate Ceri Holland also featured.

Aside from the Irish trio, Shanice van de Sanden is the other Liverpool player to have already qualified for the tournament with Netherlands.

Next year’s ninth edition of the Women’s World Cup has been expanded to include 32 teams, an increase of eight teams from the previous tournament in 2019.

Ireland, the 41st different nation to qualify for the finals, will be the fifth team making their World Cup debuts along with Morocco, Philippines, Vietnam and Zambia.