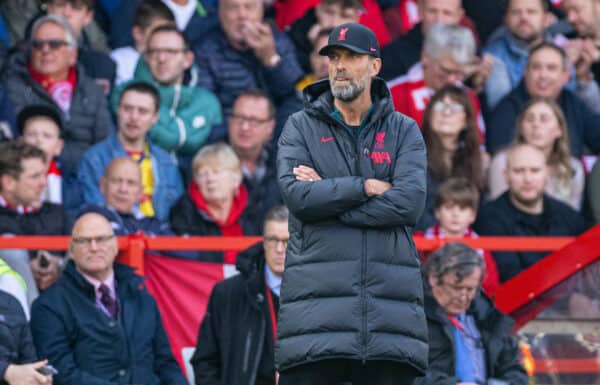 Liverpool failed to keep consistency or win a third straight league match for the first time this season, losing 1-0 at Nottingham Forest thanks to a former player.

A paucity of options

Thiago ill, Darwin Nunez with muscle soreness. The choices available to Jurgen Klopp continue to reduce, even as other squad options start to return.

The problem is, when a (previously) fully fit player individual is suddenly out, they’re not really replaced by someone coming back: it takes games to reach peak fitness, it takes match involvement to recapture rhythm.

That’s even without considering the quality or positions that players play – so Alex Oxlade-Chamberlain coming back is a positive, but he doesn’t fill what Darwin or Jota or Thiago has been doing because he’s still weeks, or months, behind.

Truth be told, Liverpool didn’t start this with a top-four quality midfield. Some of these young starlets might go on to be great players, internationals, but right now it’s not the case.

Fabinho out of form, Jones out of position and a first start of the season, a new young signing in Carvalho, and Elliott, who in fairness is now a first-team player.

The poor start to the game and build-up play can be in large part attributed to this.

Curtis returns but not as we knew him

A ten as a kid, a left-sided forward when breaking through, a No8 eventually in a three-man midfield – and now part of a double pivot.

It has been quite the regression down the pitch for what started out as an offensive-minded, creative outlet.

If Jones has played centre-mid in a two before at senior level it can only have been for a few minutes.

There were aspects of his game which suited it on the day: the Reds had loads of the ball and he was in possession in deep areas, lots of space, able to turn away from challenges as he likes to and push us further upfield.

Defensively though it was never going to be ideal and especially when he was often (surprisingly) sat behind Fabinho, who was entirely ineffective once more.

Fair play to Jones for sticking out the length of time on the pitch he did, while also switching to a more attacking role later on.

Elliott shines, others do not

Bad as the day was, it’s remiss to not pick out anybody at all for a good performance – after all, it won’t take too long.

Harvey Elliott was one of few who could reasonably say they were impressive on the ball, stuck to their tactical role and did enough defensively to contribute to the team in a big way.

At the other end of the scale, we’ve mentioned Fabinho above so won’t go on about him here, but he was again off the pace both off the ball and didn’t get the chance to be progressive enough on it because Forest packed the middle.

It was dreadful start to finish from the No2, poor passing to start with and twice causing massive problems for himself, one of which led to Awoniyi’s goal.

Salah was a non-event after his first-half knock, Carvalho doesn’t have the decision-making or on-ball consistency to be part of the regular XI yet and Firmino was at best hot and cold on the ball.

A dismal day out.

Yates knows, and said as much late in the game after Alisson denied him – there’s much about our goalkeeper which is unbelievable.

First, his capacity for consistency is exactly that. Secondly so are some of the saves he keeps having to make, most of all that late one-on-one black.

It’s also unbelievable that we’ve had to use him as often as we have this season just to keep us in matches.

And that we haven’t come up with a better way to protect him.

And that the pairing in front of him has been so changeable again this season, both in form and in faces.

It’s unbelievable that we have to keep pointing out how well we’ve needed Ali to be playing, and equally so that we just cannot rely on others to do the same week after week.

A job to do

Clearly, the corner we need to turn is a longer one than we thought and we’re very much not there yet.

But there’s no time to linger as around the corner is another mammoth task, a Champions League game we need a result in.

Draw at Ajax and we’re through to the last 16, giving us both a free hit in matchweek six and time to really get into a better groove before the knock-outs start in 2023.

Hopefully a couple of Spanish-speaking individuals in particular will be back for that match, but regardless of who plays it needs to be much better on the ball, much quicker, much more inventive in the final third – which partly will be down to the personnel on the pitch of course.

This was, all told, a horror of a match and it needs to be put in the past very quickly.

Consistency comes one game at a time and this was not it, so back to the beginning.