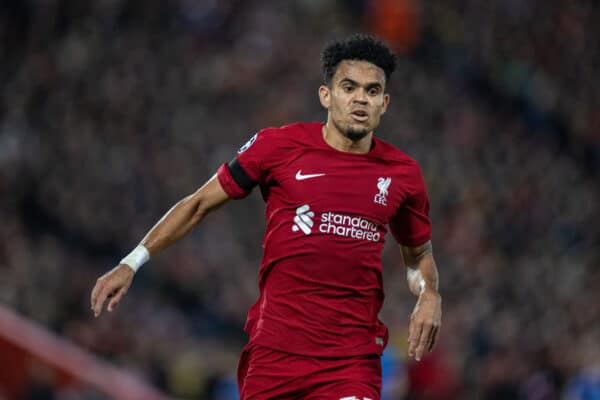 Luis Diaz has made a big step in his recovery from a long-term injury, but there are still doubts over Naby Keita and Joel Matip before the World Cup.

Diaz has been out since the 3-2 loss at Arsenal a month ago, and more recently returned to Colombia to visit family and continue his rehabilitation.

The winger is not due back in action until after the World Cup break, but providing an update on his recovery, Pepijn Lijnders gave a big indication that he will be available for the warmup friendlies in Dubai.

The assistant manager, speaking to LiverpoolFC.com, revealed that Diaz will resume light training outdoors this week.

“Luis Diaz is running for the first time on Thursday,” Lijnders said.

“That’s good news because we all know how important he was last year and in the second half of the season.”

Liverpool are expected to take on AC Milan and Lyon in two friendlies next month, with their first competitive fixture back coming either on December 20/21 in the Carabao Cup fourth round or at Aston Villa on Boxing Day.

It stands to reason that, with a month-and-a-half until then, Diaz could be fit and ready when the campaign restarts.

Diogo Jota, meanwhile, is facing a longer period out with a serious calf injury, while Lijnders suggested that both Joel Matip and Naby Keita could miss the final games before the break.

On Matip, the Dutchman added: “[He] is getting closer to team training but will not make Southampton probably.”

Liverpool take on Derby in the third round of the Carabao Cup on Wednesday night, and will also be without James Milner who remains out after a head injury.

“Millie will definitely be ready for Southampton but this game comes too early,” Lijnders said.

Jurgen Klopp is set to make a raft of changes against the League One side, with Caoimhin Kelleher already confirmed to start and Stefan Bajcetic, Calvin Ramsay and Fabio Carvalho all named as possibilities.