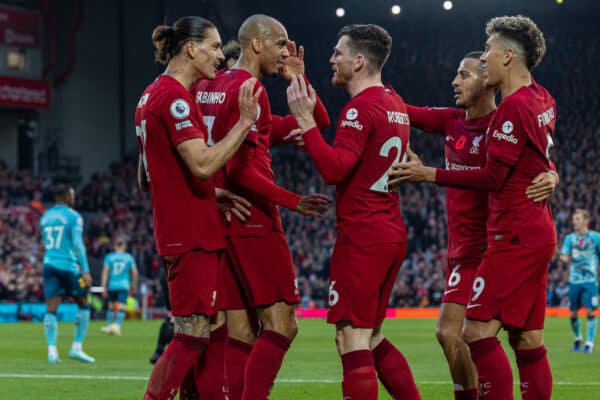 Liverpool returned to winning ways at Anfield with a comprehensive 3-1 win over Southampton, to push back towards the top six before Christmas.

Nunez gets into gear

A massive crowd favourite already, that much is clear.

Every time Darwin Nunez gets the ball the upturn in crowd volume is apparent, and he’s frequently serenaded for achieving the most minor successes.

When he does produce genuinely exciting moments, that acclaim from the Kop gets even louder – and they are coming with ever-greater frequency now.

Playing down the left for now, it’s clear we’re going to see even more from our Uruguayan once he’s regularly through the centre, but he’s playing with incredible gusto and decisiveness from the flank too.

Two goals on the day take him to nine for the season, one a brilliantly taken volley and the other the result of great anticipation and determination.

Equally effective were his blockbuster ball carries down the left; the term ‘dribbling’ feels too refined for Darwin’s style, which is part battering ram and part juggernaut.

Either way, he’s tough to stop once he gains momentum.

It was Bobby Firmino who got the ball rolling, though, and after his struggles to score at Anfield last term, it’s now six in the seven league encounters on home soil for him.

Elliott highlights his importance to a winning team

One of the best performers in a fast-paced first 45 minutes was right-sided No. 8 Harvey Elliott.

The youngster was performing well earlier in the season even when results were dismal, in fairness, but his off-the-ball work, defensive awareness and positional play naturally still have a way to go.

All as you’d expect for a player who is still only 19, don’t forget.

While it’s hard to accommodate that type of inexperience in a team which isn’t performing well, perhaps, this was a good example of why he is so valuable to a team which is winning and thriving.

His ball manipulation, ability to find space in the final third and make the right decision as to which team-mate to find is constantly of a high calibre, with the execution to match.

Elliott’s delivery for Darwin’s first was a beauty and some of his middle-third link play has been exceptional.

A deserved ovation when subbed off.

Reds recognisable after a season of struggle

Whisper it, but this looked quite like Liverpool Football Club.

Decent buildup down the flanks, powerful running in behind the defence, a clinical edge and plenty of chance creation in open play – and, yes, even a goalkeeper making some crucial saves after periods of inactivity.

This wasn’t Liverpool at their best, let’s not get carried away, but it was recognisable. It was our game plan, our blueprint.

It looked like a sustainable way of playing and winning.

After months of uncertainty and tactical shuffling, a dearth of energy and dismal results, this was a good step back to what we hope to see on a much more consistent basis after Christmas.

Theories on a postcard as to what has sparked the resurgence.

The unfailing awesomeness of Alisson Becker

Bearded or not, how can you not love this man?

Alisson Becker is a majestic being, always in charge of his emotions no matter if barking instructions, making saves or deciding in a split-second exactly where a forward is planning to put a one-on-one.

He might even have been Man of the Match in the eyes of some, despite the scoreline being comfortably in the attack’s favour.

Two big one-on-one stops in the second half came within a couple of minutes of each other but after at least 20 minutes of him not really being involved at all.

Both times he spread himself in the right direction to thwart an attempted dink – then his full-length sprawling claw-away to deny Che Adams a headed second was nothing short of world class.

Elite. Might just win the World Cup on his own.

Work to do but reason for cautious optmism

So it’s into the top six for the Reds, at least for now, but still a significant gap between ourselves and fourth.

That’s the overriding objective for the remainder of this season for sure, finding a way to get back into the Champions League spots.

Of course, we’ll be aiming to beat Real Madrid too and continue that journey, but realistically that’s only going to happen if the Reds are in consistent, impressive form – which comes in league play.

Relentlessness has to be the watchword of 2023.

We still haven’t won three league games in a row and the first chance to rectify that will come on Boxing Day – after, of course, our Carabao Cup fourth round clash with Man City.

We’re holders, so want to beat them for all sorts of reasons, but that game will effectively be a re-tuneup for those not at the World Cup or exiting early.

A decent step forward in our last game before the break – now good luck to all those Reds headed to the finals!