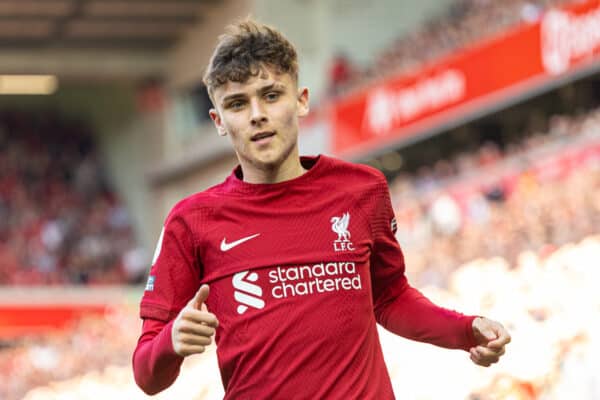 Bobby Clark was one of the young Liverpool players to have caught the eye in Dubai, and the club may soon be fielding loan offers for the 17-year-old.

Clark was a prominent feature as the Reds took on Lyon and AC Milan in two friendlies this month, clocking 57 minutes on the pitch.

Coming on for the closing stages of Friday’s meeting with Milan in Dubai, the teenager laid on a sumptuous assist for Darwin Nunez to make it 4-1, leading to praise from Jurgen Klopp.

There is a chance the former Newcastle youth is included when Liverpool take on Man City in the Carabao Cup fourth round, while potential suitors watch on.

According to Chronicle Live‘s Lee Ryder, in an article focusing on Clark’s switch from Tyneside in 2021, there are “clubs eager to sign him on loan when the January window opens for business.”

Preston, who sit sixth in the Championship and are managed by ex-Liverpool youngster Ryan Lowe, are named as one of the sides “keeping an eye.”

However, it is maintained that Clark is “likely to stay” at Anfield, rather than head out to the Football League to gain further experience.

It would be no surprise if Liverpool were to receive offers for their No. 42 next month, given he has been fast-tracked into Klopp’s first-team setup.

But a move to the upper reaches of the Championship may be seen as too big a step for a player who is still a regular starter for the under-21s.

Liverpool currently have 17 players out on loan, and while some of those have proved a success – such as Tyler Morton, Conor Bradley and James Balagizi – others have struggled and seen their progress halted.

Owen Beck was seen as one of the top talents in the academy after a standout campaign last time out, but has so far failed to establish himself at Bolton.

The same can be said for Billy Koumetio, who is currently back training on Merseyside during the winter break having fallen out of favour with Austria Wien.

Koumetio, at the very least, could be under consideration for an early return in January.

If Clark were allowed to head out on loan, which could be seen as a logical progression for a hugely promising attacker, there would need to be assurances over his role.