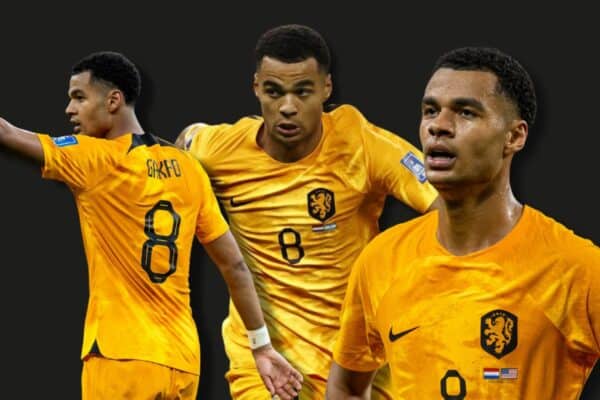 Liverpool are set to make Dutch forward Cody Gakpo their first addition of 2023, after the Reds moved to sign the PSV attacker quickly after Christmas. So what will he bring and what should fans expect?

Jurgen Klopp is fairly renowned at this point for not just launching new signings straight into the starting line-up, with only a handful of select players excluded from that process.

Virgil van Dijk was one, of course, and Alisson Becker another. A more rare occurrence in attack saw Luis Diaz almost immediately an immovable part of the furniture on account of his fast impact, but few others have bucked that trend.

Cody Gakpo might well prove to be another – albeit because of a different reason: necessity.

With Diaz, Diogo Jota and Roberto Firmino sidelined, as well as potential stand-in options like Curtis Jones being absent, Gakpo may get a quickfire route into the team simply on account of availability and familiarity with the role the Reds need someone for.

As such, a plug-and-play option on the left is far from the worst late Christmas present supporters could have received.

A familiar pattern of play

A tall, imposing presence, fleet of foot, right-footed and left-sided, touchline-tight and running in from out.

No, we haven’t re-signed Sadio Mane and no, we’re not talking about Diaz. But it’s indicative that the ‘style’ of player Liverpool – or Klopp – wants to have on that side of the attack hasn’t changed in the slightest.

Just as Darwin phasing in for Firmino isn’t a like-for-like despite some overlap, nor would this move be if Gakpo supplanted Diaz – which isn’t entirely likely right now, fitness aside.

The Dutchman is far more about smooth acceleration towards top speed, rather than the instantly friction-inducing, raw burn of Diaz’s initial strides. He is much quicker-footed with his close control around a player than Mane initially was, yet also has less inclination to attack aerial balls than the Senegalese.

Perhaps Gakpo is, right now, lacking some of the aggression and in-your-face nature of both Mane and Diaz, but he is also a better both-foot finisher than either.

And yet, when it comes right down to what he’ll offer in his first minutes, first matches, it’s more of the same: great capacity to cut infield, link play and get shots away.

The October goals are insane ?#PSVxPUMA

Some very recognisable traits of Gakpo’s will be immediately relatable, including his constant attempt to start slightly narrow, then drift off the shoulder of the full-back to gain a few metres of space nearer the touchline and receive a big switched, diagonal pass.

Once he then has control and room to size up his marker, it’s phase two: beat him and get beyond him. Gakpo has individual skill, but doesn’t always bother with it. Why would he, when he’s quicker than the defender anyway? Give-and-go is a sure-fire recipe for success when you know you’re getting the return off a team-mate, having proven your composure in front of goal.

He does ‘the Diaz’, too: run across the edge of the box past two, three, even four if necessary, until that angle opens up to lash one top bins.

Add in a quick shift-and-push away from a defender at the beginning of his dribbles from deep, his great first touch to take play away from a marker and his willingness to clip in curling crosses from the left instead of always shooting and there are lots of aspects of his in-possession game which won’t need too much adaption to Liverpool’s build-up approach.

That all assumes he plays from the left, naturally, which seems the most likely route to begin with. But just about every attacker Klopp has dealt with has, in one way or another, had his game changed along the way.

And for fans who don’t typically watch Eredivisie matches, their view of Gakpo will naturally be coloured (orange) by his World Cup performances, where he was the attacking star in the side led by Virgil van Dijk.

That’s not problematic, but does need some context.

Club vs country changes meant a more pedestrian build-up for Gakpo’s team under Louis van Gaal in Qatar, and a lot more moving around to find a position to receive play in while his defensive team-mates stymied the opposition, as opposed to actively involving himself in those phases.

PSV average 18 shots per game in the Dutch top flight this season; Netherlands at the World Cup averaged eight. It was a more passive approach than a top domestic team would usually employ, and Gakpo’s time and area on the ball was altered accordingly.

His actual position was also changed, playing more centrally – as a No.10 and a No.9 at different times. Partly that’s systemic, with the Dutch utilising wing-backs and no wide forwards, but it’s also a switch which makes use of his ability to dribble through spaces centrally, his comfort receiving the ball surrounded by players and the speed he has to join up in the attack.

That was on show this season for his club too against Zurich, for example, a game where he played from the left but was able to lead the counter right through the heart of the (admittedly poor) opposition for his first of two goals on the night.

All this is just to point out he can fill more than one role, but also to showcase that his Netherlands performances don’t tell the full story in terms of speed of play, constant impact across the 90 minutes and how he contributes to the attack.

As a 23-year-old forward, he naturally has honed a lot of his on-the-ball attributes by this point and may not necessarily gain huge volumes more technical ability.

But Klopp and the coaches will doubtless be looking for more in other areas.

When and where to press – and how forcefully – are natural adaptations for most players Liverpool sign, and Gakpo won’t be different there.

His speed, more than power, will probably be something they look to make the most of in terms of closing out passing lanes and repositioning after transitions of play, rather than actively closing down and making tackles. He already does this, and well, but a step up is required.

The other notable aspect of his game which probably needs tweaking is a familiar one for the Eredivisie’s top attacking talents: a propensity to hold onto the ball too long, doubtless born of being better than every defender they face.

Moving the ball quickly and deciding which action is best is a key improvement for Gakpo to work on, and a few early frustrations in ironing out this trait can be expected.

There’s a real gem of a player to work with, slightly different to those who have come before him, slightly the same as them as well, and another part of Liverpool’s renewal of the team who can play right across the attacking line from the get-go.