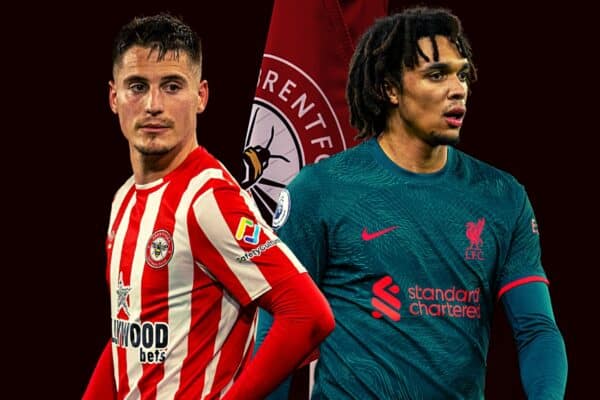 Liverpool’s first match of 2023 is a potentially taxing trip to Brentford, as the Reds aim to continue their resurgence.

After a poor start to the season, Jurgen Klopp‘s side are showing real signs of life, having picked up four league wins in a row.

On Monday night, Liverpool head to west London to take on a Brentford side still more than holding their own in the top flight.

Here’s all you need to know ahead of the match.

Another year is done and dusted and Liverpool are now ready to embark on another relentless 12 months of action.

Monday’s clash is their first outing of 2023 and three points away to a talented Brentford side would be a promising start to the year.

There is so much to play for in the coming months, with a top-four finish clearly taking precedence, in what could be a tussle until the final day.

There is also the small matter of a seventh European Cup on offer, too, as a mouthwatering showdown with Real Madrid approaches.

A second FA Cup triumph in a row would also be an added bonus, as Klopp looks to continue racking up trophies at Anfield.

When Brentford were promoted to the Premier League in 2021, some lazily expected them to make a swift return to the Championship.

The Bees have impressed greatly under Thomas Frank, though, playing a high-octane style of football and pulling comfortably clear of relegation in both 2021/22 and this season to date.

The Gtech Community Stadium has become a tough ground to visit, as Liverpool found out during a 3-3 draw last season.

In Ivan Toney and Bryan Mbeumo, the west Londoners have a dangerous attacking pairing, while the likes of David Raya, Rico Henry and Mathias Jensen are key figures, too.

In true Liverpool fashion last week, they went from being strongly linked with Cody Gakpo to signing him in just a matter of hours.

The Dutchman comes in as a big-money signing with a big future and it could be that he makes his debut against Brentford.

It all depends on whether he receives clearance in time, including his work permit.

If he does, a start would be a surprise, with Klopp likely to ease him into his new surroundings, but a cameo from the substitutes’ bench may be on the cards.

If he can enjoy a similar impact to Luis Diaz this time last year, Liverpool will have another hero on their hands.

Unfortunately, Liverpool’s injury woes are showing few signs of going away, with two fresh issues to contend with.

Both Andy Robertson and Harvey Elliott were forced off in the win over Leicester and it remains to be seen whether they are available for Monday’s match.

James Milner, Curtis Jones and Roberto Firmino could be in the squad, though, acting as a big boost.

Meanwhile, Diaz and Diogo Jota remain long-term absentees, with neither expected to return in the near future.

Klopp will no doubt be keen to keep rotating during a busy period, so it could be that a few tweaks are made to his starting lineup.

Thiago has started all three games since the World Cup and it could make sense to give him a breather, with Fabinho replacing him after the birth of his son.

Meanwhile, Ibrahima Konate could come in for Joel Matip, with his physicality arguably more suited to playing Brentford, and Kostas Tsimikas may deputise for Robertson.

This is the third time that Liverpool and Brentford will meet in the Premier League, with the Reds currently unbeaten against them.

Last season, a 3-3 thriller was played in London, before Klopp’s side ran out comfortable 3-0 winners last January.

Fabinho, Oxlade-Chamberlain and Takumi Minamino were an eclectic mix of goalscorers in the latter – a game that signalled the start of a 10-match winning run in the league.

In fact, you have to go all the way back to 1938 for the last time Brentford tasted victory over Liverpool, meaning the Reds are nine games – and 85 years – unbeaten in this fixture.

Previewing this match straight after the Leicester game, Klopp explained that the club are eager to have a squad with “two teams of the same level” to live with the increasing player demands – but that isn’t to say the club can “just spend”:

“With the games we will have in the next years, the games will not get less. We will have more games and all these kinds of things.

“So it’s clear that you need real quality in all positions, and probably two teams on the same level, if you want, so that you can rotate and these kinds of things.

“That’s what we try to prepare, obviously.

“But that somebody’s surprised when I say we will not now start ‘splashing the cash’ – we never did it and I know it anyway. That should be really clear.

“Again, if there is something we can do – and that was always the case – and that means right player and financial situation, we will do it. And if not, then not.”

Assuming Darwin Nunez starts against Brentford, it will be his 22nd appearance for Liverpool since joining from Benfica last summer.

Much has been made of apparent profligacy in front of goal, but his record is superior to Luis Suarez’s was at Anfield at the same point.

The legendary Uruguayan only scored eight times in his first 21 matches for Liverpool, whereas Nunez has nine to his name to date.

It goes to show how harsh the criticism of the 23-year-old has been and that patience is required, considering Suarez went on to become a true great at Anfield.

Stuart Attwell will referee Liverpool’s first match of 2023, with the 40-year-old someone with a mixed record in charge of Reds games.

Klopp’s men have a 100 percent record under him this season, winning 9-0 at home to Bournemouth and edging to a 1-0 triumph over West Ham in October.

Attwell was, however, the referee for last season’s 3-3 draw at Brentford – here’s hoping history doesn’t repeat itself on Monday.

Brentford vs. Liverpool is live on Sky Sports Premier League, with coverage getting underway at 5pm (GMT) and kickoff at 5.30pm.

This Is Anfield’s matchday live blog will also be in full swing, however, as Sam Millne provides minute-by-minute updates from 4.45pm.