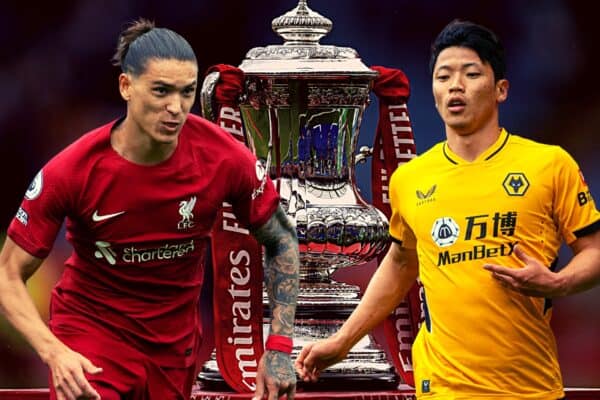 10 key things to know ahead of Liverpool vs. Wolves – as FA Cup defence begins

No team has retained the FA Cup since Arsenal in 2015. Aiming to change that, Liverpool begin their road to Wembley at home to Wolves in the third round.

However, a good performance at home, with youngsters impressing, could be enough to reinspire some of the positivity eminent immediately following the World Cup.

Here’s all you need to know ahead of Liverpool vs. Wolves.

It’s the first time Liverpool have entered the FA Cup as holders since 2007.

On that occasion, the Reds fell at the first hurdle, losing 3-1 to Arsenal at home in the third round.

Having been knocked out of the Carabao Cup by Man City, and with the league title seemingly out of reach, the FA Cup represents one of just two chances left for silverware this season.

The competition provided some fantastic moments last season, and in a campaign mostly devoid of joyous moments so far, the supporters need something to celebrate.

New Wolves manager Julen Lopetegui is getting used to the congested January schedule in England, and is unhappy that Liverpool will have had two extra recovery days than his Wolves team.

“I don’t understand how we play in one competition with two days less [recovery] than the opponent,” he told reporters this week.

In theory, this should be an advantage for the Reds as the team will have had two more days to rest and prepare for the opposition.

The Reds suffered a blow with the news that Virgil van Dijk will spend time on the sidelines, after coming off at half-time on Monday with a hamstring problem.

Jurgen Klopp has said that he could be out for “more than a month.”

On a more positive note, Jordan Henderson has recovered from the concussion that kept him out against Brentford – however, Roberto Firmino won’t be involved.

Diogo Jota, Luis Diaz and Arthur remain out injured, while there are doubts over James Milner and Naby Keita.

New signing Cody Gakpo could well be in line for a start given Liverpool’s injury problems in attack.

Alex Oxlade-Chamberlain and Fabio Carvalho have been filling in on the left wing, but Gakpo’s abilities suit the position better and Klopp has spoken about how well the Dutch international is settling.

The manager said: “Cody has been in for two full training days and is a joy to watch, to be honest.

“In our situation, it’s really nice to have a player who is pretty natural in a lot of things and knows where the goal is.

“He is obviously full of joy and enjoying each second at the moment.”

5. No need to rotate

Liverpool are in the middle of an unusually quiet couple of weeks for January.

There will have been five days since the Brentford match come kickoff at Anfield and Liverpool aren’t in action again for a week.

At his press conference, Klopp spoke about how Monday’s defeat hasn’t affected his team selection for this fixture. He said:

“If you play Wednesday, Saturday, Tuesday then you have to think about it.

“But we played Monday, then Saturday and Saturday.

“It’s clear we will line up as good and strong and experienced as we can. There will not be rotation because of the competition.”

With Champions League qualification essential to the club’s transfer strategy, though, some of Liverpool’s key figures could be rested for this FA Cup fixture.

Untarnished by the Reds’ poor start to the season, Ben Doak and Bobby Clark were the two academy players who impressed most in the Dubai mid-season friendlies, and could be rewarded with involvement on Saturday.

Curtis Jones and Fabio Carvalho are also likely to play a part with the former getting his first minutes since November on Monday.

Jones has only played 276 minutes all season due to recurring injury problems.

Klopp needs to balance rotation with the need to get back to winning ways.

While he will want to rest some key names ahead of a crucial run of fixtures – including Chelsea, Everton, Newcastle and Real Madrid – Liverpool need to build some momentum and give the supporters cause for optimism.

With plenty of young fans in the crowd, a good performance against Wolves could bring back some of the positivity felt before the Brentford defeat.

FA Cup third-round weekend is a four-day event now, and with 32 ties taking place, there’s a good chance you won’t be playing at the traditional time of 3pm on Saturday.

Liverpool have been given the 8pm slot on Saturday night this time around.

Anfield is always a pleasure under the lights but it’s not ideal for travelling supporters, especially given the ongoing RMT rail workers’ strike action.

9. Madley in the middle

While Mike Dean is on lead VAR duties, Andy Madley is set to referee on Saturday night.

It will be the fourth time this season that the 39-year-old has taken charge of a Reds game, with the most recent occasion coming in November when Liverpool won at Tottenham, one of the team’s better performances so far this campaign.

In the three games officiated by Madley this season, he’s only had to show one yellow card to a Liverpool player – Trent Alexander-Arnold against Brighton.

Liverpool vs. Wolves is live on ITV4, one of eight third-round ties broadcast on television this weekend.

If you can’t watch or get to the match, Henry Jackson will be live with all the updates on This Is Anfield’s live blog from 7.15pm.