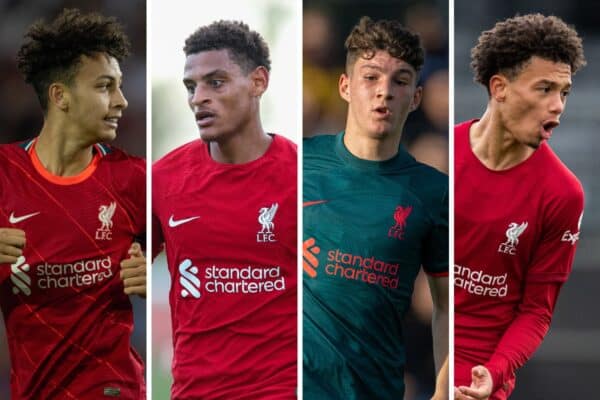 10 Liverpool academy players to watch in 2023 – including Kaide Gordon

With the second half of the season now underway, we take a look at 10 Liverpool academy players to look out for in 2023, including Kaide Gordon.

The Reds have resumed duties following a pause for the World Cup, which for some of the club’s youngsters made for almost two months out of action.

Barry Lewtas and Marc Bridge-Wilkinson are back to lead the under-21s and under-18s into 2023, while the under-19s will get back underway in the UEFA Youth League in February.

Back in August, we cast our eye over 10 academy players to keep an eye on throughout 2022/23, with the likes of Stefan Bajcetic, Ben Doak and Bobby Clark all making their mark.

So who else should supporters look out for in the second half of the season?

Here are 10 standouts, with Bajcetic, Doak and Clark left out along with two others to have made their breakthrough in Harvey Davies and Luke Chambers.

It has been almost a year since Gordon burst to the fore with an effort against Shrewsbury that made him the second-youngest goalscorer in Liverpool history.

Since then, it has been an unrelenting, frustrating period for a youngster plagued with injuries, but the £3 million signing from Derby is now nearing a return.

That is likely to begin with the U21s, rather than the first team, though it is worth acknowledging that, having only turned 18 in October, Gordon is still technically eligible for the U18s.

He will be looking to make up for lost time, and though patience is required, it cannot be forgotten how talented a player he is.

German youth international Frauendorf has been on the fringes of the first team this season, but still finds himself just outside of that group closest to a breakthrough of Doak, Clark and Bajcetic.

He is taking the opportunities in his stride, though, and has paired his exposure at senior level with an impressive run of form with the U21s and the U19s in Europe.

Typically deployed as either a winger or a midfielder, Frauendorf’s relentless work rate and ability to glide across the pitch make him a very watchable player.

Hopefully, he can translate that to the first-team stage in time, and there is still plenty of that.

Part of Liverpool’s pre-season squad along with fellow full-back Chambers, Mabaya would likely have been given the chance to make his competitive debut were it not for an ill-timed injury.

Three months out with an ankle problem saw him miss the Carabao Cup clash with Derby and the Champions League trip to Rangers, with Trent Alexander-Arnold out for both and Calvin Ramsay also missing for the latter.

But the hard-running full-back, who can also be used in midfield, is set to return upon the campaign’s restart and should resume first-choice duties with the U21s.

That should give him more chance to impress those watching on.

While Jarell Quansah got the nod to join the first team for the meeting with Derby and the mid-season training camp in Dubai, his centre-back partner should not be overlooked.

Younger, less established and less physically imposing than Quansah, Jonas is stylistically similar to Joe Gomez as the left-sided centre-back.

His recovery pace is a valuable asset, while he is aggressive in the challenge and comfortable in possession, though a rash red card in the U19s’ 4-3 win at Rangers in October showed his rough edges.

If Quansah departs on loan in January, it could be a platform for Jonas to step up as a leader at the back.

Cannonier’s season has been consistent with Liverpool’s as a whole so far: a blaze of glory, then a frustrating injury setback.

Stepping up as first-choice striker for the U19s and a useful option for the U21s, the youngster previously famous as a ball boy made a clinical mark in front of goal.

Throughout the group stage of the UEFA Youth League, Cannonier struck seven times in just four games, and overall, his record stands at 11 appearances, with five starts, and nine goals.

With a return imminent, Cannonier can hopefully look for a consistent run in the side and claim the starting berth his own at U21s level.

Injuries to both Cannonier and Layton Stewart dealt U21s manager Lewtas a difficult hand in the final weeks of 2022, but it also gave an opportunity for others to step up.

That handed Koumas a chance that would unlikely have been afforded to him at this stage in his development, including a start against League Two side Rochdale in the Papa John’s Trophy, alongside Bajcetic and Arthur.

There was also a first U21s goal against Dinamo Zagreb in November, but the 17-year-old is likely to settle back into the U18s setup when fitness issues ease.

It should not be overlooked that this is Koumas’ first season as a striker, and that across all age groups this season he has already scored 11 goals and assisted another four in 16 outings.

Just like Koumas shifting up to the U21s, an absence of more senior options has set the stage for another second-generation youngster to make an impact with the U18s.

Danns, son of former Premier League midfielder Neil Danns, has begun to hit his stride as a striker under Bridge-Wilkinson, with goals against Stoke in the league and Bournemouth in the FA Youth Cup.

He is still, unsurprisingly, a work in progress, having been converted from a deeper role to operate as a No. 9, and coaches will be urging him to keep his head up whenever possible.

But ahead of his 17th birthday later in January, there is clear potential in Danns as one to watch.

After a slow start, young full-back Gyimah has grown in confidence and found his feet as a regular starter for the U18s, benefiting from an injury to the highly rated Calum Scanlon.

An erratic but dangerous option on the left flank, the 16-year-old’s end product improved significantly over the first half of the season, while he is also a committed defender.

With Scanlon picking up another injury just before the World Cup break, there could be more scope for Gyimah to carve out his niche under Bridge-Wilkinson.

With the likes of Doak and Koumas moving up the age groups, there has been an increase in game time for the versatile Young as part of the U18s ranks.

The first-year scholar has been relied upon in a number of roles, including in midfield, but is arguably at his best on the right wing, where he can cut inside and take players on.

He will be targeting more goals in the second half of the season, having only found the back of the net once so far along with five assists, and he should make the right-sided spot his own.

After a slow start as he refound his fitness, Laffey has begun to settle into his commanding role as a midfielder in the mould of Leighton Clarkson and Dominic Corness before him.

A productive passer who can bite into challenges in front of the defence, the teenager will look to serve as the backbone of the U18s midfield alongside the likes of Tommy Pilling and Kyle Kelly.

More functional than flashy, Laffey can be a reliable presence for the academy in years to come.