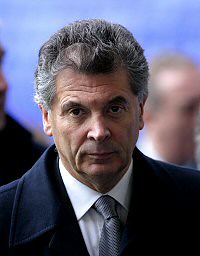 Following the departure of Damien Comolli this morning, there has been much speculation surrounding a replacement for the former director of football at Liverpool.

One name that has been mentioned is former Arsenal vice-chairman David Dein – who was linked with a role at Anfield shortly after FSG took over the club in late 2010.

It was reported then that principal owner John W. Henry had met with Dein – who transformed Arsenal with the appointment of Arsene Wenger and management of their new Emirates Stadium. Wenger described Dein’s departure as “as a sad day for the club”.

Liverpool chairman Tom Werner said of Comolli’s departure “Part of the reason we made this decision now is because we want to start the process of finding an excellent replacement.”

With a decision on Liverpool’s stadium expected this summer, the appointment of Dein could coincide with him overseeing such developments at the Club.

Dein was spotted alongside Comolli and LFC managing director Ian Ayre at Ewood Park on Tuesday night and was in attendance at Anfield for the draw with Aston Villa last weekend.

Ayre has been given the backing of Tom Werner, but his role at LFC could be changed to accomodate Dein’s arrival.

What do you think? Let us know in the comments below.