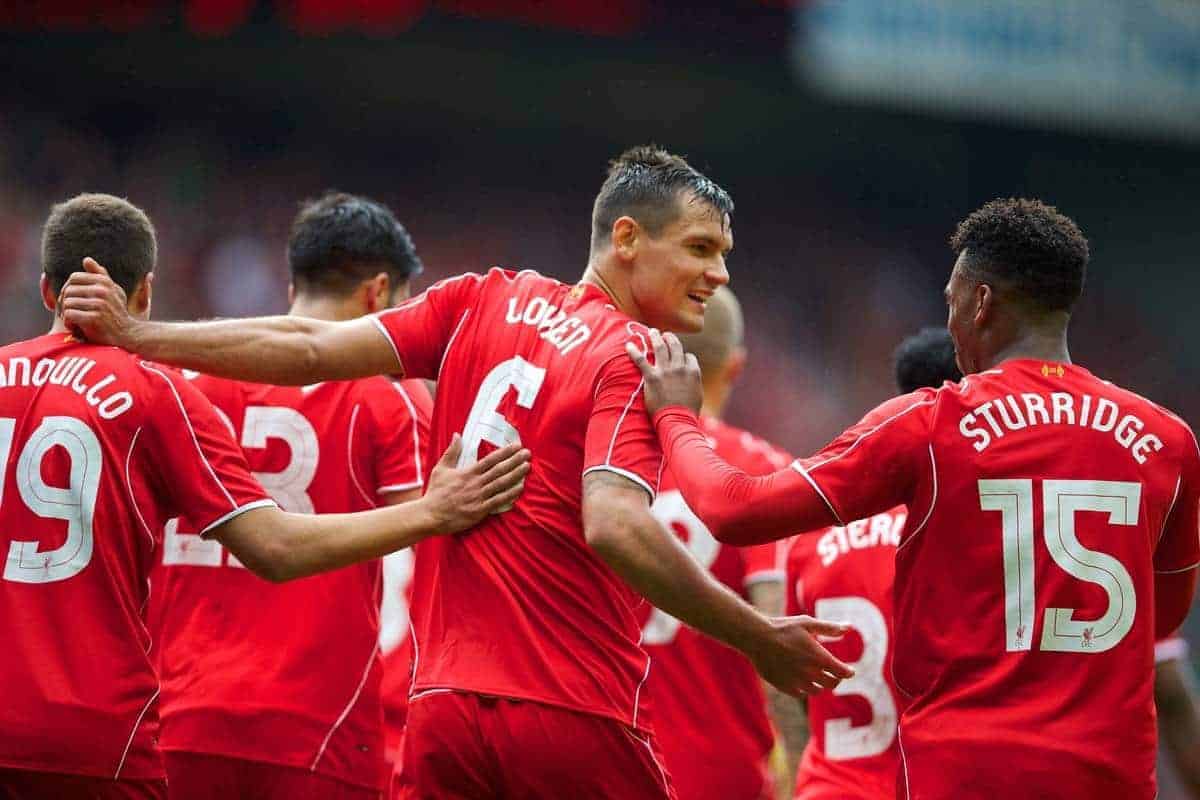 Following Brendan Rodgers’ comments after Dejan Lovren‘s debut on Sunday, Jack Lusby asks whether the Croatian is the Jamie Carragher replacement Liverpool have been waiting for.

It may have taken the club around a decade, but following the signing of Alberto Moreno, in an initial £12 million deal, from Sevilla, Reds fans can hopefully sleep safe in the knowledge the club’s back line is complete.

Central to this realisation is another summer signing, Croatian centre-back Dejan Lovren.

The 25-year-old joined the club from Southampton last month, and has immediately drawn comparisons to Liverpool legend Jamie Carragher.

The Northern Irishman, speaking to journalists in his post-match press conference, lavished praise on the cultured centre-back, claiming “Dejan was perfect. He is exactly what I’ve been looking for since Jamie Carragher left.”

When Carragher retired last summer, it was abundantly clear this was not only a player, but a character, who would take some replacing.

Rodgers clearly believes so, but is Lovren truly the replacement Liverpool have been waiting for.

A Debut to Remember

What a start to life at Anfield for @DejanLovrenLFC6 yesterday, with a headed goal on his first #LFC appearance… pic.twitter.com/WCLgeGzNq0

Signed during the Reds’ lucrative pre-season tour of the USA, Lovren was unfortunately denied the opportunity to join up with his new teammates due to visa issues; this wasn’t wholly disastrous, as Seba Coates thrived in his stead.

This meant that the Croat had to wait until the beginning of May to make his long-awaited debut for the club.

Deployed as the left-sided centre-back alongside Martin Skrtel, Lovren performed with all of the enthusiasm clearly pent up waiting on the Mersey shores for the first-team’s return.

An uncompromising tackler with a canny ability to read the game and act with intelligence and aggression, Carragher was renowned as one of the toughest centre-backs in world football.

Against Der BVB, Lovren took matters into his own hands, in a performance reminiscent of the raw qualities of the Reds former No. 23.

In a defence alongside Javier Manquillo, Glen Johnson and Martin Skrtel, the Reds needed a leader—throughout the contest, Lovren could be seen barking instructions and encouragement to his defensive partners.

Following the game, Skrtel told LiverpoolFC.com that “[Lovren] will make us stronger, so I really welcome his arrival – and it will only make me work harder.”

Rodgers continued his praise by outlining Lovren’s qualities, summarising: “He is a dominant, No.?1 centre-half, who reads the game well, offers good guidance to the back four and the rest of the team.”

Furthermore, much like Carragher, Lovren showed his ability with the ball at his feet, particularly with an incisive pass towards Philippe Coutinho to help set up Daniel Sturridge’s opener.

The Brazilian received the praise, but Lovren was as much involved as Coutinho, cutting through the Dortmund midfield with consummate ease.

Elsewhere, Rodgers detailed the centre-back’s aerial expertise: “Just like he showed against us last year he’s dominant in the box – both in ours and the opposition’s – and I thought he was excellent.”

Physically and mentally, against Dortmund on Sunday Lovren looked every bit the on-field Carragher replacement the Reds have been waiting for.

Alongside this performance-related comparison, so early into his Reds career Lovren is exuding the raw enthusiasm and commitment to the club that typified Carragher’s tenure at Anfield.

The centre-back was quick to pledge his unerring loyalty to the club following his signing.

In an early interview, Lovren told LiverpoolFC.com that:

“It’s a dream come true. I’m happy and glad to be here… After I played at Anfield last season, I said to myself: ‘One day I hope I’ll be able to play here for Liverpool’. The fans will know from the first minute that I’m a player that will give 100 per cent on the pitch.”

This is a commitment continued through Lovren’s frequently-updated Twitter account, with the Croat expressing his joy at his debut and a love for the city of Liverpool.

Carragher would bleed on the pitch for the club, literally, and this is due to this passion for the city, the club and its fans.

Finally, the most convincing facet to this comparison is a seal approval from the Reds legend himself.

Speaking to the Liverpool Echo, Carragher outlined his belief that Rodgers had found “the leader the Reds need.”

This can be paired with an expert analysis of Lovren’s game by Carragher and Gary Neville, courtesy of Monday Night Football—the 36-year-old recognised at the time, prior to Liverpool’s interest in the Croat, that this centre-back was the real deal.

Continuing his Lovren-manifesto via the Echo, Carragher tipped the defender as a future Liverpool captain, claiming:

“Centre-backs normally make great captains… You look at him and he has the potential to make a big powerful impact at the back and that’s what Liverpool need.

“The game we highlighted on Monday Night Football was at Old Trafford and he was coming up against Wayne Rooney and Robin van Persie, two world class strikers, and he more than held his own – in fact he came out on top.

“I don’t think the price tag is the biggest thing in the world it’s more how he deals with being a Liverpool player, what’s expected of him and the fact that he’s been brought in to improve the side.”

Carragher clearly joins Rodgers in the belief that Lovren can be Liverpool’s new leader, now it’s up to the centre-back to prove he has the mettle to back up these assertions.

Is Dejan Lovren the perfect replacement for Jamie Carragher? Let us know in the comments below.