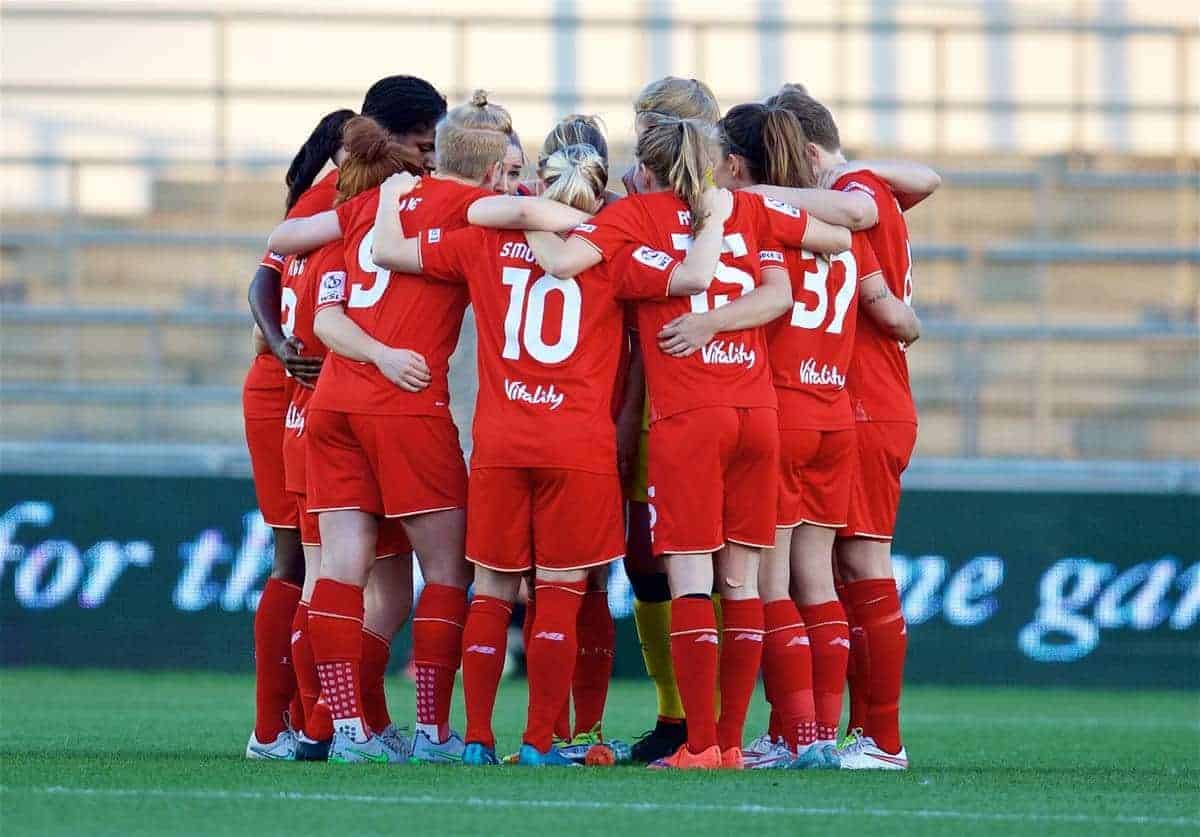 Liverpool Ladies’ campaign came to a disappointing end in October, as a run of 4 defeats saw the Reds finish 7th in the league, and were knocked out of both the Continental Cup and the Champions League.

Any hopes of securing a third successive title had disappeared during the second half of the year as Liverpool’s squad was heavily decimated by injury, leaving departing manager Matt Beard relying on younger players to fill the gaps.

These players now have valuable experience playing at the top level and, as the established first teamers return from injury, newly appointed boss Scott Rogers can now look ahead to next season and getting Liverpool back at the right end of the table.

The final league game of the season seen Liverpool travel to the already relegated Bristol Academy having already beaten the Southerners twice in 2015 – just a couple of weeks earlier Natasha Dowie had put 4 past the club to send them crashing out of the Continental Cup.

On the evening the Reds started on the back foot and fell behind after Anghared James’ low cross was converted by Caroline Weir, slotting the ball past the returning Danielle Gibbons. The keeper marking her return from brain surgery in the summer and called into the squad after Libby Stout had suffered a knock in the previous league game.

Liverpool drew the score level through a Hannah Short own goal after Rosie White’s ball into the box was deflected over the line by the Bristol defender however the home team retook the lead shortly before half-time as Christie Murray lifted the ball over Gibbons – who then denied Weir making it 3 with a quick reaction save.

Into the second-half however Gibbons could no longer keep Weir at bay as she added her second.
With the score at 3-1 Dowie had a goal disallowed for offside after bright play by Ingrid Ryland and a clever through ball from Katie Zelem, Bristol themselves also had a goal ruled out for offside before substitute Tatiana Pinto added the 4th.

Dowie continued working tirelessly up front and pulled a goal from a corner to make the final result 4-2.

Just 3 days after defeat in Bristol, Liverpool travelled to Brescia, Italy for their Round of 32 tie.
The only goal of the game came in the first-half from Italian centre-back Sara Gama whose long range effort bounced out of Gibbons’ grip and narrowly over the line.

Until that point Liverpool’s defending had been resolute, Ryland standing strong against the Cristiana Girelli and Valentina Cernoia combination on the right and Omarsdottir also wise to the Italians tricky passes- twice intercepting at the edge of the area.

At half-time Ashley Hodson made way for Asisat Oshoala and the Nigerian started brightly, chasing balls over the top and almost setting up Dowie but the flag for offside was up.

As the half wore on it was all Liverpool but the away goal would elude the Reds, who also lost captain Gemma Bonner to injury – it was announced after the game that Bonner would miss the remainder of the season, including the upcoming Continental Cup semi-final and indeed the second leg of this tie – with development squad centre-back Shannon Beckwith making her first-team debut.

A week later in Widnes Stout was back as was Martha Harris who had missed the Cup semi-final days earlier yet once again, luck just was not on Liverpool’s side.

Brescia took the lead against the run of play, Sabatino winning possession midway through the Liverpool half and setting up Barbara Bonanesa who scored that all-important away goal from 6-yards out.

The Reds had a clear penalty for handball not given in the first-half after Zelem’s goal bound shot was hit away by Roberta D’Adda and Oshoala had an excellent second-half header disallowed for an apparent offside – though Oshoala herself was not in an offside position and presumably the judgement had gone against Dowie, who was not interfering with play and making this a frustrating decision.

Fara Williams came from the bench to play the final 25 minutes and came closest to pulling a goal back, her swinging corner dropping at the near post but into the arms of the keeper.

Ultimately, and not helped by poor refereeing, Liverpool exited the Champions League at the Round of 32 for the second year.

Gemma Bonner, Corina Schroder, Becky Easton, Libby Stout, Martha Harris, Asisat Oshoala, Line Smorsgard, Kate Longhurst. On any other day those 8 players would be in Liverpool’s starting 11 however with each injured they all watched from the sidelines.

Beckwith was handed her first start after impressing in Italy and partnered Satara Murray who also impressively stepped up in Bonner’s absence.

In the opening minutes Dowie had a shot deflected wide, White’s corner came back off the crossbar and Murray narrowly headed over the rebound.

But Notts would race into a 2-goal lead before the break, Ellen White scoring twice as she first headed former Everton defender Alex Greenwood’s set piece into the back of the net and then tucking away Dani Buet’s cross.

Liverpool worked hard to get themselves back into the game, White shooting wide after receiving the ball from Omarsdottir, Zelem controlling the midfield with a number of driving runs and creating chances for her team mates – one pass straight through the defence to Hodson and putting through Dowie, who was only denied by Carly Telford.

Notts ran out 2-0 winners, into the final where they were beaten 3-0 by Arsenal Ladies on Sunday 1 November.

Overall a frustrating season for Liverpool, the Reds could never really get going – the highlight of the campaign the 3-1 win away at Arsenal, a game that felt a real turning point before injuries took hold and ruined a promising squad, one that Beard had lauded as his best yet at the start of the year.

Liverpool return for pre-season in January under new manager Scott Rogers. Scott has been at the club for 3 years, working alongside Matt as assistant manager and closely with the club’s youth teams and has previously managed Blackburn Rovers Ladies.