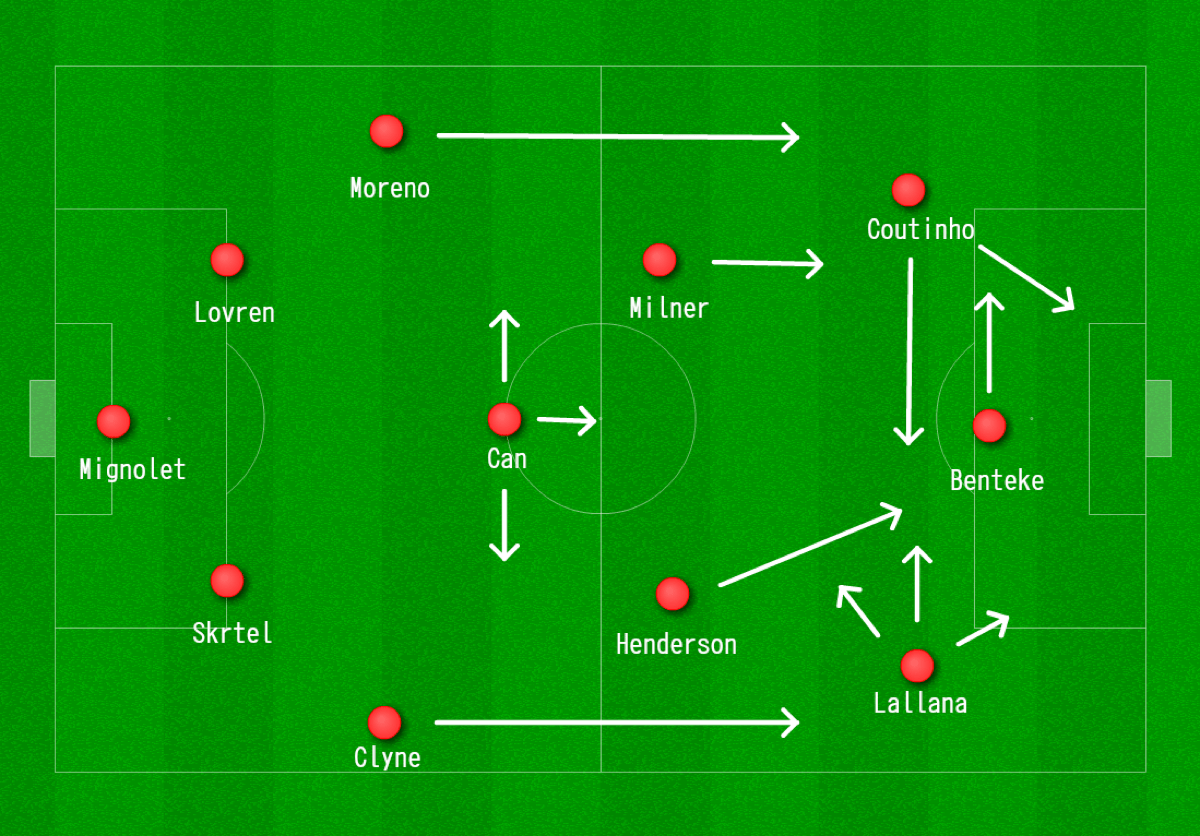 Jurgen Klopp‘s dynamic 4-3-3 was undone by poor defensive errors in Sunday’s 2-2 draw with West Bromich Albion, prompting some in-game tweaks from the German. With the return of Jordan Henderson and Philippe Coutinho providing Klopp with a host of top-level options in midfield and attack, the German opted for a 4-3-3 formation for Sunday’s clash with West Brom.

This saw Henderson pushing forward from the right-hand side of the midfield three, covered by an imperious Emre Can in the holding role.

Henderson’s energy and intelligent movement provided Liverpool with an opener on 21 minutes, overlapping with a great run into the box to convert Adam Lallana‘s knockdown.

Lallana’s role at Anfield was much the same as in recent weeks, with the England midfielder pushing the Baggies’ defence back from a right-sided attacking role, drifting inside to combine with Henderson and roving right-back Nathaniel Clyne.

Coutinho performed a similar role on the opposite flank, but it was Christian Benteke whose duties were most intriguing.

Though the Belgian produced another dismal performance as Liverpool’s lone striker, his drifting towards the left-hand side of the penalty area, on the shoulder of a shaky Gareth McAuley, showed Klopp’s tactical work in action.

But with goals from Craig Dawson and Jonas Olsson either side of half-time punishing Liverpool’s defensive frailty from set pieces, Klopp was forced to go all-out in search of an equaliser.

Prompted by the withdrawal of the injured Dejan Lovren following a poor challenge from Craig Gardner, Klopp switched to an attacking 4-2-3-1 formation, bringing Divock Origi on in the Croatian’s place.

This saw Can drop into defence and Henderson and Milner form a two-man midfield.

Origi was deployed on the left flank, with Roberto Firmino and Jordon Ibe—replacements for Lallana and Coutinho—swarming around Benteke as Liverpool pushed for a goal.

Providing pace and direct running on the left-hand side, Origi was Liverpool’s brightest attacker in the closing stages, with Ibe mirroring his movement cutting inside from the right flank.

Picking up the ball on the wing deep into stoppage time, Origi moved into the centre of the pitch and fired a hopeful effort on goal.

Aided by a deflection, the ball soared beyond Boaz Myhill to give Liverpool an unlikely leveller.

Roared on by chants of “attack attack attack!” Klopp’s side pushed for a winner, but it was not to be on an afternoon that saw a positive tweak help secure a valuable point.