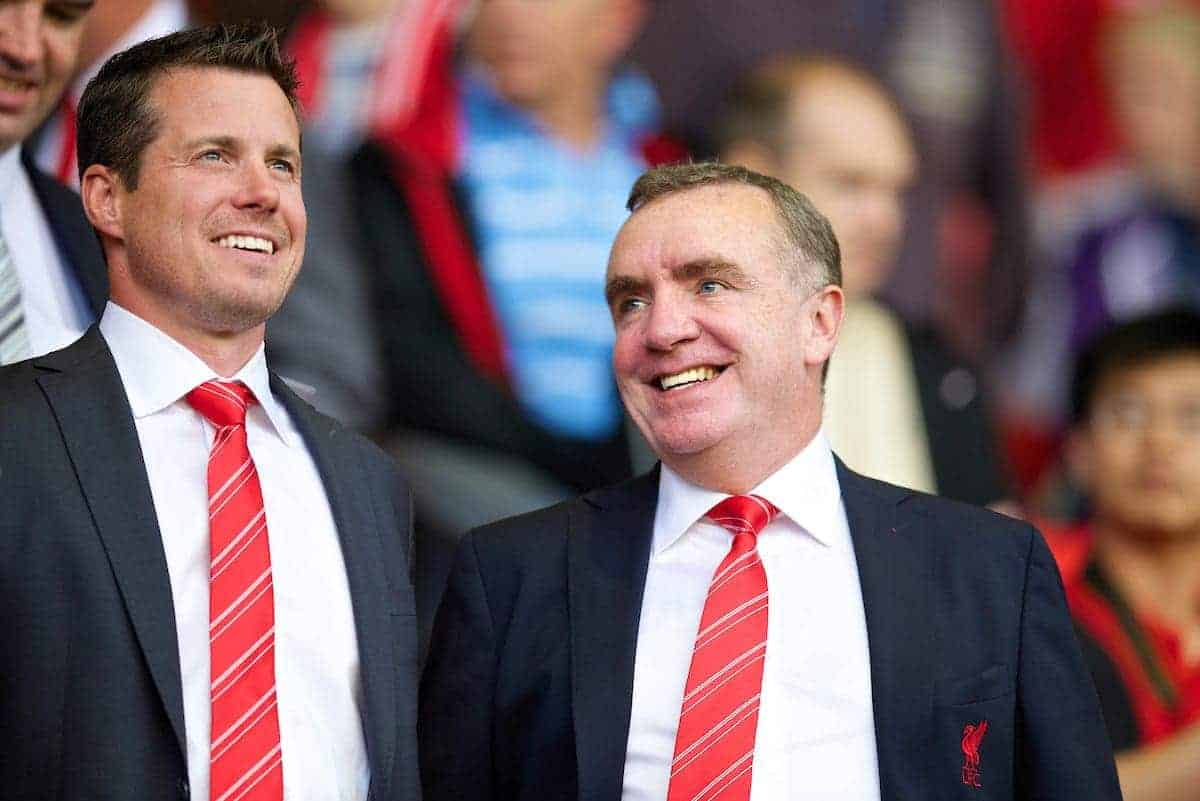 Ian Ayre is set to leave Liverpool at the end of February, three months ahead of schedule, as Liverpool restructure the club’s senior hierarchy.

In March 2016, Ayre announced his plans to leave LFC and has since then completed a ten-month transition plan to put a structure and operating framework in place that will ensure continued stability across the club and pave the way for the new CEO who is expected to join in the summer.

During his ten years at Liverpool, Ayre has helped to transform and modernise the club, leading a complete overhaul of Liverpool’s financial, commercial and operational structure.

He played a key role in masterminding the successful exit of previous owners, Tom Hicks and George Gillett, and brought much-needed stability across the club following the Fenway Sports Group takeover in 2010.

More recently, he played a pivotal and crucial role in not only the redevelopment of the Main Stand but as a key partner in the wider regeneration of the Anfield area.

Ayre will leave LFC at the end of the month to join TSV 1860 Munich on a date to be confirmed.

Earlier this season, changes were made to the football structure of the club with Liverpool’s owners moving to significantly extend the contract of Manager Jurgen Klopp and promoting Michael Edwards to the role of Sporting Director.

As part of this plan, Academy Director Alex Inglethorpe also agreed to extend this contract keeping him at the club for the long term. Also last year, and as part of this structured transition period, FSG promoted Billy Hogan and Andy Hughes to take on more of the off pitch responsibilities.

Hogan, previously Chief Commercial Officer, now also assumes the title of Managing Director and has seen his portfolio increase to include management of the Club’s marketing and digital media departments.

Hughes, previously Chief Financial Officer, now Chief Operating Officer will lead all of the club’s operational matters as well as maintaining responsibility for the finance operations.

“Although this transition has been nearly a year in the making, today is still a difficult day—we are officially saying goodbye to Ian. On behalf of John and Tom, I would like to place on record the outstanding contribution Ian has made to Liverpool Football Club over the past ten years.

“It goes without saying that his leadership of LFC has been instrumental to the Club’s progress under our ownership. It is a measure of his character and his commitment to LFC that we have been able to collectively plan and execute such a gradual, natural transition. On both a professional and personal level, he will be missed.

“Over the past year, we made a number of changes to our management structure by promoting several of our top employees to more senior positions in recognition of their exceptional service to LFC. Though some of these changes are already public, today we are formally announcing the promotion of Billy Hogan to Managing Director and Chief Commercial Officer, and Andy Hughes to Chief Operating Officer.

“The promotions are a reflection of their first-rate performance as executives and carry additions to their respective roles and responsibilities. These changes have already ushered in improvements to the Club’s operations and they will also serve to ensure management stability during the transition to new executive leadership.

“The last step remaining is to conclude the process of identifying and hiring a successor to Ian. We are very pleased with the search progress and fully expect to have our new CEO in position by our original deadline of the summer 2017. We are quite confident that LFC will have the right structure and the best people operating within that structure to fill the lofty ambitions of LFC and its supporters.”

Ayre himself said: “There is no greater professional satisfaction for me than to leave Liverpool Football Club in much improved health throughout than when I joined the Club in 2007. This has always been more than just a job for me because of the emotional connection I have with the place.

“So, the only yardstick that has ever mattered, for every decision I have taken here, is whether or not it is in the best interests of Liverpool Football Club.

“My journey here over the last decade has been a rich mix of challenges and opportunities, a journey only made possible by the outstanding people I have had the honour to work with along the way both inside and outside the Club. As the Club transitions to its next chapter, I made clear some time back that I felt that 2017 was the right time to step aside.

“As the Club’s new structure starts to unfold, this is a natural point for me to say goodbye to the role of Chief Executive and to many friends, but my love and support for this great football club will continue as it has my whole life.”

Liverpool will announce the new Chief Executive Officer in due course.