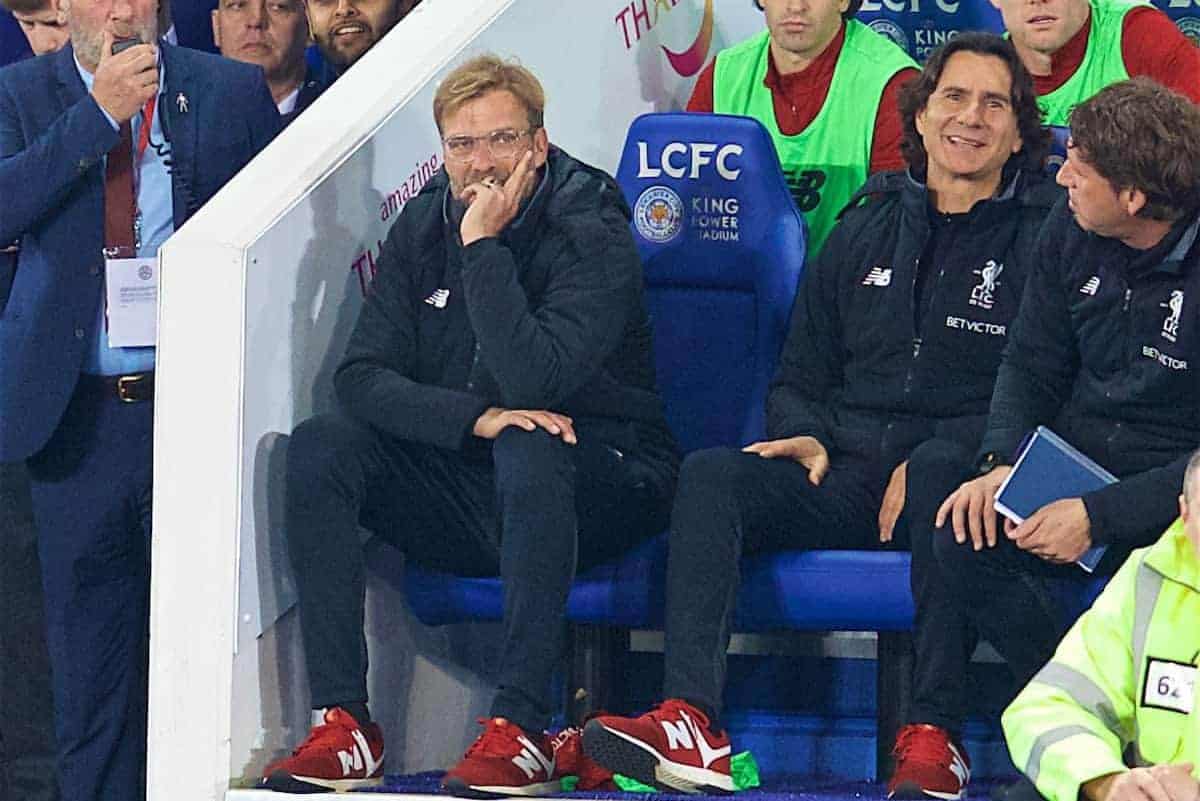 The media criticised Jurgen Klopp for failing to address Liverpool’s weaknesses as the Reds came unstuck by familiar issues in a 2-0 loss at Leicester.

The Reds exited the League Cup after suffering a third straight loss at the King Power Stadium, extending the winless run to four games.

Second-half goals from Shinji Okazaki and Islam Slimani ensured of the Foxes’ progression and punished Klopp’s side for failing to turn dominance into goals in the first 45.

It was a very disappointing night as the Reds once again struggled due to familiar issues – failing to take chances at one end before giving away soft goals at the other.

This sentiment was very much echoed in post-match reports, and here’s how the media assessed the cup defeat.

The watching journalists felt that while League Cup elimination isn’t the be all and end all, the manner of the loss was a real concern – and also discussed the numerous negatives of the performance. On this, the Guardian’s Stuart James wrote:

The Carabao Cup is anything but a priority for Klopp, especially given the demands of the Champions League, but it still felt alarming to see Liverpool, for whom Alex Oxlade-Chamberlain made his first start since joining from Arsenal, inexplicably lose their way in the second half.

A side that hasn’t won silverware for five years cannot afford to turn its nose up at any trophy, and going out with a whimper like this is simply not acceptable. The second-half performance was abject.

Again, the story centres around a lack of excellence in both boxes, with the Reds boss admitting he was “sick” by the way his side continue to concede goals that can be avoided.

Disagreeing with Klopp’s recent assessment, the Liverpool Echo’s James Pearce believes a lack of defensive quality, rather than concentration, is costing the Reds:

Klopp is adamant it’s about lapses in concentration rather than a lack of quality but the evidence increasingly suggests otherwise.

Klopp’s faith in the personnel he opted to stick by this summer simply isn’t being repaid with performances on the field.

However, This Is Anfield’s Karl Matchett found a ray of light in the promising partnership between Andy Robertson and Philippe Coutinho:

Back into the starting lineup, Robertson showcased his big strengths on the ball by delivering cross after cross into dangerous zones, at least one of which really should have resulted in a goal.

Coutinho was constantly wandering infield, linking play and looking to get his usual long-range shots at goal, leaving space for his overlapping left-back to exploit—and that’s exactly what Robertson was happy to do.

After seeing Liverpool fall foul of the same problems once again, reporters were heavily critical of Klopp for failing to spark improvement – with some journalists now questioning the German’s methods.

This was Klopp’s team’s fourth successive game without a victory, and while defeat in the Carabao Cup third round is not the season’s worst outcome for Liverpool it does pose uncomfortable questions about the recruitment and gameplan so early in the season.

Did Jurgen Klopp really want to win the Carabao Cup? Or was he trying to use Tuesday night’s third-round game to try and play his side into some sort of form after three consecutive drab results?

Either way the German was clearly feeling the heat when he named the likes of Jordan Henderson, Coutinho and Alex Oxlade-Chamberlain in a relatively strong starting XI.

The BBC’s Alex Bysouth felt the decision to substitute Coutinho changed the game:

Coutinho, having returned to the Liverpool side for the 1-1 draw with Burnley on Saturday, was by far the best player on the pitch in the first half as he sauntered between the lines to dictate the tempo of the Reds’ attacks.

But Liverpool boss Jurgen Klopp opted to replace Coutinho with Ben Woodburn at the break and, despite some impressive running from the 17-year-old Wales international, Liverpool lost their flow.

ESPN’s Mark Ogden criticised Klopp for failing to improve Liverpool defensively at any time during his tenure:

Klopp may be “sick” of seeing his team concede such goals but as a former defender, when will he do something about it?

But Liverpool simply cannot defend properly and that is down to Klopp’s tactics, selection and recruitment.

And Ogden was also critical of Klopp’s recruitment, assessing the German hasn’t made enough signings in the areas most in need:

Quite simply, he has not recruited the commanding centre-half and dominant midfielder that Liverpool have required for years, instead spending on the likes of Salah and Mane: both have been astute buys but arguably not as important as the missing links in the defensive half of the team.

And Ogden later gave clear indication on what he feels Liverpool need:

A defensive leader in the mould of van Dijk would bring organisation and leadership to the back line, just as a more dynamic midfielder than Jordan Henderson would inspire those around him and provide a more solid shield for the defenders.

The Reds’ post-international break blip is in danger of becoming something much more serious. Klopp has to earn his corn by quickly repairing battered belief and instilling greater organisation.

The media offered mixed views on individual performances, with Robertson and Dominic Solanke earning praise but criticism coming for plenty of others – including Alex-Oxlade Chamberlain. Bartlett felt Robertson showed why he should be first choice at left-back:

Tonight he showed exactly why he deserves an extended run in the team, finding lots of joy going forward and whipping several wonderful deliveries in that his teammates really should have finished off, particularly early on.

The Mirror’s Joe Mewis was among those to see potential in Solanke:

Tonight saw Dominic Solanke make his first-ever start in senior English domestic football and, while he was a willing runner and hard worker, sometimes struggled to impose himself on the Leicester defence.

There’s no denying his potential though and every minute he gets under his belt will serve Liverpool well in the future.

In the first half in particular, Gomez was excellent, his strength underlined early on when, after losing out to Islam Slimani, he swiftly outmuscled the Leicester striker to regain possession.

If there’s one positive to be taken from the evening, it’s that Gomez has now become a centre-back option.

This Is Anfield’s James Nalton was impressed with Danny Ward, and feels the keeper presented a case to be No.1:

Catching crosses, coming out of his area to clear up loose balls and distributing the ball quickly enough to please even the most impatient fan—it was a good performance from a goalkeeper who has an argument to be No. 1 for both club and country.

Oxlade-Chamberlain, so keen to impress, was guilty of overdoing it with the flicks and tricks, a disappointing display hampered by poor decision-making and, perhaps most alarmingly, the fact he didn’t look anywhere near as in shape as his team-mates.

Usher was unimpressed with Jordan Henderson, criticising the captain’s lack of leadership:

Nowhere near good enough from the captain. Didn’t do anything to drive his team on, was sloppy with some of his passing and was nowhere to be seen for Leicester’s opening goal. When Liverpool needed leadership, he offered none.

And finally, This Is Anfield’s Henry Jackson thought Jon Flanagan showed he is no longer good enough for Liverpool:

The 24-year-old started at right-back as Klopp rotated his squad, but he was nowhere near good enough in all facets of his play.

On the ball, he looked a long way short of top quality, and his pace and attacking thrust was non-existent.