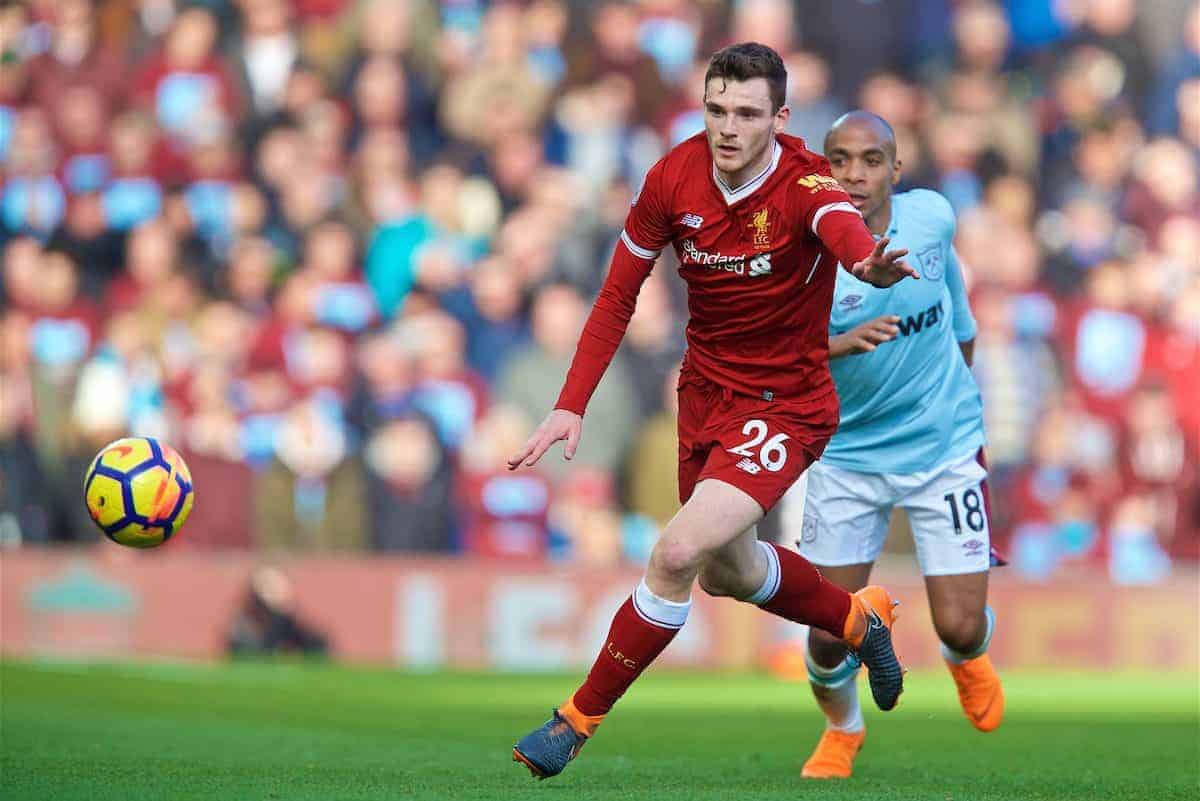 After another excellent individual performance in Liverpool’s 4-1 win over West Ham, Andrew Robertson paid tribute to the support of Jurgen Klopp.

Robertson joined the Reds in an initial £8 million deal with Hull City in July, offset by Kevin Stewart‘s £4 million switch to the KC Stadium that underlines a bargain fee.

But the Scot did struggle to impose himself in the opening months of the campaign, making just three appearances before the start of December, with another five as an unused substitute.

Now, however, Robertson is a first-team regular with 18 starts to his name, and his form is rapidly improving.

Though he was boosted by a timely injury to previous first choice Alberto Moreno, Robertson has arguably cemented himself due to impressive displays such as against the Hammers on Sunday.

Speaking after that convincing victory the 23-year-old told LiverpoolFC.com how he “had to be patient,” approaching Klopp to ask: “‘What do you think I’m lacking that I need to get in the team?’”

“He told me a few things that will obviously stay between us that I had to work on,” he added.

“I worked on them in training but Alberto was playing well, you can’t hide away from that fact and it was unfortunate that he got injured. ”

Largely due to Moreno’s absence, Robertson has started in all but one of the last 14 games in the Premier League, and believes he is “building in confidence” as a result.

“I feel at home now, which did take a wee bit of time, but I’m happy to be here and I just hope that I can keep kicking on,” he concluded.

Ahead of Robertson’s arrival, Hull supporter Joel Meloir told This is Anfield that he “is still learning the position as he develops and the defensive side is certainly a weakness to his game.”

Meloir described him as “a pretty similar signing” to Moreno, and warned how “a lot of the frailties that Moreno has shown, Robertson also has.”

This highlights why Klopp presided over a slow transition for Robertson, with the demands on his full-backs in both defence and attack clear.

It is likely that the manager’s advice has prompted Robertson to be more diligent in Liverpool’s half, but it could also be seen in the improvement in his delivery from out wide.

Robertson’s debut in the 1-0 win at home to Crystal Palace saw him earn plaudits for his crosses, but it is telling that he failed to register an assist.

While the quality of his attacking support was never in question, Sunday saw Robertson lay on just his second goal in 18 games as he better measures his opportunities.

This has been as been as influential as his growing solidity at the back, with the ex-Tigers left-back now more in tune with Klopp’s system, and Liverpool are benefiting hugely.