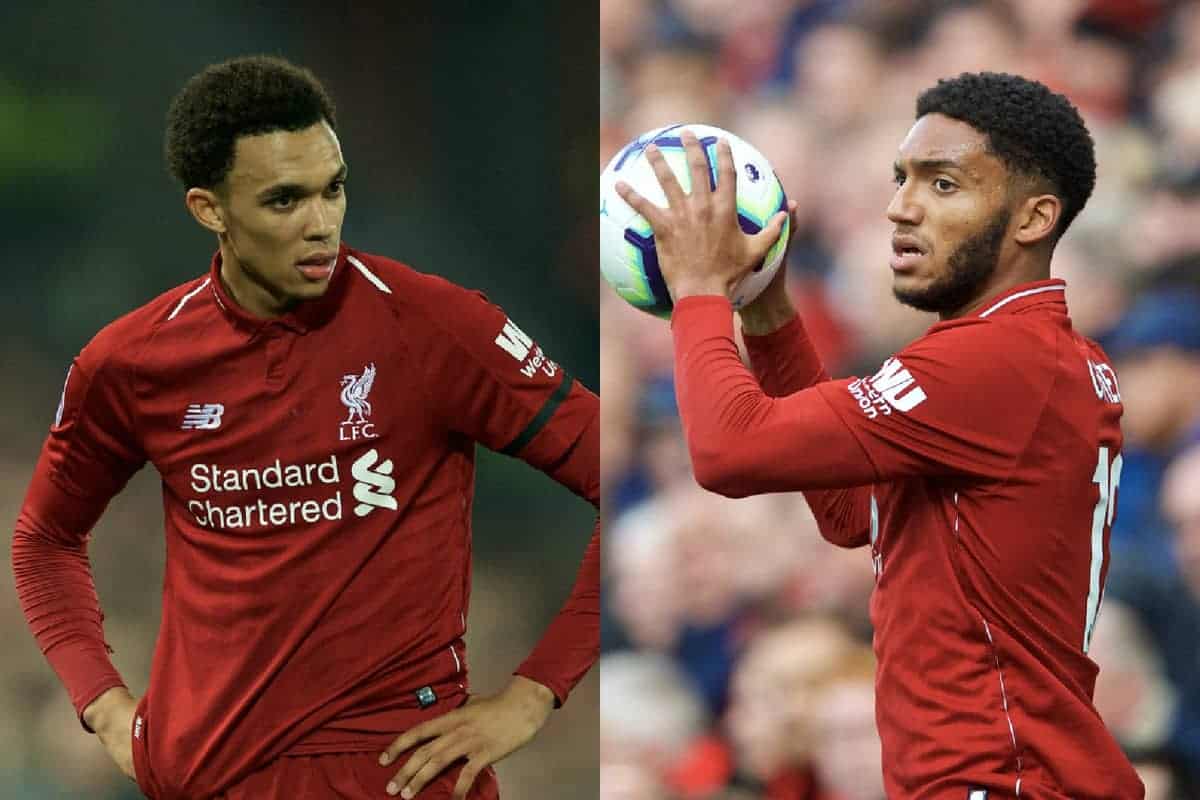 Despite his consistency in the final third, Trent Alexander-Arnold has shown signs of fatigue of late that should prompt Joe Gomez‘s return for Liverpool.

In his past five games, the Reds’ No. 66 has laid on four goals, bringing his tally for the campaign up to 10 and placing him just behind Andy Robertson (11) and Mo Salah (12) in the creative stakes.

Alexander-Arnold is among the nominees for the PFA Young Player of the Year award, and is undoubtedly one of Jurgen Klopp‘s key players.

Due to Gomez’s fractured leg, which kept him out for four months, Alexander-Arnold has played more than double the amount of minutes as his fellow defender (1,480).

But Klopp’s faith in the 20-year-old can be considered both a blessing and a curse, as in recent games he has seemingly struggled with the pace.

This was evident as he was frequently caught out by Cardiff’s Nathaniel Mendez-Laing—formerly of Peterborough, Portsmouth, Shrewsbury, Cambridge and Rochdale—in Liverpool’s 2-0 win in south Wales.

This could be due to managers highlighting the youngster as a potential weak link in Klopp’s defence, or perhaps simply aiming to avoid Van Dijk.

But with Liverpool in the midst of the most important stretch of the season and facing a varied group of fixtures, it does pose the question of whether Alexander-Arnold would benefit from a brief rest.

This could therefore hypothetically rise by 540 more if the Reds reach the Champions League final.

At 20, this is a vast amount of football to be playing, particularly in such a high-intensity system which places such emphasis on the full-backs both in defence and attack.

Only one player aged 20 or under has played more minutes than Alexander-Arnold in the Premier League (2,199), that being Declan Rice (2,836), and only nine have in Europe’s top five leagues.

Considering he has also missed five games due to foot and knee injuries suffered in December and January, as well as travelling and playing once for England at the World Cup, this has been a very demanding season.

Alexander-Arnold even returned early from his summer break to join Liverpool’s pre-season, and the effects of a busy campaign were possibly evident as he was forced to pull out of Three Lions duty in March with a back complaint. 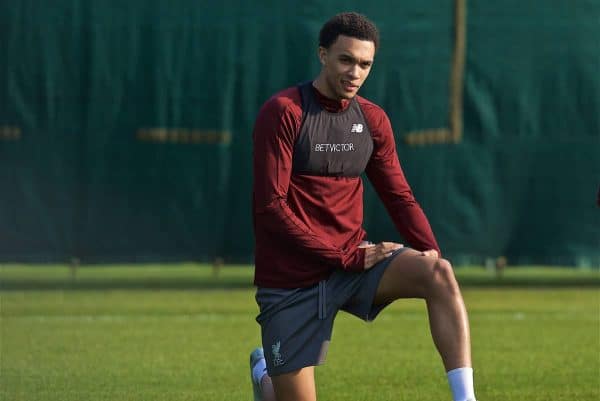 He had already played through the pain in the 3-1 win at Bayern Munich, but Klopp explained that there was “no other alternative” to him and Xherdan Shaqiri missing the international break.

It is clearly an issue the manager is aware of, and this is perhaps why—after a strange decision to keep him on despite picking up a knock in the warmup at Brighton in January—he eased Alexander-Arnold back on his return in February.

Regardless, with James Milner a hit-and-miss alternative, Klopp has reverted to a heavy reliance on the Scouser, and this has resulted in him playing the equivalent of four full games or more in both March and, so far, April.

In context of the season as a whole, Alexander-Arnold has played at least 70 percent of his available minutes in five out of nine months so far, and never below 50 percent despite his injuries: 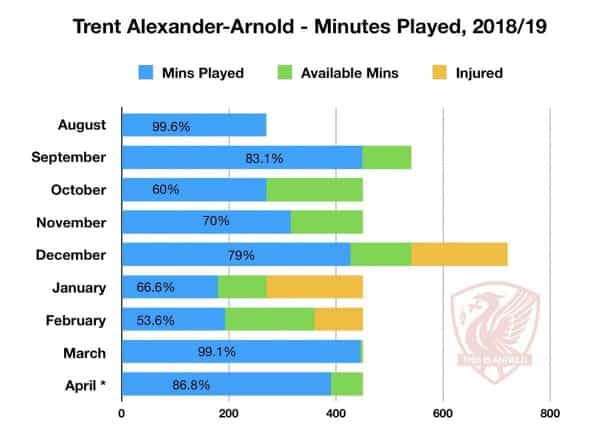 Klopp acknowledged this in November after substituting him at half-time in the 2-0 loss at Red Star—still only the third time he has been brought off before the last five minutes of a game in 2018/19.

The manager explained that he “has played constantly” after “really not a lot” of time off over the summer, and added that “it won’t be the first time or the last time in his life that everything isn’t 100 percent.”

It can be argued that, though his creativity has been useful, this is another one of those times.

Thankfully, Klopp is now able to call upon the player who replaced Alexander-Arnold at half-time in Belgrade once again, with Gomez firmly back in the fold. 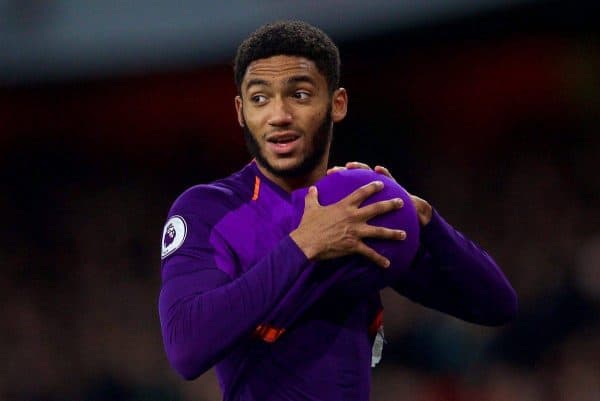 After such a lengthy layoff, Gomez has been treated carefully on his return, with a long period of reintegration at Melwood, an hour for the U23s at Leicester and two substitute appearances in a week amounting to 28 minutes.

Before his first senior outing since December, in the away clash with Porto, Klopp described Gomez as “absolutely” ready.

And crucially, he continued to explain that the 21-year-old was to be considered “an option” at right-back, despite his excellent performances at centre-back earlier in the season.

The strong form and consistent fitness of Joel Matip alongside Van Dijk has made Gomez’s route back into the lineup in his natural role more difficult, but has certainly made Liverpool’s run-in more comfortable.

There is a clear school of thought to suggest that easing a young player back in at centre-back in such a crucial stage, after four months out, is too big a risk. 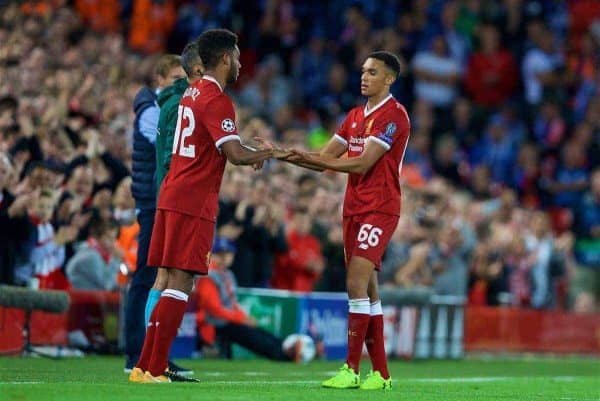 Instead, a return to alternating duties with Alexander-Arnold at right-back is the best and most sensible course of action for Gomez, before he can switch back in the summer.

Last season saw the pair trade places between bench and starting, both playing a similar number of minutes (Alexander-Arnold, 2,654; Gomez, 2,463) and therefore remaining fresh and allowing Klopp to tailor his side to specific challenges.

This should restart with Gomez against Huddersfield on Friday night, particularly given the No. 12’s size advantage, and there is a possibility he could be retained for the trip to Barcelona the following Wednesday.

Or, Klopp could opt to rotate them fixture by fixture, with the aerially superior Gomez preferred against three of the league’s top five sides in terms of long passes per game: Huddersfield (70), Newcastle (71) and Wolves (69).

Either way the benefits of Gomez’s return are clear, and could even be seen as timely for Liverpool, with Alexander-Arnold ready for a rest.