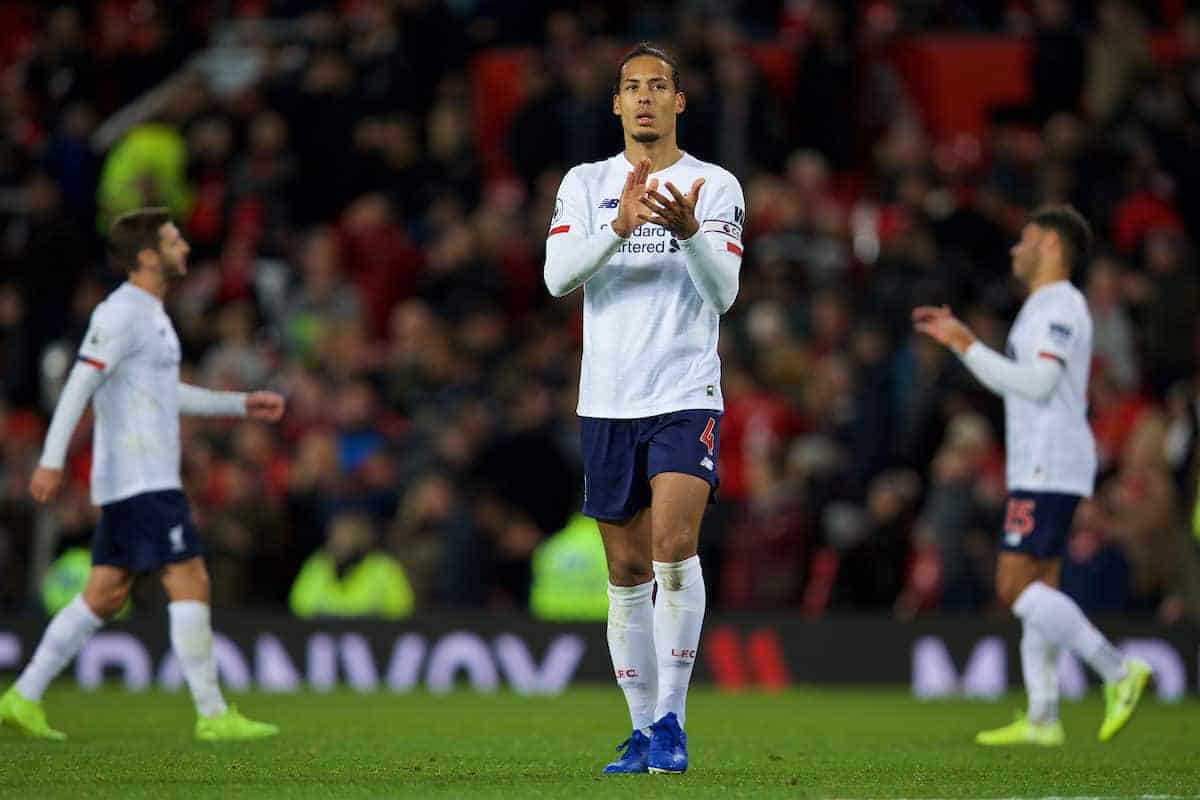 Liverpool dwelt too long on their pre-match “banana skin,” as they showed too much respect to a Man United side they should have comprehensively outplayed.

Our 100 percent record gone, a lesson learned in what we should be able to do upon this most pronounced of footballing occasions, and the overall feeling that our opponents aren’t going to be a threat to the Premier League title for many years to come.

Liverpool win this game if they don’t overthink it. Unfortunately, we overthought it.

No Mohamed Salah. Sadio Mane initially switched to the right, Jordan Henderson playing as a right-sided midfielder in acknowledgement of United’s wing-backs and our usually rampaging full-backs being either told to hold back or being forced to do so.

In this respect we made too many concessions to what is the worst United side I have seen in 30 years.

Play to our undoubted capacity and we win this one by a large margin. I fully believe that and given how the home side cramped with fear towards the end, Ole Gunnar Solskjaer’s players believe it too.

What we did, however, was talk ourselves out of commanding the landscape of this game.

Rather than putting out Salah’s shirt prior to the game in the dressing room, we’d have been better off broadcasting the fact he wasn’t playing a day before the game.

Let the opposition defence get a good night’s sleep, allow them to relax, permit them to wake up on Sunday morning to an idle stretch and the idea that their afternoon duties wouldn’t be quite so bad after all, only to hit them like a sledgehammer at 4.30pm.

Instead, opting for subterfuge by letting them think Salah was playing all the way up until the teamsheets were handed in simply gave United an unexpected boost before kickoff, with little time to let it play on their collective minds.

And it also bestowed an unnecessary compliment. It spoke of a respect that shouldn’t exist.

The football we now play has earned us the right to be arrogant to a degree.

Forget the VAR interjections into this game, it was all a sideshow. It shouldn’t have come to that particular brand of footballing pantomime.

We aren’t talking about a vintage United here, this is a version of them that wouldn’t be out of place in 1987.

I barely recognised half the 13 players who played an on-pitch role for them on Sunday. I have no need to observe United anymore. I was vaguely surprised to find that Ashley Young is still playing for them, even more surprised that he captained them.

This only provokes frustration though. Frustration that we didn’t go for the throat from kickoff.

What this one called for was one of those mad Andy Robertson runs as soon as the whistle is blown to start a game. One of those Exocet runs where he pursues the ball like a heat-seeking missile, until a beseeched opposing right-back puts it out of play for a throw-in.

We should have been eliciting very early panic from United, rather than playing into their hands like we did.

Misplaced passes, self-spooked, a disjointed approach and formation, it was all so needless against a team that didn’t play as well as the experts would have you believe.

For every comment made that Liverpool didn’t test David de Gea, how often was the returning Alisson forced into action?

A goal conceded that we can argue should have been overturned; a goal scored that was expunged. A turn of events that was rounded off by an equaliser being scored by an unlikely hero.

By stealth, Adam Lallana is making himself a likeable component of Jurgen Klopp’s squad.

Some delicious narkiness in his cameo appearance against Leicester has now been followed by a goal and a point scored at Old Trafford. Another option has made itself visible.

A testing run of league games will continue next weekend with the visit of Tottenham. A team that is out of sorts, in need of a boost in confidence, it might well be very similar in feel to the game we have just played in Salford.

They will also arrive at Anfield eager to gain some retribution for the events of the first Saturday of June, when we beat them in Madrid to a very big, very shiny trophy.

Genk are laying in wait first however, as the Champions League kicks back into gear.

They were picked apart by Red Bull Salzburg but held Napoli to a draw. We will need to be wary if we aren’t in a ruthless frame of mind.

Spurs beyond that is a bigger test than the one posed by United: opponents from north London that have done more in recent seasons to deserve the type of respect and introspection we displayed at Old Trafford.